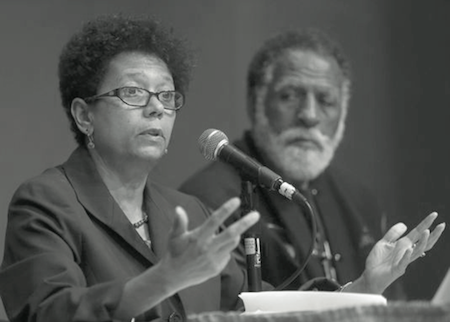 Dori J. Maynard (Photo: Jane Tyska, Oakland Tribune via AP)
Journalism lost a courageous soldier this week.
Dori J. Maynard, 56, who died Tuesday of lung cancer, didn't report in combat zones. She had no battle scars to show. Dori's fight was of a different kind: a fearless, passionate crusade to enlighten newsrooms on why we need to be committed to diversity and accuracy with every story we share. Her most powerful weapons were a clear, relevant message and the respected Maynard name.
Long before I met Dori, I had read about her dad, Robert Maynard, and his second wife, Nancy Hicks Maynard, both of whom were as close to black media royalty as you could get. Who didn't respect or want to be like the Maynards? They had enjoyed immensely successful, pioneering careers at two of the nation's most prestigious publications — Robert at The Washington Post and Nancy and The New York Times. The couple also, in an effort to give back in a bigger way, purchased the Oakland Tribune from Gannett, USA TODAY's parent company, in the early '80s. This was a historic first for blacks in the U.S. publishing business.
I'm not among the lucky ones to have known Dori, who was president of the Robert C, Maynard Institute for Journalism Education, for a long time. Our official introduction came in 2012, when she was in Washington, D.C., to discuss ideas for a diversity training program. We would later reunite at ethnic journalism conferences. I was impressed by her humble nature, her openness to perspectives that didn't always align with her own, and her intrinsic ability to connect so seamlessly with people from all walks of life. She had a magical presence that was disarming at times and a quiet competence that worked to her advantage in her efforts to engage and persuade.
And she was never short on sharing thoughts about how newsrooms could do better — even from a hospital bed, as Aug. 17 tweets about the tumult in Ferguson record:
"@MarceaSmiles @CNN in hospital, so have very limited options. Perhaps I should stop complaining and be glad I'm getting any news!"
"Is anyone else finding @CNN 2 a.m. EDT reporting on #Ferguson just painful in its lack of depth?"
I always enjoyed connecting with Dori. When you ran into her, you were sure to learn something about yourself and the world around you. No person or news organization was exempt from her constructive scrutiny. She was always teaching, on a mission to tell her story and help newsrooms tell better stories.
And I learned through our chats that Dori's work was about more than just protecting a father's legacy. Educating journalists on the importance of inclusiveness was her life's calling. According to the Maynard Institute website, right up to the day Dori died "she was discussing plans with a board member to help the institute thrive and to attract funding to support that work." Her dedication to diversity was her focus — in sickness and in health — and likely led her to her decision to keep the spotlight away from her physical battles.
Like so many industry colleagues, I'm still in shock that our Dori is gone. I imagine the same shock rocked newsrooms when Robert Maynard died in 1993. Ironically, he, too, was only 56 at the time when cancer claimed his life. Both so young. So much fight left. Many more untold stories to share. But the Maynard battle cry still rings to all who will listen and heed the call:
Dori's voice and her compassion for the seldom heard helped to elevate much-needed conversations in newsrooms and communities across the country. But above all, in the Maynard fashion, she was a warm and caring person who gave tirelessly and unselfishly of herself for a greater good.
I will miss Dori Maynard, but the Maynard legacy to promote diversity in coverage is a fight we all share — and it's just one more way to honor a life well-lived.