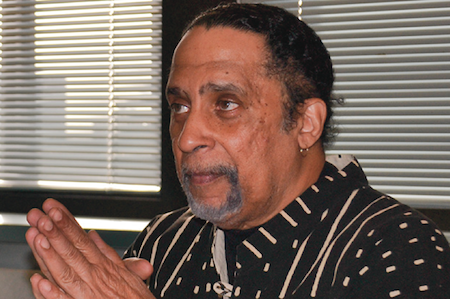 Taki S. Raton
On the evening of July 17, a crowd gathered in the former home of AM 920 WOKY to celebrate the life of writer and educator Taki S. Raton. There, more than thirty attendees listened to speeches from those whose lives were touched by Raton, who passed away on July 7. There, the group shared more smiles than tears as they listened to accounts of Raton’s invaluable influence and love for his community.
Raton’s family and friends gestured their agreement when one speaker called Raton “unapologetically Black.”
Numerous guests came up to take the microphone to offer their experiences with Raton. It was clear the Springfield College professor had been a force of pride in Milwaukee’s African-American community. Speakers recounted moments of realization, acceptance, and learning brought on by lessons from Raton in school or during casual conversation.
A former Springfield College student who went by Kelly recalled a course she took under the instruction of Raton.
“He was such a beautiful person,” she said.
Raton passed on a passion for African history and culture to Kelly. She said she’s kept every paper she received during his course. The lessons she learned under his instruction are lessons her children now hear.
Attendees took part in a libation ceremony, during which the presider poured water over a lively, green plant in Raton’s memory. The leader of the ceremony recalled the strongly held beliefs that Raton urged his community members to hold as dear as he did.
“He believed in the unity of African people,” he said, then poured water over the plant. He asked the others to join him, by responding “ashay”, or “so be it” in the ancient Kemetic language.
Some of Raton’s brothers in the Alpha Phi Omega fraternity sang in his honor. Raton’s unquenchable interest in and passion for the history of African peoples was clear in his work. He established Blyden Delany Academy, an African-centered school, where Black teachers taught Black students, all lead by a Black school board. He even created an exhibit on African history at Milwaukee’s Universal Academy.
According to Universal Companies CEO Rahim Islam, that exhibit is there to stay.
“I fell in love with the brother,” said Islam right before announcing his promise to keep the exhibit on display at his school.
Both Raton and Islam contribute a column to the Milwaukee Courier newspaper. Raton wrote “Young, Gifted, and Black”, a series in which readers learned about one exceptional young Black man or woman’s story. In Young, Gifted and Black, Raton has referenced Islam’s column, “Universally Speaking”. To Islam, that was an incredible honor.
A number of elected officials attended. Milwaukee Alderman Russell Stamper remembered riding a bus to Washington D.C. alongside Raton in the 1980’s. Stamper admired Raton’s belief that Black men are integral to their children’s success.
He recalled a quotation by Frederick Douglass: “’I’m glad God made me a man.’ Taki would say ‘I’m glad God made me a Black man.’”
Speeches closed with an impromptu performance by spoken word artist Muhibb Dyer. With resounding support from the audience, the moving presentation in Raton’s honor made the gathering of thirty sound like a crowd of a hundred.
Throughout the service, guests brought cash donations to the stage for Raton’s family.
Funeral services and visitation for Taki S. Raton took place on Wednesday, July 21 at Reid’s New Golden Gate Funeral Home.