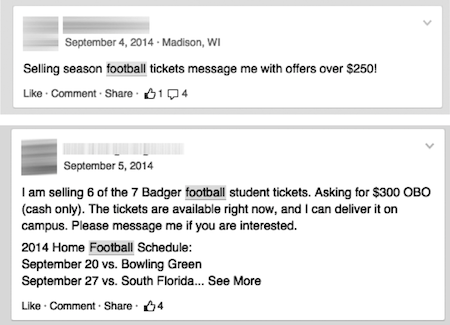 Many students question the legality of these sales, arguing that what these students are doing is illegal, not to mention immoral.
Wisconsin State Statute as well as the University of Wisconsin System rules both state that it is illegal to sell tickets for more than the printed ticket price.
That makes it a pretty open-and-shut case for those who scalp general admission, non-student tickets as they have a price printed on them.
Student tickets, however, do not have a price printed on the ticket, which can lead some to think there’s a gray area of legality for secondhand sales.
But that’s not the case. “The bottom line is that the scalping of tickets is illegal,” said UW Police Dept. Public Information Officer Marc Lovicott.
This applies to both student and non-student tickets, he continued, adding that those who sell tickets can be cited not only for scalping but also for selling or peddling without a permit.
Lovicott also noted that while there is no price explicitly labeled on student tickets, the department uses the $42 “face value” of football tickets found by dividing what students pay the university for their tickets by the number of games as the standard to determine if the tickets are being scalped for profit.
That said, campus police aren’t out to get students.
“We’re more concerned with the ticket brokers — the guys who are out there trying to make a living selling these tickets,” he said. “We’re less concerned about a student who sells their ticket because they cannot go to a game.”
UW Police issued only three citations last year for scalping and five the year before.
Aside from the fine from police, students who get caught selling their tickets face “revocation of their tickets as well as the revocation of their privilege to purchase season tickets from the university,” said Director of Athletic Communications Brian Lucas.
The resale of these tickets has been met with both acceptance and resistance by UW students.
Many students feel that those who resell tickets are ripping off the buyers.
“I understand why students don't like it, but at the same time the buyers create the market,” said the student who asked to remain anonymous. “I wouldn't be able to sell Western Illinois [tickets] for $80 [each], if people didn't freak out about not getting season football tickets and then spend whatever on the secondary market to get in.”
Another student, Brad, who asked that his last name not be used, thinks that scalping in general can be beneficial to the sport. “Scalping in general can be a great thing,” he said. “I've brought 20-plus friends to football and basketball games. [It’s a] great way to spread the love of the game. And [it] allows people who couldn't or didn't buy season tickets to go.”