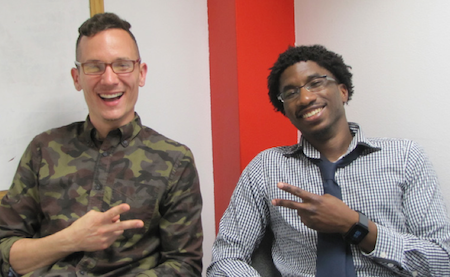 Brent Gerlach (left) and Greg St. Fort (right) Photo: Brianna Rae
Last week, Greg St. Fort was named executive director of 100state, a gathering place where young entrepreneurs share their new startup businesses ideas and work together to help each other succeed.
Taking the place of Andrew Conley, St. Fort said he’s excited about the new leadership role.
“It’s very humbling,” said St. Fort, who joined the organization a year ago.
A native of New York, St. Fort moved to Madison last August and first learned about 100state after randomly introducing himself to Conley in a park.
Originally called Caboose Coworking, 100state started as a collective of people sharing a modest space on West Washington Avenue.
In June 2013, they moved to 100 State Street and changed their name to 100state.
Since then, they have become a diverse and growing non-profit collective of nearly 200 entrepreneurs, freelancers and problem solvers who use their membership to collaborate, pool their resources, share skill sets and inspire each other for the benefit of the community.
Keeping 100state in mind during a brief stay back in New York, St. Fort immediately became a member after moving back to Madison last November.
With his skills in events production, marketing and web design, he joined the collective and quickly became events manager.
St. Fort and Brent Gerlach, director of an off-shoot of 100state called 100arts, which does similar work as 100state but for artists, are passionate about what they do and have several projects and ideas already in the works.
“We’re maintaining everything [the previous leadership] has done, building on top of it, and carrying forward the momentum,” said St. Fort.
“Reciprocity is the driving force in helping 100state become what it is,” said Gerlach, speaking about their current focus of developing member-led community workshops.
With this, they hope to contribute to the development of economic growth for the Madison community by providing their own educational system using the knowledge and skills of their members.
“It’s a way for us to give back to the community. We want to create things that create opportunities for everybody else. Being a minority and being African-American, I’m always pushing for that, especially because we need entrepreneurs,” said St. Fort, adding that “the root of our problems often comes down to economics.”
Creating community workshops where members educate each other is just one project among many. They recently redesigned their space to create an environment that reflects and inspires the creativity, innovation and energy of the members. They hope the new space is more welcoming and cultivates a desire to work, share and build together.
They also want to do more youth outreach.
“We’re working to connect and inspire youth to do the things we’re doing,” said Gerlach. “There are a lot of young, creative, inspiring individuals [out there and] we want to connect them to resources that will help further what they want to do, whether it’s using the space or learning from various mentors that we have here.”
Going forward, St. Fort and Gerlach see many opportunities and much potential for 100state and they’re striving to make it more accessible, diverse and influential.
“We’re making sure to keep [100state] very dynamic in terms of intellect, but also very diverse in terms of people’s backgrounds. The more dynamic we can make the space, the more innovative it will be,” said Gerlach. “The more we can cultivate our community here, the more we can wield resources in a meaningful way to address any number of issues.”
Agreeing, St. Fort added: “We want to be very hands-on with our members and be involved in helping the community. We want people to come to 100state and say, ‘After 100state things were never the same.’”
Though they’ve already enjoyed substantial success as an organization, they’re always thinking ahead.
“It’s still a baby — it’s only been two years,” said St. Fort. “If anyone can say we did a lot in two years, then imagine what can happen in the next ten years.”