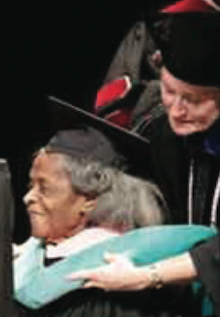 Civil rights pioneer Esther McCready receives an honorary degree from the University of Maryland. (Photo courtesy of the University of Maryland)
Stacy M. Brown is Special to the NNPA from The Washington Informer.
Small in stature and soft in voice, Esther McCready proved to be a giant in the fight for civil rights.
And, on Friday, May 15, the 84-year-old pioneer’s life came full circle as she received an honorary doctor of public service degree from the University of Maryland Baltimore, the same institution that in 1949 denied her entry into the School of Nursing because she was black.
“There is a famous piece by African-American writer Langston Hughes that asked the question of what happens to a dream deferred,” said Dr. Jane Kirschling, the dean of the University of Maryland’s School of Nursing.
“To Esther McCready, the answer is that it isn’t [deferred]. She applied to the school in hopes of earning her diploma in nursing, and her application was denied,” Kirschling said before introducing McCready to a large gathering at the school’s commencement.
“Never one to back down from a challenge, she agreed to let the NAACP argue her case in the Maryland courts,” Kirschling said.
“Two years later, her attorney, Thurgood Marshall, was successful in the fight to get her enrolled as the first African-American student admitted to the University of Maryland’s School of Nursing.”
McCready took the stage to thunderous applause. She offered a bright smile, suggesting that she was ever grateful and proud of the honor bestowed by school officials.
McCready, 84, who still lives in Baltimore, became the first African-American student to graduate from the program in 1953.
“I was really elated when the dean called me and told me that the board of trustees was going to give me this award,” said McCready, who has since been hospitalized at Johns Hopkins Hospital.
“It was a true surprise, and when I told the doctors here that I went to the commencement, they asked whether a family member had graduated. And, when I told them about my honor, they were so happy for me, and word traveled fast around the hospital. And the nurses here started calling me DR. McCready.”
McCready recalled her initial experience at the school, where she had no friends and would eat alone during lunch. “But I was used to being alone as a child,” she said.
She also clearly remembers the difficult time she experienced as the first black student at the School of Nursing. McCready said she still keeps in touch with two other women who attended the school when she did.
“One of them lives in Pennsylvania and the other in Maryland, and one of them was telling me recently that she used to speak to me. And I told her that she didn’t because she didn’t want to be ostracized,” McCready said. “I told her not to worry because I didn’t fault her because I felt it was my mission that God sent me on.”
“The first day there,” McCready said, “I remember standing at an elevator going back to orientation, and a nurse came up to me and told me that if I didn’t pray to God that I’d never get out of here,” she said. “But I told her that if I do pray to God, nobody here can stop me.”
At the graduation, which was held at Royal Farms Arena, McCready eagerly took in the sights and sounds where roughly 2,000 members of University of Maryland’s Class of 2015, graduating from its schools of dentistry, law, medicine, nursing, pharmacy, social work and its graduate school, began their journey to the future.
“As I sat there at the graduation and I looked at the African-American faculty, I thought about when I went there that the only jobs for blacks were nursing aides, dietary aides and housekeeping,” McCready said. “Now the deans of the school of medicine and law are African-American. None of that was there in 1950, so to sit there was amazing.”
Kirschling said the School of Nursing now has 37 percent minority representation, 53 percent of which is African-American. She said students have gained a great deal because of the strength, perseverance and determination of McCready.
“Not only were Esther’s dreams not deferred, but thanks to her courage and bravery, the dreams of so many others did not have to be either,” Kirschling said before turning to McCready. “Esther, we honor you as a civil rights icon, a transformational figure in education. You are a treasure.”
Stacy M. Brown is Special to the NNPA from The Washington Informer.