Anyone at any age who has had oral, anal, or vaginal sex without a condom, even once, can get HIV infection.
In fact, every nine-and-a-half minutes in the U.S. alone, someone’s mom, dad, daughter, son, aunt, uncle, grandfather, grandmother, niece, nephew, friend, or partner becomes infected with HIV, the virus that causes AIDS.
Experts say 20 percent of Americans infected with HIV do not know they are infected, and as a result, may unknowingly transmit the virus to others — through sexual activity, sharing needles or syringes, pregnancy, birth, and breast feeding.  And researchers now know that it’s folks who don’t know they are infected that unintentionally transmit most cases of new infections.
As an agency, AIDS Network has provided services to kids as young as 2, 3, and 4 years old. Right now, the youngest client the soon-to-be 30 years old organization serves is 6 years old, and the oldest is in their 80s.
A question folks sometimes ask Heidi Olson-Streed is, “Does HIV pass through mosquitoes?” Olson-Streed, who works in Harm Reduction Education at AIDS Network, said, mosquitoes don’t work that way.
While most people have a pretty good idea of how HIV passes, sometimes they don’t have an accurate assessment of their own risk of HIV/AIDS. “I feel like the communities that have the highest rates of new infections don’t realize the extent of the problem in their community,” she said. Namely, men who have sex with men (of all races) and young men of color (under the age of 30) who have sex with men.
She spoke about how men of color are treated in our society in general, pointing out the disparities in rates of incarceration and rates of arrest, higher rates of not having your high school diploma, etc. “If you look at society as a whole, the laser beam focus of our legal system, our education system is very race-based because the outcomes are so lopsided,” said Olson-Streed. These circumstances can make it harder for people to see themself as worthy of good health, she explained, and it can be much more difficult to take care of oneself.
The rate of new infections is also up among older adults, too, mostly due to a lack of experience with dating, Olson-Streed reports.  Often, folks who’ve been together for 30 or 40 years divorce/split up or their partner dies, and today’s “magic blue pills” may give more options for continued sexual involvement in later years.
“I was in high school when HIV first made the news,” stated Olson-Streed, who has been working with AIDS Network for 15 years. “(But) if you missed that, I don’t know if it’s quite so burned into your mind, that there is something to talk to your partner about (protecting against sexually transmitted diseases).
She described how some things have changed over the years when it comes to HIV/AIDS. “We’re now dealing with aging issues in a field where it used to be (when you learned you were HIV-Positive), ‘you’ve got 10 to 15 years (to live),” she said. “Now, we’re dealing with how to make your house safe as you get older. Let’s put some handles in those bathtubs.’ “
Olson-Streed says there is no endpoint for living with HIV and being treated, stressing that there are individuals who’ve been living with HIV and receiving treatment for a period of more than 20 years.

Early detection is important
The good news is many new drugs and treatments are available so people with HIV can have longer, healthier lives; however, early treatment is critical to help prevent the disease from attacking and destroying the immune system to the point that a person’s body is not able to fight off the infection.  (Source: http://www.aidsnetwork.org/aid-hiv-hcv-info/)
Walk-in, no-cost testing is available at AIDS Network in Madison, Monday through Friday, 10:00 a.m. until 4:30 p.m. (6:00 p.m. on Wednesdays); also available in .  HIV testing is also available through Planned Parenthood, the Health Department, and your doctor’s office.
For a person who is newly diagnosed HIV-positive, their first step, Olson-Streed said, would ideally be linking up with a partner in case management or health care to help them navigate the system. “It’s paramount to find out how much virus is in you, and what drugs might work on that virus,” she stated.
It used to be back in the early 1990s, you could count the medication options on less than two full hands. Now, she observes, the antiretroviral therapy drugs to treat HIV/AIDS would fill an 8 ½ x 11-inch sheet with at least two columns.
The purpose of testing, hopefully on an annual basis depending on risk factors, is to catch an infection early. “The earlier you can catch an infection, the more successful treatment’s going to be,” stressed Olson-Streed, “and the more successful treatment is, the less virus is in that individual person.”
A key question to ask yourself in deciding how often to be tested is, ‘Did I share anything that pokes through the skin?’ If you have not had any unprotected sex in the last year and you didn’t inject anything (using unclean or shared needles) during the past 12 months, you probably don’t need another HIV test this year,” she said.
If a person tests positive, AIDS Network works to help him/her feel as comfortable as they can be. The Network offers hope, information, and resources to help access that treatment, all of which are provided at no cost to the individual. Services include legal assistance, life care help, support groups, and a dental clinic.
If an individual has mental health issues, addiction, and/or housing problems, these can interfere with getting treatment for the infection. “That’s what AIDS Network is all about, to make it easier to get treatment, to help with myriad problems that can affect their success,” she attests.

Bars to neighborhood centers….
For more than two decades, AIDS Network has had a needle exchange program to work with active drug users to help reduce their risk. It’s available to people living in all 13 counties the nonprofit currently serves in Southern Wisconsin.
Much of the community outreach and testing takes place in community centers and bars in and around Madison.  Olson-Streed also travels to correctional facilities in Wisconsin to educate folks on the exit track, and also does some testing and education at drug treatment centers.

Test with the best (friends and family)…
The latest when it comes to HIV awareness is social networks testing, a matter of spreading the word, not the infection.  The initiative started as a CDC (Centers for Disease Prevention and Control) pilot program in Baltimore and Washington D.C., and has expanded to other states.
“If you are a person who is engaging in a lot of risky activity, talk to the people you are with,” she implored. Maybe together, you can go in to be tested.
Olson-Streed recognizes that it might not be easy to talk with others about sexually risky activities and drug use risk. If your friends, family, and community don’t necessarily know about these behaviors, or if they “have a lot of stink- face towards them,” it can be difficult to broach the subject.
“Testing and treatment are part of prevention,” Olson-Streed emphasized, and to date, there is no cure for HIV/AIDS. “The more people in a community that know their (HIV) status, the healthier that community is going to be.” 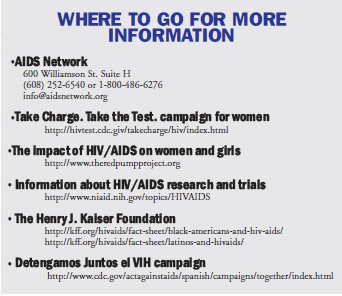