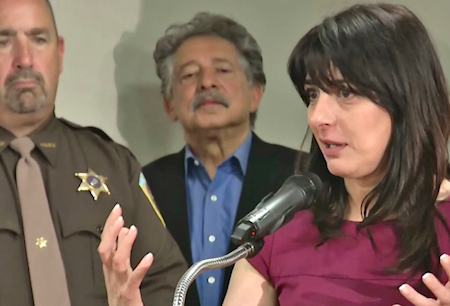 From left: Dane County Sheriff Dave Mahoney, Madison Mayor Paul Soglin and Madison Metropolitan School District Jennifer Cheatham
Mayor Paul Soglin, Madison Metropolitan School Superintendent Jennifer Cheatham and Police Chief Mike Koval were among the top city officials present at a recent June 4 press conference detailing the city’s local branch of the “My Brother’s Keeper” (MBK) initiative.
MBK is a presidential call for action aimed at reducing educational disparities and ensuring all youth can achieve their fullest potential. President Obama unveiled the initiative in February of 2014.
Since late September, more than 200 leaders and 2,000 community-based allies have created plans to achieve the 6 major milestones laid out by MBK. The milestones include: getting a healthy start and entering school ready to learn; reading at grade level by third grade; graduating from high school ready for college and career; completing postsecondary education or training; successfully entering the workforce; and keeping kids on track while giving them a second chance.
Mayor Paul Soglin and a number of community partners, including 100 Black Men of Madison and the African American Council of Churches, Inc. originally committed to the initiative back in September of 2014. Recent racial unrest, including the shooting death of Tony Robinson, and the October 2014 release of the Race to Equity Report, brought the program back into the spotlight.
Madison’s localized MBK program was determined by a survey of 200 young men of color in the community. The survey was used to collect information on which MBK goals these men thought were most relevant to the area. Respondents pinpointed youth graduation from high school, youth safety from violent crime and access to second chances as top priorities. Local efforts to fulfill these goals include plans to build full-service community schools, expand mentoring and employment programs and improve Madison’s restorative justice courts.
Goal One: High School Graduation
The full-service community school will be the primary tool used by city officials to help young students of color succeed academically. Madison Metropolitan School Superintendent Jennifer Cheatham stressed “excellence with equity” at the June 4 press conference. The school would offer services and programs, including health care access, tutoring and food, to students of all ages during traditional school hours as well as after hours and on weekends. After planning concludes, the program will be piloted with one or two schools in the Madison Metropolitan School District during the 2016-2017 school year. A $300,000 grant from the Madison Community Foundation is currently funding the school’s development and will allow for the creation of four full-service schools in the Madison area by the end of 2018.

City leaders at a press conference regarding the local “My Brother’s Keeper” initiative
City officials are also looking to advance the goal of graduation through partnerships with local community organizations. These organizations will actively contribute resources to MBK initiatives in Madison. The Urban League of Greater Madison is one such group. Their Schools of Hope Program partners with United Way and a student’s school district to offer tutoring in math, English and reading. Their 21st Century Careers program helps students explore career paths and find summer jobs shadowing with agencies and local leaders.
“We support ‘My Brother’s Keeper’. African Americans face a lot of disparities, particularly African American boys,” said Dr. Ruben Anthony, President of the Urban League of Greater Madison.
Wisconsin’s Equity and Inclusion Laboratory (Wei LAB) is the University of Wisconsin-Madison’s primary partner organization, which conducts research used to inform lawmakers of the best ways to offer equitable learning and employment opportunities.
Goal Two: Restorative Justice and Second Chances
Madison Metropolitan School District will also play an active role in the second, restorative justice branch of Madison’s MBK initiative. Cheatham spoke at the press conference on the district’s efforts to reduce exclusionary practices like expulsion and suspension, which oftentimes impact students of color more than their counterparts. Instead, city schools will encourage progressive discipline, the restoration of relationships and second chances.
“There should be a city and community-wide effort to help our young people learn together and for us to create an environment that doesn’t produce negative behavior that could lead to citation and arrest,” Cheatham said. She’s hopeful new and improved restorative justice programs will do just that.
Municipal Court Judge Daniel Koval addressed a number of these programs on June 4, including Madison’s Habitual Truancy Courts. The courts serve all four of Madison’s public high schools and one alternative high school. With help from UW-Madison and the community, the courts bring resources to students, including mental health, family and drug and alcohol counseling. Students meet every month for a year with program officials, addressing issues in their lives that sit at the root of their unique circumstances. Funding for the program comes from city, county and state resources and grants.
In an interview, Koval also discussed a new restorative justice initiative, which would work to give much younger students a second chance. The program would address children ages 12-16 that have committed retail theft, trespassing and other municipal violations. If the student participates in and successfully completes the restorative justice program, the case is not filed and the student is given a second chance.
The press conference pointed to such existing programs and the work of the Madison branch of “My Brother’s Keeper” as alternatives to traditional police force. “[We’re] oftentimes focused on police as the core agency that deals with youth in trouble and these efforts by the judiciary and districts are absolutely critical if we’re going to change the direction of the community,” Mayor Paul Soglin said at the meeting.
Also in attendance at the press conference were Dr. Jerlando F.L. Jackson, Director of Wei LAB, and Rev. Mitchell of 100 Black Men of Madison. Mitchell spoke on the importance of successful older men in the lives of their younger counterparts, saying, “They’ll be what they see.”
“This is more than just a pledge… we’re building systems that are going to change the lives of not just young men but their families, siblings, children and our entire community,” Mayor Soglin said.
As plans move forward, the city will establish a timetable of action for Madison’s “My Brother’s Keeper” initiatives and begin implementation.