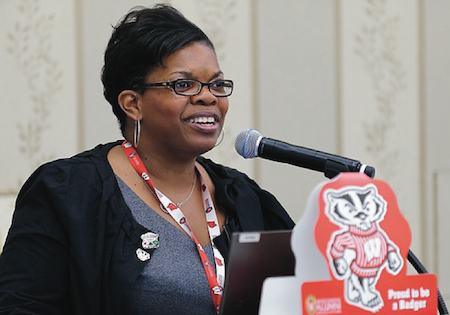 Adele Brumfield speaks to prospective students and their parents during an event sponsored by the Office of Undergraduate Admissions in Santa Monica, CA. Photo credit: UW-Madison, University Communications.
“I was a kid who was bussed and had no money to go to college, and now I’m out here representing the United States. That’s why I stay in this work, because education is powerful, but you have to believe it,” she said.
This week Adele C. Brumfield celebrated her 5th year anniversary as Director of Undergraduate Admissions and Recruitment at UW-Madison.
Reflecting on her tenure at UW so far, Brumfield said, “Being a daughter of the state and having always known about UW-Madison and the impact that this university has across the world, being in the position to lead the admissions office – it’s a wonderful, wonderful thing. It’s powerful.”
Passionate about her position today, Brumfield wasn’t always on the path to become involved in university admissions.
Born and raised in Milwaukee, WI, she attended Shorewood High School and began her undergraduate career at Marquette University as a first-generation college student. Originally, Brumfield said, “My intention was to be in the news and in the media,” and she worked for the school newspaper and TV station while obtaining her degree in Broadcast Communication.
She found her first job experience in admissions at Marquette through a job lead from the school’s Educational Opportunity Program, a program that helped first-generation and low-income students. There, she worked on multicultural recruitment and publications, but stayed only for a year. “It wasn’t my career path, it wasn’t my destiny… At least I thought it wasn’t,” she recalled.
Still determined to pursue a career in media and communication and following a brief stint in Maryland, Brumfield moved to Michigan to begin her graduate career in Telecommunication Studies at Michigan State University.
After she graduated, jobs in communication – particularly jobs that paid a living wage –were scarce. Feeling that she needed to redirect her focus in order to be gainfully employed, she remembered her previous position in admissions.
“I thought, ‘I think I’ll give that a go.’ There were things that I really liked about it – an opportunity to travel, to work with students, and to use my communication skills,” said Brumfield.
She was hired in admissions at Denison University and later at University of Chicago, where she focused on undergraduate multicultural and student of color recruitment. Initially during her years at Denison and University of Chicago, she still saw admissions as a stepping-stone to something else, but all the while continued to build skills in new areas and take on new responsibilities.
At Denison, Brumfield became Publications Liaison, and at University of Chicago she began to manage operations, such as handling a multi-million dollar budget and introducing a new system of document imaging to the school.
She noticed how the transient nature of working in admissions allowed colleagues of hers who stayed in the profession to advance, particularly men, despite the field being dominated by women. “So when I saw these guys moving up, I thought, ‘wait a minute, something’s not right.’”
Brumfield had to decide whether to commit to the profession or move on to something else. “In committing, I had to figure out what other skills I needed to learn and master in order to move up into a position like what I’m doing right now,” she said. 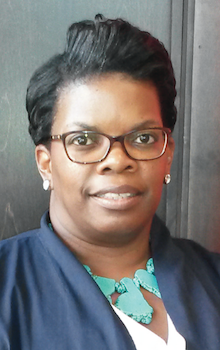