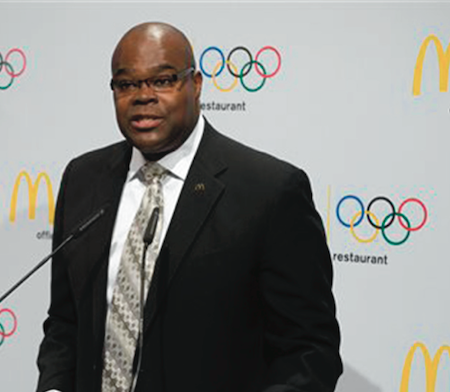 In this Jan. 13, 2012, file photo, Don Thompson, McDonald’s President and Chief Operating Officer, speaks during a news conference in Innsbruck, Austria. (Kerstin Joensson/ AP Images for McDonald’s, File)
When McDonald's CEO Don Thompson officially steps down in March, there will be just four black CEOs in the Fortune 500.
Even as politicians, pundits and the business community work to increase the number of women in the C-suite, Thompson’s departure is a reminder that the highest levels of corporate America are also severely lacking in racial diversity. Black CEOs will lead just .8 percent of America’s top companies once Thompson steps down. When Marvin Ellison takes the reins of J.C. Penney in August, that share will grow to 1 percent.
The lack of diversity at the top of corporate America extends beyond black CEOs. Fortune reported in February 2014 that just over 4 percent of Fortune 500 CEOs at that time were minorities, a classification including African-Americans, Asians, and Latin-Americans. And there were 24 women CEOs in the Fortune 500 – representing 4.8 percent of companies – as of June.
At one time there were as many as 12 black CEOs in the Fortune 500, according to Ronald C. Parker, CEO of the Executive Leadership Council, an organization representing top black executives in the Fortune 500. Why the decline in recent years? Part of it has to do with the push toward globalization, Parker told The Huffington Post: As America's top companies placed more value on leaders with international experience, they focused less on women and minorities.
"Women and people of color aren't afforded those opportunities," said Parker, who served as Pepsi's senior vice president for human resources, labor relations and global diversity and inclusion. "We're not in the conversation early enough. Organizations who do this well are very intentional about it."
There are other reasons why women and minorities are so rare at the highest echelons
of corporate America. Unconscious biases against people who don’t look like a “typical” (aka white male) leader can make it harder for top female and minority leaders to climb the corporate ladder. Though studies show that diversity is good for business, leaders are often subconsciously more comfortable working with people like themselves. In addition, some companies committed to diversity haven't quite figured out how to effectively recruit, cultivate and retain women and minority talent.
"People have a tendency to select individuals that they are familiar with and comfortable with," Parker said, noting that the vast majority of board members at America's top companies are still white men. "They are comfortable with their network of the people that they know, therefore the people that get those opportunities tend to look like them."
Once they do make it into leadership positions, women and minority CEOs tend to have rockier tenures and less freedom to lead than their white male counterparts. They are also more likely to be tapped as CEOs when a crisis is looming, a phenomenon know as the “glass cliff,” according to research by Christy Glass and Alison Cook, professors at Utah State University.
“After they’re promoted, if the firm suffers in both the short-, medium- and long-term, they’re at very high risk of being replaced by a white man CEO,” Glass said. “One of the reasons they’re given fewer degrees of freedom is because they’re under this microscope. They don’t look like our stereotypical model of the leader. We have some biases about their competence and ability.”
Thompson, an engineer by trade, doesn’t fit the “glass cliff” stereotype. He was groomed for years to become the company’s CEO. At one point he considered leaving McDonald’s, but the chain’s chief diversity officer at the time advised him to move from his job designing electronic equipment to an operational role with better opportunities for advancement, according to a 2011 profile in Crain’s Chicago Business.
He took the reins of McDonald’s in July 2012, during a period of strong revenue and profit for the fast food chain. Still, investors worried that there wasn’t any room left to continue the chain’s momentum, according to a Wall Street Journal article published at the time.
Those fears appear to have come true. Thompson’s tenure as CEO has been marked by struggles, particularly in the U.S., where diners are fleeing the Golden Arches for the freshness and variety offered at fast-casual chains like Chipotle and Five Guys. McDonald’s menu has also ballooned to more than 100 items over the past few years, causing complications in the kitchen and longer wait times.
And it’s not just the food. McDonald’s has been the main target of protests for higher wages in the fast-food industry – protests that have gained traction over the past few years.
Under Thompson, the chain has worked to address some of these issues. McDonald’s announced late last year that it would expand its “Create Your Taste” program, which allows diners to customize their burgers with fancy toppings like guacamole and creamy garlic sauce. The chain is also cutting eight items from its menu.
But it may be too little, too late for Thompson, who will step aside from the CEO position to make room for McDonald's Chief Brand Officer Steve Easterbrook, a white man. According to Cook and Glass, it's not unusual for a company to swiftly appoint a white male leader to soothe shareholders once signs of trouble emerge – they call it "the savior effect."
McDonald's declined to comment on Thompson's departure.
“White men CEOs lead failing firms all the time,” Glass said. “Women and minorities aren’t given the benefit of the doubt. When they slip up – even if it's not their fault — it's really easy to blame them because we already have these biases that they may not be as competent as other leaders.”