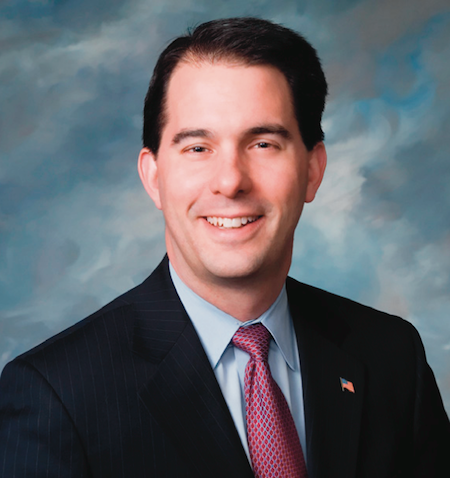 Governor Scott Walker
Wisconsin Governor Scott Walker has been busy. Between attending the Iowa Freedom Summit and appearances on Sunday morning news shows, it is apparent to all of Wisconsin that Scott Walker has presidential aspirations.
Amid his campaigning, Walker addressed lawmakers in Madison unveiling his 2015-17 budget on Tuesday, February 3. The $68 billion budget includes a plan to solve a $2 billion budget shortfall. The shortfall is based on spending requests submitted by state agencies. If spending continued at the current level, the state would be roughly $928 million short by mid-2017.
“The budget plan we present tonight will help restore the American dream here in Wisconsin,” the governor said. Over the past few weeks, Walker has disclosed a few of his proposals.
To fund Department of Transportation projects, Walker is borrowing $1.3 billion needed instead of raising taxes.
Walker is planning a reduction of 13 percent in state funds to the University of Wisconsin (UW) System. This would equate to $300 million over two years. In exchange, the UW system would be freed from some state rules and have the ability to act autonomously on personnel and tuition issues.
“Maybe it’s time for faculty and staff to start thinking about teaching more classes and doing more work. This authority frees up the UW administration to make those sorts of requests,” Walker said in an earlier radio interview with WTMJ Milwaukee.
Governor Walker called for a tuition freeze over the next two years. The cost savings is expected to come from salary reductions, firing, ending tenure, reducing health benefits and pensions, according to the Huffington Post.
Some students, faculty and Wisconsin residents believe the budget cuts would heavily weigh down students with substantial loan debt. While a tuition freeze may be in place, with possibly less class options may force students not to be able to get the classes required to graduate in four years.
Taylor Sims, sophomore sports science major at UW-LaCrosse said, “With limited resources and classes, incoming freshmen may choose to attend college out of state.”
Faith Britton, a junior Social Work major at UW-Whitewater said, “I think that Scott Walker is doing the opposite of what his initial campaign stood for which was ‘Move Wisconsin Forward.’ As a UW student, I feel the budget cuts will negatively impact myself and my peers. I think his plans should be carefully reconsidered."
Rallies have been planned at UW-Milwaukee this week protesting the budget cuts.
“As a father of a UW student, I have a real interest in the success of this system,” Walker said.
Walker never graduated from college. He left Marquette University one semester shy of graduation.
Governor Walker has received criticism from both Republican and Democratic state lawmakers on his proposal on a new arena for the Milwaukee Bucks.
In his proposal, Walker plans to issue $220 million in bonds to aid in funding a new arena for the Milwaukee Bucks. The bond will be paid back by projected growth in income taxes from the Bucks players, as well as visiting teams, due to salary increases and new TV contracts. No current base revenues would be used to pay for the bonds.
Moving forward with his campaign pledge, the governor is working to require drug testing for low income Wisconsinites applying for government assistance programs such as FoodShare, BadgerCare and Unemployment Insurance. In addition, Walker is proposing to offer free drug treatment and job training for applicants testing positive for drugs.
As yet there are no details on how the testing will be funded, but according to Walker press secretary Laurel Patrick, a cost estimate will be released in the budget proposal.
According to the Wisconsin State Journal, the proposal also revealed plans to defund Wisconsin Public Television and Wisconsin Public Radio.
The current bi-annual Wisconsin budget runs from July 2013 until June 2015.
Once the governor submits his 2015-2017 budget proposal, it then goes to the Republican controlled Wisconsin state Legislature where they will debate the proposal and eventually vote on it in June.