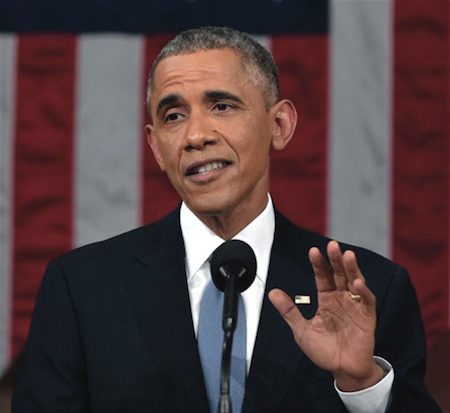 In this Jan. 20, 2015, President Barack Obama delivers his State of the Union address to a joint session of Congress on Capitol Hill in Washington. The White House said Tuesday, Jan. 27, it is dropping a proposal to scale back the tax benefits of college savings plans amid a backlash from both Republicans and Democrats. (AP Photo/Mandel Ngan, Pool)
LOS ANGELES, CALIFORNIA (ASSOCIATED PRESS) — The gap in bachelor-degree attainment between the nation’s richest and poorest students by age 24 has doubled during the last four decades, according to a report released Tuesday.
The percentage of students from the lowest-income families — those making $34,160 a year or less — earning a bachelor’s degree has inched up just 3 points since 1970, rising from 6 to 9 percent by 2013.
Meanwhile, college completion for students from the wealthiest families has risen dramatically, climbing from 44 to 77 percent.
“It’s really quite amazing how big the differences have become between those from the highest and lowest family incomes,” said Laura Perna, a University of Pennsylvania professor and executive director of the Alliance for Higher Education and Democracy, one of the two organizations that published the study examining college costs and degree attainment.
The study comes amid renewed debate on college affordability spurred by President Barack Obama’s proposal to make two years of college free. If adopted in every state, the proposal would benefit a projected 9 million students each year. It would cost taxpayers an estimated $60 billion over 10 years — a price the Republican-controlled Congress is likely to be hesitant to embrace.
Among the report’s other findings: The percentage of students from all income levels enrolling in college has increased, shrinking the gap in enrollment between rich and poor “somewhat” during the last four decades. There was a 46-point gap between the two groups in 1970, compared with a 36-point gap in 2012.
But completion gaps are growing: While 99 percent of students entering college from the highest-income families — those making $108,650 or more a year — graduate by 24, just 21 percent of students from the lowest-income families finish by that age.
Perna said there are a number of factors contributing to the widening divide, including access to the information and support needed to enter college and graduate; college readiness; and the availability of higher education that meets people’s needs, particularly for students who might have children, limited access to transportation and full-time jobs.
She also noted that the likelihood of finishing a degree varies dramatically by the type of institution. Students from the poorest families are overrepresented in public two-year institutions, which tend to have lower completion rates, while those from wealthier families are abundant in doctoral-granting institutions.
The Obama administration has expanded the availability of Pell grants and supported a tax credit for tuition costs, but the study says the amount of the maximum Pell grant award has not kept up with the rising cost of college. College costs were more than two times higher in 2012 than in 1975 at the start of the Pell grant program, which provides aid to low-in-come students based on need.
Pell grants covered 67 percent of college costs in 1975 but only 27 percent in 2012.
“We sometimes think that low-income students are taken care of because of the federal program. But you can see it covers so much less than when it was first established.”
– Margaret Cahalan, director of the Pell Institute for the Study of Opportunity in Higher Education, the second institution involved in the report.
The study shows the burden of paying for college has increasingly shifted from state and local governments to students and families. That, Perna said, should prompt an important question: Who should pay for college given the individual and societal benefits?
“Students only have so many resources they can use to pay the costs,” Perna said.
Michael Kramer, 29, is the first in his family to attend college. The son of a country club maintenance supervisor and a factory worker, he went straight to jobs in retail and plumbing after graduating high school, unable to afford college. He eventually enrolled in a community college while working full time and is now taking out loans to help finish his bachelor’s degree at the University of California, Los Angeles.
“We’re a country that says everybody should be getting higher education, and nowadays, to get any decent job, you need a bachelor’s degree,” Kramer said.
But for low-income students like him, Kramer said the high cost of college often means making a difficult choice between fulfilling basic food and housing needs and obtaining a postsecondary education.
“It’s a continuous cycle that they get stuck in,” he said.