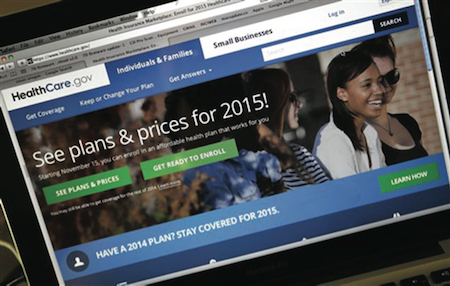 In his Nov. 12, 2014 file photo, the HealthCare.gov website, where people can buy health insurance, on a laptop screen, shown in Portland, Ore. Being uninsured in America will cost you more in 2015. In 2015, all taxpayers have to report to the Internal Revenue Service for the first time whether or not they had health insurance the previous year. Most will check a box. It’s also when the IRS starts collecting fines from some uninsured people, and deciding if others qualify for exemptions. (AP Photo/Don Ryan, File)
For the second year, Obamacare enrollment isn’t exactly over when it’s over.
The regular open enrollment season ended at midnight Sunday but the Department of Health and Human Services on Monday announced a one-week “special enrollment” period ending Feb. 22 for people trying to enroll through HealthCare.gov who encountered technical glitches or faced long waits through the call center on the final weekend. Most states have outlined similar policies.
There’s also a growing chorus urging a separate special enrollment period around the April 15 tax-filing deadline. That would be for people who do their 2014 taxes, discover they must pay a penalty for going without insurance without an exemption — and face an even bigger fine for going uncovered in 2015. HHS Secretary Sylvia Mathews Burwell told POLITICO the agency is considering giving them another chance to sign up, and several Democratic lawmakers have urged precisely that.
A wave of people being fined without having a way to avoid another year’s fines would generate another spurt of unfavorable publicity for the ACA.
The Washington Health Benefit Exchange announced Monday a special enrollment period for two months in that state. California and Minnesota are considering it.
HHS did not give an enrollment update Monday but reported throughout the final weekend that website traffic and call center volume were heavy. Even before the final deadline neared, 10 million people had selected plans or been re-enrolled on the federal or state exchanges, although not all have paid yet.
HHS hopes to have more than 9 million covered in the exchanges this year. That’s less than the Congressional Budget Office forecast.
A special enrollment period around tax time would boost the numbers further.
“Such a special enrollment period would increase coverage in affordable private health insurance and reduce the costs that the uninsured pass along to the insured,” Sen. Tammy Baldwin and 10 other senators wrote Burwell.
A paper published by the Urban Institute on Saturday notes various trade-offs to a special enrollment period. Verifying that consumers faced tax penalties could be a headache and the special period could muddle messaging strategies. The authors suggested that the administration consider changing the dates of future open enrollment periods to early in the calendar year. This revision would likely push more uninsured to enroll because the previous year’s penalty for not having coverage would be fresh in their minds, the authors write.