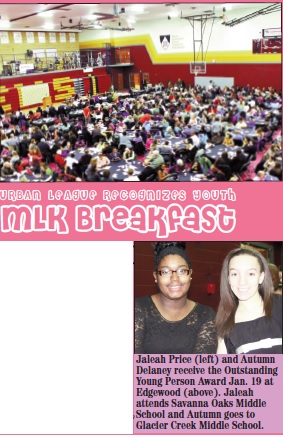 Hundreds gathered at Edgewood High School for the 30th Annual Martin Luther King, Jr. Youth Recognition Breakfast, which took place Jan. 19. The purpose of the event was to honor young people that embody the spirit of Dr. King, are excelling in school, focusing on their future, and serving others through volunteerism. The Urban League of Greater Madison hosted the gathering, with support from UW Health and Unity Health Insurance and Madison Gas & Electric. In-kind sponsors included Bagels Forever, Edgewood High School, and Pepsi/WP Beverages, LLC.
Dr. Gloria Ladson-Billings began her remarks by sharing Dr. King’s words:  “Intelligence plus character, that is the true goal of education…everyone can be great, because everyone can serve.”
“It is wonderful to see how many people care about recognizing outstanding students of color throughout Dane County,” she said. Ladson-Billings is a long-time educator and author of the book, The Dream Keepers.
Reverend Alex Gee, pastor at Fountain of Life Family Worship Center, then gave the invocation and shared some thoughts. Historically for people of color, particularly African Americans, education has been the go-to when nothing else worked, he said. Education is how we uplifted out of despair and out of discrimination, Rev. Gee stated.
Addressing the outstanding students and referring to their strength, insights, and leadership, he said, “You’re the ones we look to, to raise up a bright future.”
As folks went through the buffet line-the event was catered by Kipp’s Cuisine Catering, Ladson-Billings once again addressed the audience. “…This event is special to me because my own daughter was recognized at this event many years ago.”
She said that she was pleased to see the young people receive recognition for their achievements and volunteerism, but felt that there could easily be triple the number of students “because we have that many…highly intelligent young people in our schools.”
She also pointed out that beyond gathering for today’s celebration, “what we (adults in the room) really need to do is be their advocates on every day.”
The lack of advocates is critical, said Ladson-Billings, who proceeded to talk about what it was like not being one of the smartest kids in her school growing up. “Instead, I was one of the hardest working kids in my classes,” she attested, recalling what things were like in the Philadelphia School District at the time. 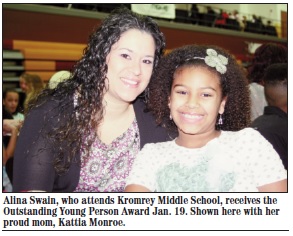 Looking out for Number Two
“My father said, ‘You have to be on the lookout for Number Two, because you, baby girl, are Number One. And Number Two is gunning for you.’”
Over the years, she stated, she had “a few teacher advocates– not many, not a lot, a few.” Mrs. Benz was one such person, who said, “’Gloria, you can do anything you want and you can do it better than anyone else. It’s your choice.’”
From her church, Ladson-Billings said, she learned about civic engagement, civil rights, and civic disobedience.  She also spoke about the elders that looked out for her when she was young, and those same senior citizens, when she went to college, sent her notes of encouragement, often along with a five-dollar or a ten-dollar bill.
She also mentioned how her (adult) neighbors both praised and chastised her when she was growing up, “because every child belonged to every adult and every adult belonged to every child.”
Ladson-Billings referred to the need “to stick our noses where people say they do not belong,” including when it comes to “the spaces of privilege that exist in our schools…No schools have the right to separate those special and unequal spaces…” She stressed, “…We have to advocate on behalf of our children.”
Addressing the young people, she advised them when they walk into a new situation, “Look out for Number Two, because you’re Number One.”
Next came the most important part of the program, the awards. More than 210  middle and high school students of color from 36 schools received Outstanding Young Person Awards for their commitment to academics, extra-curricular activities, and volunteerism. (See sidebar below)

Outstanding kids receive scholarships
Mann Scholarships were awarded to Elijiah Anderson-Fountain (LaFollette High School), Symone Booker (East High School), James Horton (Memorial High School), Simeon Parker (West High School), and Narik Riak (La Follette High School.) The Mann Scholars program honors the legacy of Bernard and Kathlyn Mann, African American parents whose five children graduated from Madison schools and went on to earn college degrees.
The 2014 Betty Franklin-Hammonds Memorial Scholarship recipients are: Jonathan Conduah (Oregon High School), Brandon Isabell (Sun Prairie High School), Jacquerah Jolly (West High School), and Claire Wisniewski (East High School).  The Betty-Franklin Hammonds Scholarship rewards the accomplishments of graduating seniors seeking to further their education beyond high school, with special attention given to those who have faced particular economic and/or social obstacles on their journey to educational advancement.
The Urban League of Greater Madison also gave a special award this year, the Distinguished Educator Award, to Mr. William Taylor, the first African American teacher in the Madison Metropolitan School District. He taught courses such as math and health from 1962 until 1993, and during the course of his career, he was a teacher at every school in the district.
Mr. Taylor graciously accepted the award with a simple expression of heartfelt thanks. His daughter said that he facilitated from eye level over the years, never talking down to the young people he taught, and instilled in them an “I can do it” attitude. She invited those at the event to repeat the empowering words aloud, and encouraged them to carry the statement with them as they go through life. 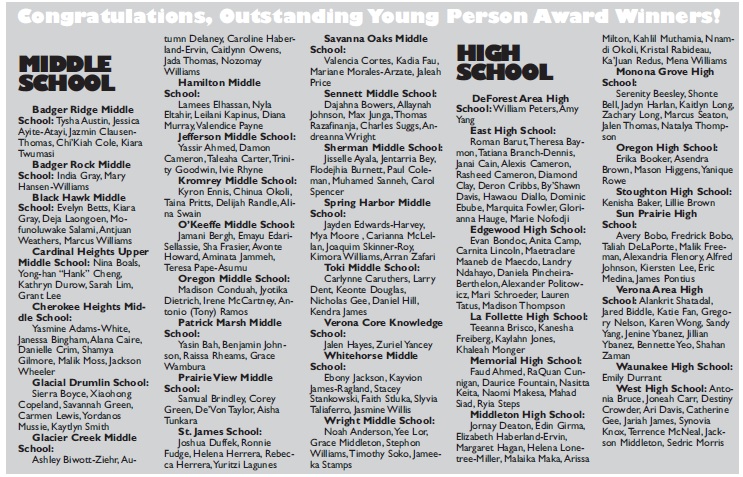