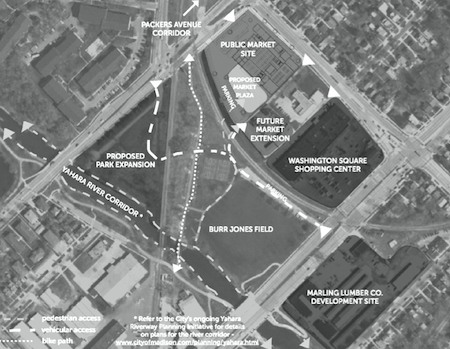 Economic development staff have been collaborating closely with Madison’s Equity Team to ensure the new market provides a platform for racial, ethnic, and cultural groups.
With the release of the first draft of its business plan, the Madison Public Market is one step closer to reaching its final stages of development.
Once completed, the estimated $9-13 million project will act as a year-round, multi-use facility for local community members, farmers, chefs, business owners and artists to sell fresh and prepared foods as well as other items at its East Washington Avenue and First Street location.
The site is favored for its high visibility to bicycle, pedestrian and vehicle traffic and close proximity to the Yahara River, Burr Jones Field and the Washington Square Shopping Center.
In addition, the location includes a City Fleet Service building on site, which could later be refurbished to meet the needs of vendors and customers and accommodate the daily tasks of the 35 tenants working there.
Consultants with the Project for Public Spaces and city officials are now working in collaboration to map out the remaining details of the market, including building finalization, operating plans, and the selection of vendors.
Daniel Kennelly, economic development specialist with the City of Madison, said public market organizers are working to find vendors.
“The major focus as we move forward is filling the market with vendors. We want to be a place that reflects and celebrates the diversity in the community,” he said.
As outlined in a draft of the market’s business plan, city economic development staff have been collaborating closely with Madison’s Equity Team to ensure the new market provides a platform for racial, ethnic, and cultural groups to interact through community and partnership.
Project organizers are also hopeful the market will allow individuals frequently denied access to the resources necessary for starting businesses of their own, including minorities, immigrants, and women—a non-traditional base for entrepreneurship.
“We’re hopeful it will be a place that provides business opportunities, especially for those who might not have the opportunity to start businesses through traditional means,” Kennelly said.
The market is expected to generate close to 265 full- and part-time jobs and to have a nearly $220 million cumulative regional economic output over a 10-year period.
It is also expected to support local agriculture, act as a catalyst for city redevelopment and improve food access. The Madison Public Market will be funded in part by city, state and federal grants and private sector donations.
The project is approximated to be completed by 2017.
As the project nears its final stages, planners are reaching out to the public for input. On June 3 at 6:30 p.m., organizers will be hosting a general meeting at the Goodman Community Center, 149 Waubesa St, Madison.
This meeting is intended for anyone interested in being a vendor or tenant at the market. You can RSVP for the meeting at the City of Madison website. Please contact Dan Kennelly with questions about the project at: dkennelly@cityofmadison.com.