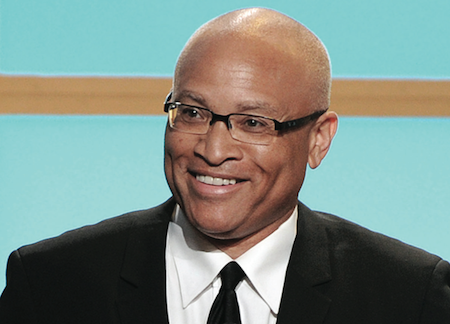 In this Monday, June 10, 2013, photo, Larry Wilmore accepts the best talk show award for “The Daily Show with Jon Stewart” at the Critics’ Choice Television Awards in the Beverly Hilton Hotel in Beverly Hills, Calif. (Photo by Frank Micelotta/ Invision/AP)
(YIBADA) — Larry Wilmore is all set to make his debut on late night TV taking over from Stephen Colbert, according to City Weekly. In view of his race, there was also speculation that the show would be renamed as “The Minority Report”. However, Fox plans to produce a TV series based on the 2002 show by the same name and will be called “Screw it, just call it The Nightly Show.” According to trade pundits, one has seen a better diversity before during the late-night time slot with the likes of George Lopez and Arsenio Hall as per Atlanta Black Star. Colbert meanwhile left to take the place of David Letterman’s time slot on CBS. Wilmore’s job is not an easy one as he will have to confront race on a regular basis on “The Nightly Show.”
However, Wilmore also believes that the black guys need not always talk about the race all the time. He may refer to the boring budget speech of Obama, and the show is not supposed to be marginalized where one talks only about the Minority Report thing or a black race. According to reports he is planning to use his position and power to talk about constructive topics and issues, rather than just focus on his race.
Describing his show, Wilmore says that it will start with him behind a desk talking on the day’s news and reading field reports from contributors. From there, he moves on to the unscripted panel discussion with rapper Talib Kweli and New Jersey Senator Cory Booker, who are the first two panelists.