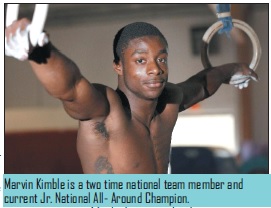 In his heart, Marvin wants to be the best.
D’Amato writes that his vision is to lead Team USA into Rio in 2016 and become the second American to win all-around Olympic gold in men’s gymnastics.
“I feel blessed that I have the qualities to be as good as Paul Hamm and hopefully one day I will win the Olympics.
That’s my goal.”