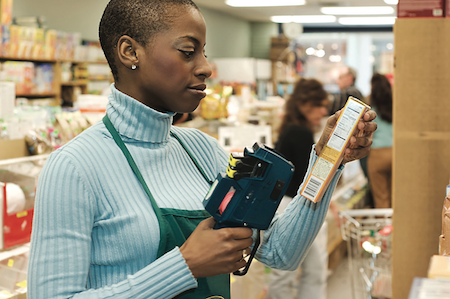 Nearly 60 percent of Black women worked in either the service industry, sales or office jobs. (Stock Photo)
WASHINGTON, D.C. (NNPA) — Black women working full time earned just 64 cents for every dollar White men made in 2013, according to a new report by the Center for American Progress (CAP).
Researchers with CAP, a nonpartisan education and policy group, released the issue brief that reported that even though the types of jobs and the number of hours that women worked can affect the wage gap, “structural and economic realities that limit women’s abilities to compete with men in the labor force” also contribute to the pay disparities. It noted that Black women working several part-time jobs to make ends meet may be falling further behind.
Although White women working full time also earned less than White men (78 cents for every dollar), women of color often earned because they were stuck in low-paying jobs, worked fewer hours and had greater responsibilities as the primary caregiver in their households.
More than half of all Black children grow up in single-parent homes with their mothers. Black men raise children alone in 9 percent of single-parent households.
Black women are also less likely to graduate from high school or attend college than White women.
“This places African American and Hispanic women at a disadvantage from the moment they enter the workforce, creating major structural barriers to entering top-earning professional fields,” stated the report.
Nearly 60 percent of Black women worked in either the service industry, sales or office jobs. “Jobs in industries such as food service—where women of color are concentrated—are often hourly jobs in which many workers are part time and schedules are subject to cancellation or alteration on short notice,” stated the CAP report.
A recent report on the effects of irregular work schedules by the Economic Policy Institute (EPI), a Washington, D.C.-based think tank focused on low- and middle-income workers, noted that employers in the retail and wholesale trade and services industries, such as hospitality and leisure, professional and business services are more likely to hire part-time workers and adjust their schedules without warning to meet immediate customer demands.
“Moreover, because precarious employment is concentrated among relatively lower-income earners, it not only exacerbates growing income inequality stifling potential economic expansion and underutilizing potential available labor input, but takes a toll on the wellbeing of working families,” the report explained.
Workers who made less than $22,500 annually were more likely to work irregular schedules than workers who earned more.
The EPI report said that, “For workers with significant caregiving or financial commitments, having weeks with as few as zero hours and days when there may be either no work or short notice to arrive at work, may make balancing work with life stressful, intolerable, or even impossible, forcing them to choose between participating in the paid labor force, unemployment, or withdrawal from the labor force.”
Just 35 percent of Black women were employed in higher-paying management, professional and related jobs compared to 48 percent of Asian women and 43 percent of White women, according to the CAP report.
EPI researchers also reported that 43 percent of workers may have less than a week’s advanced notice of their hours. Another 8 percent indicated that they knew their work schedules one to two weeks in advance had and 6 percent had two to four weeks.
“Employees who work irregular shift times, in contrast with those with more standard, regular shift times, experience greater work-family conflict, and sometimes experience greater work stress, stated the report and that work-family conflict is in turn associated with lower job and life satisfaction,” the EPI study said.
The CAP report on the race and gender wage gap said that expanding policies like paid family, medical leave and paid sick days, and strengthening equal pay laws would help women of color remain in the labor market and protect them from racial and gender discrimination.
Milia Fisher, a research associate with the Women’s Initiative at CAP and the author of the report, wrote that public policy alone will not close the gender wage gap for women of color.
Fisher concluded: “The United States needs to address both the structural drivers behind the pay gap and the persistent cultural biases against women and people of color if it wants to truly affect change for these populations.”
Freddie Allen is the Washington Correspondent for the National Newspaper Publishers Association (NNPA). A graduate of Howard University, Allen was a staff writer, photo editor and general manager of the District Chronicles. He also served as editor-in-chief of Ledge, a magazine devoted to healthy lifestyles and HIV/AIDS awareness among young people of color.