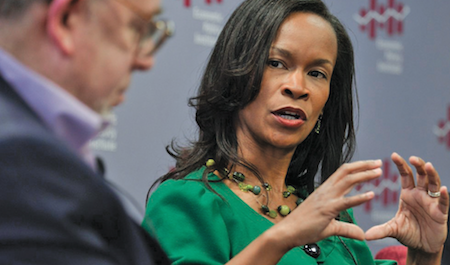 Valerie Wilson, the director of the Program on Race, Ethnicity, and the Economy at the Economic Policy Institute (EPI) speaks jobs and the economy in the Black community during an event at the EPI. (Freddie Allen/NNPA News Wire)
WASHINGTON, D.C. (NNPA) – The Black unemployment rate fell to single digits (9.6 percent) in April, for the first time since President Barack Obama was elected in 2008.
Despite the improvement, the Black jobless rate is still double the unemployment rate of White workers, which has remained flat since February at 4.7 percent.
Valerie Wilson, the director of the Program on Race, Ethnicity and the Economy at the Economic Policy Institute, a progressive think tank focused on low- and middle-income families, said that the gradual decline in the Black unemployment rate is the result of strong job growth over the past year.
As the economic recovery in the United States continued its slow, uneven climb in April there were still clear disparities, even among adult Black workers.
Wilson said that, since December, Black men have enjoyed most of the larger employment gains compared to Black women.
The unemployment rate for Black men over 20 years old was 11 percent in December 2014 and 9.2 percent in April 2015, while the unemployment rate for Black women increased 0.6 percent over the same period.
Since last April, the labor force participation rate, which is the share of the population that is either employed or looking for work, increased from 66.5 percent to 68.7 percent in April 2015 among Black men. The labor force rate for Black women only increased 0.7 percent since April 2014.
Wilson said that a renewed focus on targeted jobs programs and infrastructure investments would enable the economy to get closer to full employment, but cuts to public sector employment, especially at the state and local levels, may prolong the sluggish recovery.
According to the Center on Budget and Policy Priorities, a nonpartisan research and policy group that designs policies aimed at reducing poverty and inequality, the economy has shed nearly 570,000 government jobs, more than 360,000 jobs in local government alone, since February 2010.
“The other part of that is that wage growth isn’t anything to cheer about,” said Wilson, adding that wage growth is still below any indication that the economy has really heated up.
According to the Labor Department, average hourly earnings have only increased 2.2 percent since April 2014.
During recoveries in the past, falling unemployment rates meant that companies were forced to raise wages to compete for available workers. This recovery is different, Wilson said, in part because there’s still a decent amount of slack in the labor market.
In a state-by-state analysis of the unemployment rates, Wilson found that the African American unemployment rate was “lowest in Virginia (7.4 percent) and highest in the District of Columbia (15.8 percent) in the first quarter of 2015, surpassing Michigan, which had the highest black unemployment rate in the fourth quarter of 2014.”
Wilson also noted that, “although 7.4 percent is the lowest Black unemployment rate in the country, it is still over 1 percentage point above the highest White unemployment rate (Tennessee). Virginia was one of only eight states where the African American unemployment rate was below 10 percent in the first quarter of 2015.”
Wilson’s research also revealed that the Black unemployment rate, “is at or below its pre-recession level in six states: Connecticut, Michigan, Mississippi, Missouri, Ohio, and Tennessee. But this numerical recovery must be put in proper context because each of these states also had Black unemployment rates that were among the highest in the nation before the recession.”
The national unemployment rate was 5.4 percent in April down from 5.5 percent in March and the economy added 223,000 jobs in April for a three-month average of 191,000 jobs per month.
In a recent blog post for EPI, Josh Bivens, the research and policy director at EPI, wrote that returning the labor market to pre-Great Recession levels is too unambitious a goal.
“After all, 2007 could hardly be described as a year with the kind of high-pressure labor market that would boost wages across the board,” said Bivens.
Bivens continued: “Instead, we need to target the kind of high-pressure labor market that we haven’t seen since the late 1990s. Anything less than this will leave the majority of American workers frozen out of sharing in economic growth through wage gains.”
Freddie Allen is the Washington Correspondent for the National Newspaper Publishers Association (NNPA). A graduate of Howard University, Allen was a staff writer, photo editor and general manager of the District Chronicles. He also served as editor-in-chief of Ledge, a magazine devoted to healthy lifestyles and HIV/AIDS awareness among young people of color.