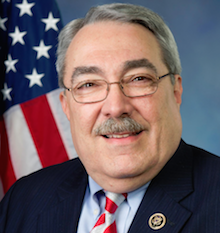 Congressional Black Caucus Chair G.K. Butterfield said Republicans must help Democrats fight poverty in African-American communities. (Courtesy Photo)
Stacy M. Brown is Special to the NNPA from the Washington Informer.
Black America is in a state of emergency, and what’s happened in Baltimore, Ferguson, Missouri, and other places isn’t solely about police misconduct, according to members of the Congressional Black Caucus.
The demonstrations and civil unrest are mostly about poverty, unemployment, a lack of opportunity, hopelessness and despair, the organization said. CBC Chair G.K. Butterfield said Democratic proposals to fix these problems stand in stark contrast to the Republican budget, which he considers a recipe for national decline.
Federal government statistics revealed that the median income of African-American households stands at $34,600, or nearly $24,000 less than the median income of white households.
Also, the median net worth of white households is 13 times the level for black households, and blacks are almost three times more likely to live in poverty than white Americans.
Further, at 10.1 percent, the current unemployment rate for black Americans is double the rate for white Americans, and blacks currently face an unemployment rate higher than the national unemployment rate during the peak of the recession.
“In my home state of North Carolina, the unemployment rate for African-Americans is 9.9 percent while the unemployment rate of whites is 3.2 percent,” Butterfield said.
Also, the poverty rate for African-Americans currently stands at 27.5 percent, while its just 12.6 percent for whites.
For District residents, the median household income for African-Americans is $38,300, while it stands at a whopping $115,900 for whites.
“Yes, that’s right; that is a gap of $77,600, and the poverty rate here in the nation’s capital is 27.4 percent for African-Americans compared to 7.6 percent for whites,” Butterfield said.
And while, on the surface, there’s a smaller gender pay gaps within the black community, it’s really not all that rosy, based on an analysis this month by The Philadelphia Tribune.
“The problem is that a smaller black gender wage gap is an advanced indicator of much more serious economic and financial hemorrhaging within the larger black community. Baltimore just snapped the entire nation back into that conversation,” the newspaper wrote.
African-American females, when compared with other populations, are almost level with their male counterparts in average income, but this comes amid significant economic decline for black men, their traditional community partners.
Stacy M. Brown is Special to the NNPA from the Washington Informer.