The first Madison Region’s Economic Development, Diversity and Leadership Summit drew about 400 people to the Monona Terrace Community and Convention Center May 9.

It was a combined effort of the Madison Region Economic Partnership (MadREP) and the Urban League of Greater Madison (ULGM) who prior to this year both held separate events in May. This year, the two Madison powerhouse agencies joined forces to address issues that they both have in common as they hosted “Advancing Talent, Opportunity & Prosperity: The Madison Region's Economic Development, Diversity & Leadership Summit.” 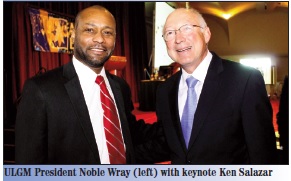 The daylong Summit was a solution-oriented event looking to tackle economic, workforce, and community development issues  rooted in ULGM’s efforts to transform the community into the Best in the Midwest for everyone and MadREP’s five-year Advance Now Strategy for economic growth. 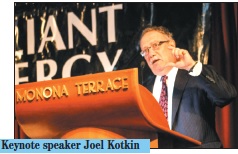 Speakers included Ken Salazar, former United States Senator (2005-2009) and United States Secretary of the Interior (2009-2013), who delivered the afternoon plenary address and Maria Campbell, a 28-year tenure as corporate director of diversity for SC Johnson who is now a consultant providing executive leadership development, training and lecturing on diversity and inclusion as a key driver for business growth and empowerment. She spoke in the Madison Ballroom in the late afternoon which was followed by a Networking and Cocktail Reception at the Grand Terrace.

“It is the whole package that makes Madison attractive,” said Kotkin. “San Francisco has more dogs than kids. Unless you are very wealthy, you cannot afford to have children in San Francisco. These smaller cities are really well positioned now to see continuing growth and to lure more skilled young people from the millennial generation as they become older and start wanting to raise families.”

But to remain strong, Kotkin said, Madison and other cities also need to provide more opportunity for low- and middle-income workers who have increasingly been shut out of the nation’s economic gains. “The key thing is: What is going to shape the United States in the next few years and if we’re going to have economic growth, how is it shared?” Kotkin asked. “I’ve been doing quite a bit of research on this and because the middle and working classes have not been part of this recovery like the 1 percent have, that is actually has made the recovery slower. After all, there [are] only so many people who can buy yachts. What has made America great in the past was its ability to have economic expansion that touched everybody. We’ve seen this in past recoveries, but we haven’t seen it very much in this current one.

“We’ve had the first African American president and we have had the most rapid increase between African American and white incomes since the 1950s. We have simply not created an economy that helps people beyond a very small segment of the population,” continued Kotkin, a professor of urban studies in Orange, California. “We need to ultimately think about how we grow our economy in ways that are more expansive and more inclusive and I think that has to start with economic growth and has to start with growing the economy in a broad number of sectors.” 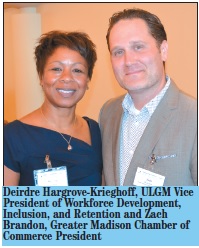 Kotkin, who writes a weekly column for Forbes.com and edits the website newgeography.com., delved into something that he said people might find controversial. “We may be overemphasizing the four-year education for many of our young people,” he said. “If you take a look [at] what is happening with the young people today, many of them are going to college, getting a degree, and are unable to find a decent job and end up working as baristas or working in fairly low-wage positions.

They also have great debt which is depressing their abilities to buy homes.

“Ultimately, we need to think about how we grow an economy that is expanding and also covers a large number of people. We also need to think about when we’re educating our kids — educating them for what? Let’s face it: [for] a lot of degrees that kids are getting — even in good schools — they have incurred a huge debt and have a skill that nobody wants. We have to start thinking about how we train young people for jobs they can actually get. How do we teach them the skills that they will need later in life? Not the skills that the college professors want them to have, not necessarily the skills that might make them feel good about themselves, but those skills that will make them successful in the new economy. That’s something we really need to have a discussion about. I’m not so sure that we should be investing so much money expanding four-year schools. Maybe we should be putting more money into job training and two-year colleges and programs that help young kids get into the workforce, learn the basic skills, show up on time, and complete the basic tasks.”

Kotkin said that we need to make our number-one priority curing inequality and the lack of upward mobility. “We have got to be able to restore the very promise that my generation enjoyed — and most generations before mine had enjoyed,” he said “It’s our obligations as [Baby] Boomers to begin to say, ‘How do we address this issue to make sure that the next decade in America proves to be one of opportunity for the new generation instead of ever-increasing inequality and depressed upward mobility?’”