By Jihad Hassan Muhammad, Special to the NNPA From The Final Call

FERGUSON, Mo. — Michael Brown, 18, was supposed to be starting college in early August, instead he is listed among Black males shot to death by police, security guards, and self-proclaimed vigilantes. Oscar Grant III, Sean Bell, Trayvon Martin, Jordan Davis, and Jonathan Ferrell are among familiar names of those whose lives were taken.
United States Attorney General Eric Holder released a statement Aug. 11 saying a “fulsome review” of the police shooting of the child whose mother wept bitterly before TV cameras was needed. The attorney general’s words came two days after the young man’s death.
“The shooting incident in Ferguson, Missouri, this weekend deserves a fulsome review. In addition to the local investigation already underway, FBI agents from the St. Louis field office, working together with attorneys from the Justice Department’s Civil Rights Division and U.S. Attorney’s Office, have opened a concurrent, federal inquiry,” Atty. Holder said. “Aggressively pursuing investigations such as this is critical for preserving trust between law enforcement and the communities they serve.”
Those promises followed confrontations between Blacks and police, smashed windows and some looting as angry residents vented their frustration and pain. Police officers, they said, harassed participants in what was a peaceful demonstration. Officers laughed, mocked, pointed, threatened and showed no respect for Michael and no remorse for his death, they said.
One young man complained on social media that the mourners were called “porch monkeys” and that police wanted a war. There are only three Black officers in the Ferguson Police Dept., which is 98 percent White, said Anthony Shahid, an advisor to the Brown family. According to the family, the young man’s body lay in the street for four-and-a-half-hours after the fatal encounter. That helped stoke anger and fuel outrage as police would allow no one near Michael’s corpse in the suburb outside St. Louis.
According to eyewitness accounts, Michael and a friend were walking near Canfield Drive in Ferguson when there was an encounter with police. What happened next remains somewhat unclear. The officer reportedly ordered the two to get out of the street. One account says the youth were told, “Get the f—k out the street!” There may have been a verbal exchange and the officer allegedly attempted to pull Michael into the police car. The encounter ended with Michael being shot numerous times.
Witnesses said Michael had his hands up and was unarmed. Various witnesses insist the officer continued to shoot Michael as the teen lay on the ground.
“I saw him turn around with his arms up in the air and they shot him in his face and chest and he went down unarmed,” said Piaget Crenshaw who saw the shooting.
“The officer started choking him and tried pulling him into the police vehicle, his weapon was drawn and he said, ‘I will shoot you, I’m going to shoot,’ when the first shot went off,” said Dorian Johnson, a friend of Michael’s.
“He shot again, and once my friend felt that shot, he turned around and put his hands in the air, and he started to get down,” Mr. Johnson said. “But the officer still approached with his weapon drawn and fired several more shots.”
“We wasn’t causing harm to nobody,” Mr. Johnson told a television station. “We had no weapons on us at all.”  The two were walking together who confronted by police.
Unrest spread among residents in the apartment complex as a result of the shooting and as Michael’s lifeless body lay in a puddle of blood.
St. Louis County Police Chief Jon Belmar flanked by Ferguson Police Chief Thomas Jackson, told reporters Aug. 10, “One of those individuals at the time came in as the officer was exiting his police car. Allegedly pushed the police officer back into the car where he physically assaulted the police officer. It is our understanding at this point in the investigation that within the police car there was a struggle over the officer’s weapon. There was at least one shot fired within the car after that. The officer came back out of the car, he exited his vehicle, and there was a shooting that occurred where the officer in fact shot the subject … they were fatal injuries.” The officer, said to be a White six-year veteran, has been placed on paid administrative leave.
Assisting the Brown family are community activist Anthony Shahid, members of the Fruit of Islam from Muhammad Mosque Number 24 in St. Louis and attorney Benjamin Crump, who is now assisting the Brown family. 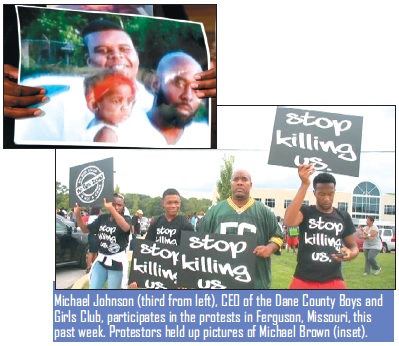