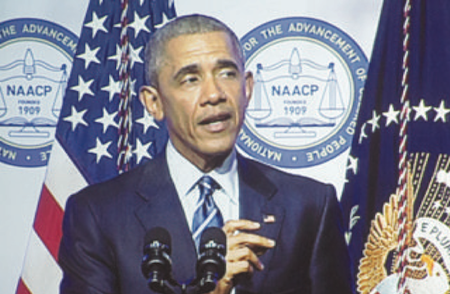 Stacy M. Brown is Special to the NNPA from The Washington Informer.
Even before his keynote address in front of a cheering crowd at the annual NAACP convention in Philadelphia on Tuesday, President Barack Obama was busy practicing what he had already prepared to preach.
A day earlier, the nation’s first black president, and the 44th man to command the Oval Office, commuted the sentences of 46 nonviolent drug offenders, giving them an opportunity for freedom – 13 were serving life in prison – and a once-in-a-lifetime chance at redemption.
And, when it comes to redemption, Obama clearly has re-energized an African-American base who have largely felt abandon during the first seven years of his historic presidency.
“The president’s speech was groundbreaking and it was sweeping in what he said,” Rep. Debbie Wasserman Schultz, the chair of the Democratic National Committee, said.
Passionately, Obama spoke of how blacks are often the target of the criminal justice system.
He said blacks and Latinos are more likely to be stopped and frisked and the president acknowledged something that black leaders and those throughout the community have lamented for decades: jails and prisons are full of African Americans and minorities, many receiving more time for similar crimes committed by whites.
“Any system that allows us to turn a blind-eye to hopelessness and despair, that’s not a justice system, that’s an injustice system,” Obama said to cheers.
“Justice is not only the absence of oppression; it’s the presence of opportunity.”
The president noted that America is home to five percent of the world’s population but he said it’s also home to 25 percent of the world’s prison.
African Americans and Latinos make up 30 percent of the U.S. population, but represent 60 percent of American inmates, Obama said.
Upon arriving in Philadelphia for the convention, the president met with those who’d previously been incarcerated.
The group shared their stories with Obama and discussed their reintegration following their release as well as the work they’re doing to help other formerly incarcerated individuals and at-risk youth through community service, mentorship and education.
“By just about every measure, the life chances for black and Hispanic youth still lag far behind those of their white peers,” Obama said.
“Our kids, America’s children, so often are isolated, without hope, less likely to graduate from high school, less likely to earn a college degree, less likely to be employed, less likely to have health insurance, less likely to own a home.”
“Part of this is a legacy of hundreds of years of slavery and segregation, and structural inequalities that compounded over generations. It did not happen by accident. Partly, it’s a result of continuing, if sometimes more subtle, bigotry whether in who gets called back for a job interview, or who gets suspended from school, or what neighborhood you are able to rent an apartment in which, by the way, is why our recent initiative to strengthen the awareness and effectiveness of fair housing laws is so important,” the president said.
He added that no one can be satisfied or not satisfied until the opportunity gap is closed for everybody in America.
Stacy M. Brown is Special to the NNPA from The Washington Informer.