One year ago, Fountain of Life hosted the launching of MOSES (Madison Organizing in Strength, Equality, and Solidarity), an organization of faith-based communities in and around Madison. MOSES was the 10th affiliate of                  WISDOM, a Wisconsin network of about 145 congregations of 19 different faith traditions that speak out on social justice issues.
At its launching, MOSES        officially became involved in       WISDOM’s 11×15 Campaign, whose goal is to reduce Wisconsin’s prison population by half (to about 11,000, thus ‘11’) by the end of 2015 (thus ‘15’). About 200 people turned out to participate in the launching in November 2012.
Once again, on Saturday, Nov. 16, about 200 people will gather at Fountain of Life, this time to honor the accomplishments of the past year. The purpose, says MOSES vice president Minister Caliph Muab-El, “is to celebrate the success of building a grassroots social justice organization that is very much needed in the community.
“We have to be the voice for the voiceless,” Muab-El continued. “I’m extraordinarily proud of MOSES’ ability to unite faith-based organizations around one common goal that for a long period of time everyone has overlooked, and of its ability to get people to cross all boundaries — of race, creed, and culture — and get us to focus together in unity on one solid issue that humanity has been crying for, for quite a while.” 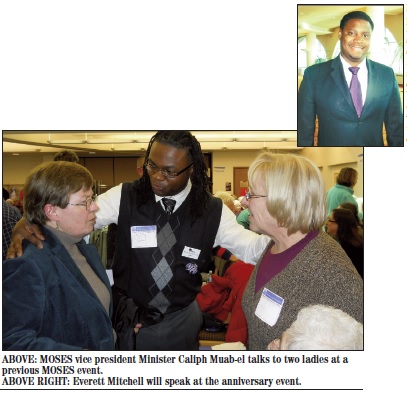 Everett Mitchell, University of Wisconsin-Madison Director of Community Relations and pastor at Christ the Solid Rock Baptist Church, will speak; the Zion City International Church Choir will sing. Melly Mel’s, Holy Wisdom Monastery, and the Willy Street Coop will provide food. The event is sold out.
For its first year, MOSES focused on building a solid organization of knowledgeable people committed to creating a safer, stronger, more inclusive community. One critical issue, WISDOM had determined, was a  reduction in Wisconsin’s prison population. For example, Wisconsin incarcerates 12.8 percent of its African American men, a higher percentage than any other state in the U.S.
A focus early in the year was Treatment Alternatives and Diversions (TAD), which means community-based alternatives to incarceration. A study by Human Impact Partners projected that putting $75 million in the state budget for TAD would result in 3,100 fewer prison admissions, 21,000 fewer jail admissions, 1,000 fewer crimes over five years, and up to 1,619 more parents staying in the community with their kids. The amount actually put in the 2013-15 state budget for TAD was 150 percent more than what was in the previous budget. MOSES and WISDOM considered this a success, though it was much less than they had requested: They found strong bipartisan support for TAD funding. Thirty-six additional Wisconsin counties have already submitted applications for this money, in addition to the seven that had already been receiving some. Their requests totaled $7 million, but only $1.5 million had been budgeted.
WISDOM has recently divided its focus into four task forces, one of which continues to work for additional TAD funding. The other three task forces address  in-prison concerns like lack of parole and earned release and abuse of solitary confinement; sentencing reform; and post-release issues like transitional jobs and the permanent punishment criminal-conviction records insure. Each MOSES member is on one of the task forces, which meet through statewide conference calls. MOSES members try to stay informed about the issues, which are often very complex, and to lobby their government representatives for better ways to deal with the offenders in our midst.
Why is fewer people in prison desirable? It costs four times more ($32,000/year) to lock someone up than to rehabilitate him or her in in the community. Offenders in community-based corrections can avoid being separated from their children; families stay stronger. Graduates of alternative programs commit fewer crimes that ex-prisoners.  Drug courts are six times more likely than prison programs to keep offenders in treatment long enough for them to get better; drug offenders and drunk drives account for 80 percent of the growth in Wisconsin prisons since 1996. The programs offered through mental health courts reduce the likelihood of psychiatric hospitalization and jail time for their graduates. (This information is taken from a 2011-2012 study by Human Impact Partners.
As already mentioned, the Nov. 16 event is sold out; no tickets will be available at the door. But if these issues interest you, check whether your church is already involved; if not, encourage it to join. You can also join as an individual. MOSES meets 10 a.m. to noon on the first Saturday of every month, usually at First Congregational United Church of Christ, corner of Breese Terrace and old University Avenue.