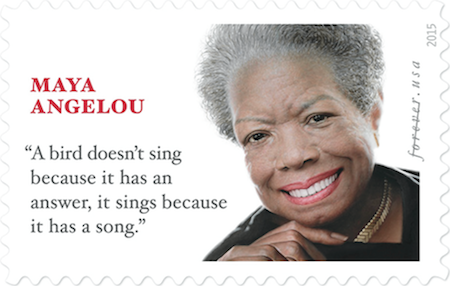 WASHINGTON, D.C. (NNPA) — Less than a year after her death, Maya Angelou has been further immortalized on a U.S. Postal Service commemorative Forever Stamp.
An all-star assembly gathered to witness the first-day-of-issue stamp unveiling ceremony, held at the Warner Theatre in Washington, D.C. The at-capacity audience included First Lady Michelle Obama, U.S. Attorney General Eric Holder, musician Roberta Flack; two of Malcolm X’s daughters, Ilyasah and Qubilah Shabazz, and other notables.
Melissa Harris Perry, who first came under Angelou’s wing in the early 1990s as her intern at Wake Forest University, emceed the event. Former UN Ambassador Andrew Young gave the invocation. Singer Alyson Williams, who was introduced as Angelou’s “personal songbird,” performed the national anthem and the Black National Anthem, “Lift Ev’ry Voice.”
“The truth is, this Forever Stamp registers the applause of tens of millions of readers over the world where the prose and poetry of Maya Angelou is translated in 17 languages and still counting,” said author and educator, Eleanor Traylor, just before reading a passage from I Know Why the Caged Bird Sings.
Traylor was on a short list of featured speakers at the ceremony, which included Oprah Winfrey, journalist, Sophia A. Nelson, and Nikki Giovanni and Sonia Sanchez, who each recited original poetry.
“On this past Saturday, her birthday April 4th, it would’ve been her 87th birthday,” Winfrey said, adding that she had spent the day reading Angelou’s poetry in commemoration. “I miss her so. I’m honored to be here, to stand as her daughter sister-friend at the unveiling of the Maya forever, Forever Stamp.”
In the middle of her tribute, an area-wide power outage cut electricity to the theater, but Winfrey powered through a recitation of “Phenomenal Woman,” without the microphone.
The image featured on the stamp is a reprint of the oil painting portrait by Ross Rossin on display at the National Portrait Gallery in Washington. The portrait’s unveiling, held the day after Angelou’s 86th birthday last year, was her final public appearance.
“Today, this new Forever Stamp serves as a tribute to Angelou’s humanity, and contribution to our nation,” said Megan J. Brennan, postmaster general and CEO of the USPS. “You will notice that there’s some other words on her stamp: forever and USA. It is the postal service’s way of honoring and remembering those who left an enduring and indelible mark on our society, and who represent the best of America.”
The featured words on the stamp, however—“A bird doesn’t sing because it has an answer, it sings because it has a song”— have caused a bit of controversy. Although Angelou has used the line in her travels and has become widely associated with it as a result, the quote actually originated with another writer.
The Washington Post was the first major outlet to point this out. It also reported that USPS spokesman, Mark Saunders responded via email: “Had we known about this issue beforehand, we would have used one of [Angelou’s] many other works. The sentence held great meaning for her and she is publicly identified with its popularity.”
Currently, the USPS has no plans to alter the quote. Angelou’s stamp is a commemorative one – as such, it will only be issued once and for a limited time. If the USPS does cease production and reissue the stamps with a different quote, this single batch will become an even more valuable collector’s item.
After the actual unveiling, her son, author Guy Johnson delivered an original ode to his mother.
“I point to the life of a little Black girl from Stamps [Arkansas], whose words and actions we honor here today. With heart in hand she stepped out on His word and believed. She spoke out in clarion tones for justice and truth—and look at what the little Black girl from Stamps achieved.”
Jazelle Hunt, a Washington correspondent for the National Newspaper Publishers Association News Service, recently completed week-long training at the University of Southern California as one of 14 journalists awarded a 2014 National Health Fellowship. Hunt is a Howard University graduate.