“It's been a great run; but all good things must come to an end. It's good to move over and let the younger people take over. They are our future,” says Linda Hoskins. “I have really enjoyed all of the great people and organizations that have helped us along the way. I've had a great group of people that helped me.
Hoskins was the president of the Madison chapter of the National Association for the Advancement of Colored People (NAACP) since 2003 until she retired in January of this year.
“I've had a lot of great memories here at the NAACP,” Hoskins tells The Madison Times in an interview at the brand-new Cargo Coffee East. “We've had tremendous speakers here at our [NAACP Ida B. Wells] Freedom Fund Banquet including the last NAACP President Ben Jealous, [U.S. Black Chamber Inc. President] Ron Busby, [former Lt. Gov.] Barbara Lawton, and [Vice President for Stakeholder Relations for the NAACP] Dr. Nelson River. We had [former Negro League baseball player] Dennis "Bose" Biddle. I've had a chance to meet so many amazing people.
“Our last Freedom Fund banquet was wonderful,” she adds. “We felt it was time to move over and let other people get some of the accolades. I pray for the next president and executive committee that they will be able to do well.”
The mission of the National Association for the Advancement of Colored People is to ensure the political, educational, social, and economic equality of rights of all persons and to eliminate race-based discrimination. Their vision is to ensure a society in which all individuals have equal rights without discrimination based on race.
“I come from Arkansas where my dad was a member in the late ‘50s. As a young person, I grew up in the NAACP, so I have been involved for a long time,” Hoskins says. “The NAACP has always been a part of my life.”
The NAACP was founded in 1909. The Madison branch was first chartered in 1943.
“The problems in Madison are getting worse and I'm getting older and I felt it was time for me to retire. I looked in the mirror about a month and half ago and looked at all of the gray hairs and I felt it was time to go,” Hoskins says. “My stress level had gotten quite high. People would call me at up to 12:30 at night with a child, husband, or boyfriend in jail and they would want me to take them down there to help get them out of jail. My phone would ring at 5:30 in the morning and a mother would be crying about an expulsion [of her child from school] and I had to figure out a way to help that child. A lot of people that I helped didn't have transportation — they needed rides to school, court, the hospital. I would always go and get them.”
Compared to other states, Wisconsin has the highest percentage of black men in prison in the country.  Hoskins believes African American men are unfairly treated during all stages of the court process.
“Part of the stress for me was caused by always going to court and seeing that the criminal justice system isn't fair. You have a black and white system. A white and minority criminal justice system,” Hoskins says. “But I always appreciated [Dane County] Sheriff Dave Mahoney. He would always get back to me and help me solve problems. He always was so helpful. Same thing with District Attorney Ismael Ozanne. He always took time to see what the problem was, who was on the case, and that the person was treated fairly. We've had great relationships with those two and I've had a very good partnership with the governor's office — Democrats and Republicans — and the legislators.”
To combat the tremendous racial disparities, the NAACP of Dane County has just started up (See sidebar below).
“I wish them all the best. We really need them,” Hoskins says. “We have a lot of people throughout Dane County who need help. I I think they will do fine.
“Racial disparities in Madison are pretty large. We have a lot of work to do. It's not all on our white brothers and sisters. We have to take responsibility and do our part. If we see things going on, we need to help fix it,” she adds. “You can't be a pastor over a church and look down at the people; you have to help the people. You can't be the executive director and speaking about issues of the community when you aren't even part of the community. We have to work together and do this starting from the grassroots level.”
Hoskins is very proud of the NAACP Madison Youth Council that she and daughter Shelia Stubbs chartered to get young people of color more involved in important issues.
She says that she wants to be remembered as somebody who was very concerned about people who were not being treated fairly.
“When I think about civil rights, it hasn't been a one-color journey for me. I've fought for African Americans, Hispanics, Asians, Africans, and South Pacific people,” she says. “I'm hoping that as time goes by that I can still get out and help the people. My church is a big part of my life.  Civil rights will always be a big part of my life.
“I'm an ordained minister [at End Time Ministries] and also an overseer of the church and chairperson of the mother's board,” she continues. “We've started the church here and it's been 11 years and I want to go into the ministry full-time.
“I want to be remembered as a person who tried to help whoever needed my help. I was always there to listen and work on their problems,” Hoskins adds. “And when I'm gone, may the work I've done speak for me and may the life I've lived speak for me.” 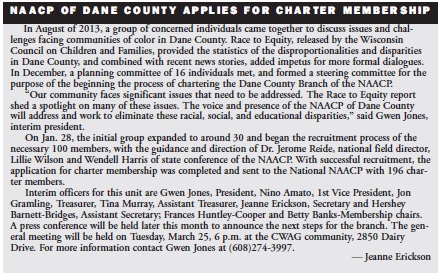