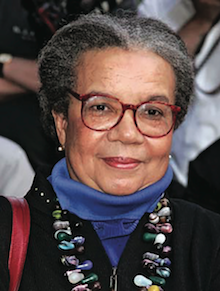 Marian Wright Edelman, NNPA Columnist
The odds were stacked against Britiny Lee before she was born.
Her mother was addicted to drugs, like Britiny’s grandfather and many others in their poverty-stricken Cleveland neighborhood. Britiny’s mother used drugs throughout her pregnancy and went to prison for a year just after Britiny’s birth. As a poor, Black “crack baby” with an addicted, incarcerated mother and an absent father, Britiny started life in danger.
Being born into an unstable poor family or to a single, teen, absent parent is a known risk factor in ‘America’s Cradle to Prison Pipeline’ crisis. The disadvantages millions of poor children and children of color face from birth along the continuum to and through adulthood can include no or inadequate prenatal and health care; no or little quality early childhood education and enrichment; child abuse and neglect; failing schools; grade retention, suspension, and expulsion; questionable special education placements; dropping out of school; unaddressed mental health problems; violent drug infested neighborhoods; and disproportionate involvement in the child welfare and juvenile justice systems.
Entering the child welfare system would have been still another risk factor for baby Britiny but she was lucky. Her grandmother, who already had custody of Britiny’s older brother and sister, stepped in. She brought Britiny home, too.
Britiny says, “My grandmother stepped up to the plate to raise us because she didn’t want us to go into the foster care system.”
Britiny’s grandmother didn’t have a lot of money, but she was a stable source of love and support throughout childhood and Britiny flourished in her care.
Despite doctors’ concerns when she was born as a drug-addicted child, Britiny was resilient and became a straight-A student who loved school from the beginning. Britiny’s grandmother was her rock even while struggling with the autoimmune disease lupus, which got worse as Britiny got older. When she was 8 years old, her grandmother suffered a seizure when they were home alone and Britiny had to call 911 and ride in the ambulance with her grandmother to the hospital.
From then on, she was terrified of losing her grandmother. Britiny’s mother Felicia, who had come in and out of her life throughout her childhood, was struggling towards sobriety. Nine months after Felicia became sober, when Britiny was 10 years old, her grandmother died.
Felicia remembers the moving moment: “[My mother] held my hand and she told me, ‘Licia, I want to go home.’ And I thought that she meant go home, like put her in the car and take her home. No. She was saying she was tired and she was ready to go home to Glory . . . She looked at me in my eyes, and she said, ‘And God told me that you were ready, that you were ready to be a mom, that you’re going to be a good mom, that you’re not going to use drugs anymore, and that I could go.’”
Britiny’s mother was finally ready to step in, regain custody, and learn how to be the parent her daughter needed and deserved. Today, Britiny is a high school senior about to graduate from Cleveland’s John Hay School of Science and Medicine and dreams of becoming a cardiac surgeon. She recently received a Beat the Odds scholarship from Children’s Defense Fund-Ohio.
She says of her beloved grandmother, “She’s looking down on me. I’m sure she’s proud, and right now I just want to make her even more proud. I want to show her that she didn’t fight for me for nothing.”
Britiny’s grandmother was one of the many caregivers raising children in “kinship care” or “GrandFamilies,” headed by grandparents or other relatives who step in when parents are unable to do so. Sometimes a child is removed from parents’ care by the state and placed with relatives in foster care; in other cases, children like Britiny are placed informally with relatives outside foster care.
More than 6 million children are being raised in households headed by grandparents and other relatives. Of those 6 million, 2.5 million children are living in households without their parents present. These relative caregivers like Britiny’s grandmother are willing to care for the children, but often need financial or other help to appropriately meet their children’s needs.
A number of states have used subsidized guardianship programs to support kinship families and GrandFamilies. Kinship care has been found to help children maintain family, and oftentimes community, connections. There is also strong evidence that children placed in kinship care experience greater stability, have fewer behavioral problems, and are just as safe – if not safer – than children in non-relative care.
In Britiny’s case, all of these positive outcomes came to pass, and after her grandmother “stepped up to the plate,” a child who could easily have become a statistic is beating the odds and is a star with a bright future.
Marian Wright Edelman is president of the Children’s Defense Fund whose Leave No Child Behind mission is to ensure every child a Healthy Start, a Head Start, a Fair Start, a Safe Start and a Moral Start in life and successful passage to adulthood with the help of caring families and communities. For more information go to: www.childrensdefense.org.