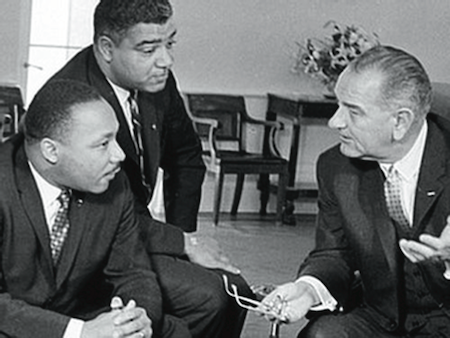 President Lyndon Johnson (left), Martin Luther King (right) and Whitney Young in 1965 (AP Photo)
Special to the NNPA from the Afro-American Newspaper Rep. Bob Goodlatte (R-Va.), chairman of the House Judiciary Committee, he sparked controversy on Jan. 14 saying that, “The Voting Rights Amendment Act” – which would restore the pre-clearance requirement by the Justice Department for states mainly in the South – “is not necessary.” He has decided not to hold a hearing on the bill that would restore key elements of the Voting Rights Act of 1965 and this has outraged African-American and civil rights leaders.
Goodlatte said the watered down Voting Rights Act (VRA) that is presently in effect protects voters from discrimination but Rep. George Butterfield (D-N.C.), chairman of the Congressional Black Caucus, disagrees. “I am deeply troubled that Goodlatte doesn’t think it is necessary to restore the Voting Rights Act,” Butterfield said. “We began this Congress very hopeful to build upon the bipartisan work of Reps. Jim Sensenbrenner (R-Wis.) and Jim Clyburn (D-S.C.). If this is indeed the position of the entire Republican Conference, then they have clearly drawn a line in the sand – one in which they are on the wrong side of.”
The Voting Rights Act of 1965 was signed into law by President Lyndon B. Johnson, a Democrat. It has been renewed with amendments by Presidents Richard Nixon, Gerald Ford, Ronald Reagan, George H.W. Bush, and George W. Bush – all Republicans. However, the Supreme Court gutted Section 4B and 5 of the VRA that required states and local jurisdictions with a history of racial discrimination in voting to approve election law and practices with the Justice Department.
The court’s conservative majority said the VRA was outdated and that Congress should update it to reflect the changes that have taken place.
Wade Henderson, president and CEO of The Leadership Conference on Civil and Human Rights, also disagrees with Goodlatte’s decision. “Chairman Goodlatte has paid no attention to the rampant voting discrimination still happening throughout the country, most recently in the 2014 midterm elections,” Henderson said. “The now-weakened [VRA] lacks the ability to protect voters from discrimination before they are denied the right to vote. The remedies that the chairman says still exist are costly and time consuming to pursue through the courts and decisions in these cases often come long after voters have been excluded from elections that they have every right to participate in.”
Hilary Shelton, Washington NAACP bureau chief, said his group met with Goodlatte last year to discuss legislation to restore the VRA to its original form. “We made it clear that we supported hearings on the VRA and we have bipartisan support on this,” Shelton said. Shelton said that representatives of the Virginia NAACP, including those who live in Roanoke, a major city in Goodlatte’s district, met with him, too.
One of the arguments anti-VRA advocates make is the election and re-election of President Obama in 2008 and 2012, respectively. They say that minorities cannot be considered disenfranchised when the country, still majority White, elected an African-American to its top political position.
However, Kathleen Collier-Gonzalez, senior attorney and director of the voter protection for the Advancement Project, counters that view. “The measure of success is not the re-election of an African-American president,” she said. “You still have very serious problems in terms of people who don’t having ‘acceptable’ voting identification, and states reducing the early voting period and eliminating Sunday voting. As a matter of fact, I think there is a backlash because of our first African-American president.”
Shelton said it was because of the VRA that Obama became president and it should be preserved as a tool to help people become more involved in politics.
Collier-Gonzalez said government identification as the only acceptable form for citizens to be able to vote is similar to the poll taxes that some Southern states in the pre-Civil Rights era levied against its citizens with the subtle purpose of disenfranchising Blacks. She notes that many young people, seniors, and low-income citizens don’t have government identifications that are acceptable to voter registrars.
Butterfield is urging the House Republican leadership to override Goodlatte’s decision.
“I call on Speaker [John] Boehner, Majority Leader [Kevin] McCarthy and Majority Whip Steve Scalise to reverse this decision and make restoring the VRA a priority,” the representative said. “The weakening of the VRA left millions of Americans vulnerable to discriminatory state laws. To do nothing sends a terrible message, not only to minorities, but to anyone who believes the right to vote is essential to our democracy and way of life."