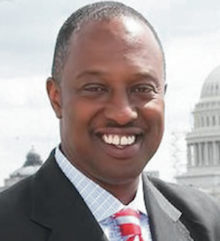 Ron Busby urges a personal relationship with banker.
WASHINGTON, D.C. (NNPA) – Black-owned businesses face tougher challenges than other groups when seeking bank loans, according to a new study by the Gallup polling company commissioned by Wells Fargo.
Nearly half (47 percent) of Black-owned businesses operate in the South and the study found that 77 percent of Black business owners use personal cash to finance their businesses.
African-American business owners were less likely to borrow money for business reasons than Asian and Hispanic business owners.
“Twenty-two percent of African American business owners say they felt that discrimination from a financial institution based on their race, ethnicity, gender or sexual orientation had impacted their chances to obtain credit for their business,” stated the report. “Among those who indicated they needed credit, African American owners, in particular, say they were not able to get all the credit they needed.”
According to the report, 13 percent of Black business owners obtained the credit they needed, compared to 20 percent for Hispanic owners, 24 percent of Asian owners and 23 percent of owners in general.
The report also found that the larger the loan request, the higher the rejection rate. Overall, 27 percent of applications for larger loans were turned down and only 7 percent for smaller ones.
The highest rejection rate – 38 percent – was among Black business owners seeking a loan of at least $250,000; 17 percent of Blacks seeking a loan less than $50,000 were rejected. By comparison, 33 percent of Asian owners were turned down for larger loans and 14 percent for smaller ones. For Latino business owners, the rejection rate was 26 percent for large loans, and 15 percent for smaller ones.
Once banks declined a loan to Black business owners, they needed they were more likely to apply for credit again than other small business owners.
In a statement, Lisa Stevens, the head of Small Business for Wells Fargo, said that serving diverse communities has long been a focus area and priority.
“For this reason, we commissioned the Gallup study, which gave us new insight into the perceptions and experiences of diverse business owners working with banks, and how we can improve as a company and as an industry,” said Stevens.
In an interview, Ron Busby, president of the U.S. Black Chambers, Inc., said there is some good news amid the bad.
“If we’re being successful with the limited amount of resources that we have today, our future looks wonderful,” said Busby. “I think for Black businesses to be successful, they need to go in proactively. They need to have established relationships with their bankers early on before there’s an opportunity.”
Busby continued: “When they’re first thinking about starting a business, they need to start a relationship with their banker.”
In an effort to address some of the challenges affecting minority business owners related to the lending industry, Wells Fargo committed to a four-point plan that includes more education and credit coaching for borrowers and $75 million in grants and investments in micro-lending programs aimed at diverse business communities.
“We know that in order to address the range of financial needs within all of our communities, we need to support and work with the ecosystem of organizations that serve small businesses,” said Jon Campbell, executive vice president, government and community relations for Wells Fargo, said in a statement. “Through this increased investment and connections with community lending organizations, we are making meaningful strides toward increasing access to capital for small businesses, as well as helping more business owners get the coaching and educational resources they need to succeed financially long-term.”
Freddie Allen is the Washington Correspondent for the National Newspaper Publishers Association (NNPA). A graduate of Howard University, Allen was a staff writer, photo editor and general manager of the District Chronicles. He also served as editor-in-chief of Ledge, a magazine devoted to healthy lifestyles and HIV/AIDS awareness among young people of color.