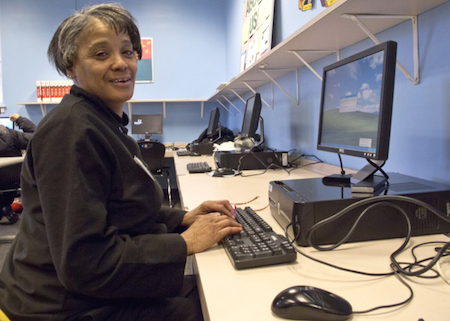 Free community-based computer classes are often underfunded small-scale operations, which contribute to the digital divide. (DC Central Kitchen/Flickr/CC BY 2.0)
As education, jobs, and the national and global economy go digital, people without broadband (high-speed Internet) access risk being left behind. This disparity in who’s online and who isn’t is often called the digital divide – and Blacks and Latinos are more likely to be in the latter group.
But people access the Internet in different ways. Black people are more likely than their White counterparts to own a smartphone and use it for Internet access. At the same time, 12 percent of Black people are smartphone dependent – they have few or no other options for accessing the Internet at any given time. This is compared to 4 percent of Whites and the 7 percent national rate.
“Even though low-income households are over-indexing on smartphone use, I don’t think that’s how you want to type a paper, do your research, do your homework, apply for jobs, or apply for scholarships,” says Jessica Rosenworcel, Federal Communications Commission (FCC) commissioner, speaking at a Multicultural Media, Telecom, and Internet Council (MMTC) event.
The divide can also be traced to educational outcomes, from elementary school up to college. It’s a problem known as the “homework gap.” In an effort to prepare kids for a digital world and workforce, teachers and schools are increasingly assigning homework that requires Internet access to complete – 7 in 10 teachers do, according to Pew figures. But many students, particularly students of color from migrant/immigrant or low-income families, do not have broadband access or any device at home.
“We have 29 million households in the country with school age children. Of that, 5 million do not have broadband at home,” says John Horrigan, senior researcher on the Internet and technology at Pew Research Center. “And within that 5 million, African American households and Hispanic households are disproportionately represented.”
Among Black households with less than $50,000 annual income and school-age children, 38 percent do not have broadband access. Above that income, the figure is 13 percent; among households earning below $25,000 per year, 46 percent do not have Internet access at home.
While students face the homework gap, job seekers who aren’t as comfortable using computers can face difficulty in securing a career and building wealth. As more industries require some level of computer literacy, and as jobs without these requirements become scarcer, it will become harder to earn a living wage without these skills.
“Our economic future depends on [getting people online],” Rosenworcel says. “Already, 50 percent of the jobs that are in the economy today require some level of digital skills. By the end of the decade, that number is 77 percent.”
Income inequality is both a cause and a byproduct of the digital divide. People with low income often cite cost as a barrier to getting or keeping Internet service at home. But there are other reasons people aren’t online. For some, it is a lack of comfort or familiarity, and poor access to training programs that could help. For others, it’s a simple lack of relevancy; what’s the point of putting money and effort into getting a high-speed connection, especially with serious socioeconomic realities to overcome?
Relevancy tends to be a primary reason among older Americans. According to a survey report from Project GOAL (Get Older Americans Online), 70 percent of Americans who aren’t online say they simply have no interest. Those who are interested primarily want to get news or information or use e-mail, and not much else.
“Trying to figure out what the value is in going online is still an issue for the older adult communities,” says Debra Berlyn, executive director of Project GOAL.
“Then within that community there’s a huge difference between a 65-year-old and an 85-year-old in terms of how they may value going online. So those huge discrepancies mean that you have to show the value a bit differently.”
For seniors, the Internet can add a social dimension to life that can often decline in old age. One 2009 study from Washington policy think-tank, the Phoenix Center, found that seniors who use the Internet are 20 percent less likely to report being depressed. Another 2009 study from neuroscientists at the University of California, Los Angeles found that just one week of Internet use boosted brain function in middle-aged and older users.
Over the past few decades there have been many attempts to close these digital divides. The federal Broadband Technology Opportunities Program, for example, supports the establishment of better broadband infrastructure and public computer centers. The FCC’s E-rate program seeks to connect the nation’s classrooms and school libraries to the Internet. Another FCC program, Lifeline, which originally offered landlines for low-income families, is exploring a modernization to include broadband Internet.
But these programs are generally underfunded, not well-known, deprioritized when funds are allocated, or unable to evolve fast enough. Experts believe that getting everyone online will require prioritizing the Lifeline modernization, as well as creating an effective, inclusive plan to reach the people who need it most. Experts also believe that public-private partnerships will be key.
“One big takeaway is that these communities need to be heard,” says Nicol Turner-Lee, vice president and chief research and policy officer for the MMTC. “Because what basically happens is once policy is created, in terms of cultural sensitivity, they’re not matched up to reality. So we end up…back here five years from now, still saying that broadband has not touched or changed the lives of individuals.”
Jazelle Hunt is a Washington correspondent for the National Newspaper Publishers Association News Service.