Nothing can bring Tony Robinson back.
Protesters have said it. The family has said it. Even Dane County District Attorney Ismael Ozanne said it earlier this week when he announced his decision to not criminally charge the Madison police officer who fatally shot Robinson.
So, what’s next?
For all of the parties involved — the community, police, Robinson’s family — that answer is different, if it’s known at all. 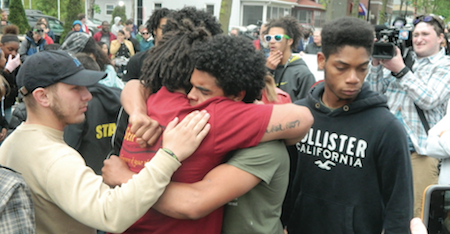 Protesters mourn Tony Robinson during a protest this week.
Photo by Steven Potter
What is known, however, is that everyone involved faces difficult times and decisions ahead. While there has been a recent increase in attention in cases similar to Robinson’s — where a white law enforcement officer has killed an unarmed person of color — this is all still uncharted territory. There is no handbook for how to react, how to heal or how to effect change.
Each of the parties involved must forge their own path as new details, actions and emotions emerge.
Next Steps for the Family
The family of Tony Terrell Robinson, Jr., who was a 19-year-old biracial man when he was fatally shot by Madison police officer Matt Kenny following an altercation on March 6, will continue to mourn and continue to wait.
Now that the decision has been made by District Attorney Ozanne that Officer Kenny acted in a lawful fashion in using deadly force that caused Robinson’s death, the family will wait while the law firm they’ve hired reviews the hundreds of pages of reports and other evidence related to the case.
“My firm is conducting its own investigation and we are incorporating what we’ve learned from what the city has made available,” said Robinson family attorney Jon Loevy.
One option for the family is to pursue a wrongful death lawsuit possibly against Officer Kenny and the Madison Police Department, said family attorney Jon Loevy.
“That is certainly one of the options on the table but we are going to review the evidence and make a careful and reasoned decision,” he said, stressing that they are far from making that decision. “We are reviewing all of the evidence they made available to us and we haven’t even finished reading it yet.”
“My firm is conducting its own investigation and we are incorporating what we’ve learned from what the city has made available and the (police squad car) dash cam video,” Loevy continued. “And then we’re going to make a decision on how to proceed.”
At a news conference immediately following Ozanne’s announcement Tuesday, Loevy expressed the family’s disappointment that charges will not be leveled against Kenny and that the case won’t be heard by a jury.
Specifically, Loevy further questioned why Officer Kenny decided to enter the house on the 1100 Williamson Street that early evening where Robinson was without waiting for backup from other officers, a decision Loevy said created "a confrontation that led to an unnecessary death."
Protesters to Push Forward
Brandi Grayson of the Young, Gifted and Black Coalition, which has been active in organizing many of the protests and marches following Robinson’s death, said her group is pursuing an agenda of action.
“We have three campaigns we will be focusing on,” she said. “One is our United Nations campaign. We want the UN to come here and do a dual track investigation of not just the death and murder of Tony Robinson but one which looks at the racial disparity rates not only in Dane County but in the State of Wisconsin and of our police department.”
“Another campaign is (to create) community control over police,” Grayson continued. “We must focus on shifting power from the state to the people in the community to make decisions when to hire and fire police, setting priorities for police, setting policy for police.
Another campaign YGB is working toward is to free 350 inmates from the Dane County jail “because 50 percent or more of people there are Black or brown people,” she said, adding that “Blacks make up only 5 percent of the population in Dane County and yet we make up more than 50 percent of the jail population.”
“We know that that is a direct result of structural racism,” she continued. If we’re going to move in the direction of eradicating racism, then we must use radical methods.”
Grayson says community members shouldn’t sit by and watch as things unfold.
“We need to get involved. We need to show up and show out,” she said. “It’s important that people gain understanding of what we’re doing and why.”
Making Community Connections
Michael Johnson, president and chief executive officer of the Boys & Girls Club of Dane County, also has a multi-faceted plan to address some of the racial disparities that he feels relate to the death of Robinson and that can help the community begin to heal.
“There are some major things we need to tackle,” he said. “One is investment in education for African American and Latino boys — to create and continue the programs for those (who) do not traditionally perform well in school.” 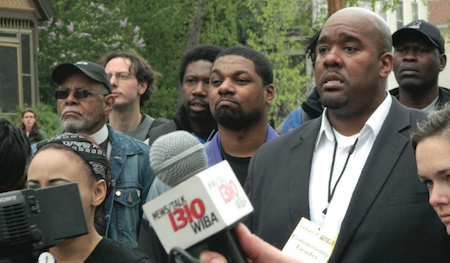 Michael Johnson of Boys & Girls Clubs, right, and others look on during a protest
Echoing Grayson’s statements about the high number of people of color in local jails, Johnson continued, “(We also need to address) the issues around disparities in our incarceration rates. That’s a real issue. We need to look at how we reduce recidivism as well.”
“And all of this is tied to economics,” said Johnson. “When you look at these unemployment rates, there’s a 20 point gap for African Americans compared to our white counterparts and for Latinos, I think it’s a 16 point gap. So we have to find a way to provide training and workforce development for people of color to get them out of poverty and to get them into the middle class.”
“If we can begin to make investments in these critical areas, that’s how we begin to heal as a community,” he said. “What would have happened that night if Mr. Robinson had a job and had instead been at work?”
The Police’s Plans
For their part, the City of Madison Police Department is also pursuing initiatives and will continue other efforts to ease tensions, said Chief Mike Koval.
In terms of improving relations between the police and the community, “obviously there are still a couple of fronts that need addressing,” said Koval, adding that he’ll continue to hold public forums in all of the police districts around the city, which provide citizens a chance to “ask unabashedly whatever questions they will of me or that district’s command staff to get the unfiltered, straight-from-the-horse’s-mouth answers.”
Koval also commits to continue meeting with various community groups, nonprofits and religious organizations to work out the issues they have.
“We have been in dialogue for a number of months — and obviously, that pace has quickened with a greater sense of urgency (since) the March 6 event and the death of Tony Robinson,” he said, adding that from those meetings a new task force will be created to make “recommendations for improvement in things like hiring and diversity (within the police force) and use of force issues.”
They mayor and city alders will also be forming a group to look at the police department’s policies, procedures and training protocols “to see what, if anything, could better be discussed and see if there’s any de facto implications that could lead to racial disparities and disharmony in the community.”
“Over time, trust building — as I tell my officers — really begins at an organic, grassroots level with one call, one contact at a time,” Koval continued. “(It begins with) showing the community how deeply we engaged we are, how relational we want to be and knowing full well that this has been a polarizing incident for our community. We have to be even more willing to be visible and willing to share the successes that are occurring everyday and not be overcome (and that those successes) not be dwarfed by officer-involved shootings.”
Not to avoid the elephant in the room, Koval also addressed the next steps involving Officer Matt Kenny and his future with the police force.
“He still has to be subjected to a complete administrative review of his conduct on the night of March 6 by the (department’s) professional standards unit,” said Koval, adding that those findings should be ready within about a week. “Once a I take a look at that and see if they have found any administrative violations that have to be resolved and assuming there’s a clean bill of health there, then we’d have to sit down and begin to build a return-to-work plan for him. And that will be coupled with what’s in the best interest of Matt Kenny and in the best interest of the community.”