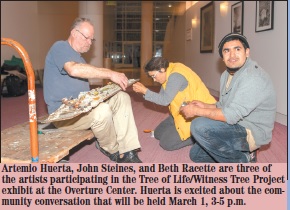 For Artemio Huerta, who was born in Mexico, what attracted him to Wisconsin were the natural places, the woods, the rivers, and the like. He also appreciates the welcoming nature of people in the state and their openness to other cultures, especially folks in the Madison area.
Huerta’s artwork, three pieces of which are currently on display as part of the Tree of Life/Witness Tree Project, deals with nature and in many instances, man’s relationship with the environment.
The Tree of Life/Witness Tree Project art exhibit at Overture Center in the Playhouse Gallery, lower level, runs through March 9. The exhibition contemplates the tree as a symbol of life on earth throughout history and across cultures, organizers say.  In addition to Huerta, Nancy Blake, Lester Dore, Beverly Gordon, David Ott, Rebecca Power, Beth Racette, Karen Reppen, and John Steines also have work on display.
Huerta is a self-taught artist, whose art exposure in school pretty much consisted of one art class, drawing using paint by number system. Still, he said he was always attracted to places that had paintings hung on the walls. “I would think, ‘I wish I could do something like that,’” Huerta said.
Before deciding to move to Dane County, he lived in California, North Carolina, and northern Wisconsin. In 2004, Huerta had been working at a Wisconsin Christmas Tree farm and the season was over.
“The job was done, so I just decided to paint,” he said. Huerta headed to Wal-Mart in Black River Falls where he was living at the time, bought a brush and some acrylic paint, and decided to give it a whirl.
Why? The artist explains…..
Huerta talked with exhibit goers about his work titled, “Why?” at the Feb. 8 Tree of Life/Witness Tree Project artists’ reception at Overture.  The many layers of the tree represent the layers of time and the layers of life, he explained in describing the acrylic creation.
A dried up canyon or riverbed is depicted, along with a person who’s died as a result of hanging or suicide. “I’m not saying this (scene/situation) is going to happen,” he said earlier.
“Nature’s smarter than us,” he said, and went on to further discuss specific components of the piece, such as the pair of crows. “Crows are really smart birds, and they say, ‘look what he’s done.’ We don’t really know how birds’ brains work…”
The snail figure with the clock represents time, and how sometimes times feels like it goes by very slowly, detailed Huerta, who is inspired by artists like Salvador Dali. He described Dali’s approach as “out of the regular thinking pattern” and “out of the natural pattern.”
The image of the face, which appears in the outline of what looks like a rock formation, symbolizes “the eyes, the view of the artist.” He spoke about the Inca people, and how they knew by instinct about a lot of things. The Incas learned from the shadow of the tree, the temperature, etc.
“What attracts me so much about painting, is it’s an idea,” he stated. Huerta marvels at how people were able to paint so vividly and clearly back in the day when there was no technology such as clear photos to use as a guide.
It took almost a year to complete the work, as Huerta paints in his free time when he is not busy with his work in the restaurant industry.  Speaking of restaurants, his artwork graces the walls of Mexican restaurants in the Portage area, where he has painted six murals.  Huerta also has two pieces at the Sun Prairie Museum, one that features monkeys drinking martinis.
Huerta has been part of the Raw Madison, Natural Born Artists group, which had an art event at High Noon Saloon last year.  For the past three years, he has exhibited at the Chippewa Falls Spring Art Show.

Tree of Life/Witness Tree Project
This is the first time Huerta has done an art show with this particular group of artists, and said he is excited to be a part of the show. The current Tree of Life/Witness Tree exhibit is a collaboration of artists using a wide variety of media, including branches, seeds, and even fish bones. It came about when two different groups approached Overture Center about doing a show there, representatives from Overture noted the similar themes and asked if they would be willing to host one show together.
One of the group of artists initially got together thanks to the Linda and Gene Farley Center for Peace, Justice, and Sustainability, a nonprofit housed on 43 acres of farm and woodland. Over the course of a summer, the Farley Center invited artists to come out and work, using biodegradable materials that would be able to sink back into the land. Twenty-five artists came to the center to work on creations. Last year, 10 of the artists from the Farley Center gatherings hosted a show at the Commonwealth Gallery. Huerta attended it, which first sparked his interest in the concept.
Bobbette Rose, who has been part of a second group of like-minded artists, helped curate the Feb. 8 show at Overture. Rose has a passion for the environment not only in her art but also in her personal life. “I think all the artists resonate with the concept of the relationship of nature and human beings…,” said Rose, emphasizing that each carries the theme in their personal work.
Rose has been a key organizer of what has evolved into The Witness Tree Project and Collective, which has been a fluid blend of artists from the two groups as well as  a number of individual artists such as Huerta that were brought into the fold.
“We saw that we were like-minded, with parallel directions,” Rose said of the various artists. All of them “believe that art can be a gateway into discussion and dialogue” about issues that tend to be polarizing in today’s world.
Thanks to funding by the Bradshaw Knight Foundation, there will be six community conversations held this year. The first takes place Sat. March 1 from 3:00 to 5:00 p.m. in the Overture Center Playhouse circle. “The conversation will explore how we intersect with our environment within contemporary culture, “ said Susan Corrado.
Corrado and her husband have been resident staff at the Farley Center since 2011, and have been an integral part in the development of the Tree of Life, a Witness Tree Project exhibit and the evolving collaboration and activities.
“I think the more diverse the participation, the more interesting the conversation will be, so we’re hoping that people with varying interests and backgrounds will want to participate,” Corrado said of the March 1 event and other upcoming activities.
Toward the end of May, the Bee Hive Design Collective will join the artists and lead a community event/discussion about mining and coal issues that Wisconsin faces. The Beehive folks are environmental advocates that use art as a tool of sorts, Rose explained. They will also host an interactive art project/workshop over the weekend, in a Madison area location to be finalized and announced soon.

To learn more about the ensuing community conversations or to serve as a facilitator, contact Bobbette Rose at bobbette@bobbetterose.com For more information, check out http://www.facebook.com/WitnessTreeCommunity