In past years, MadREP’s annual State of the Madison Region Summit and the Urban League’s Workplace Diversity and Leadership Summit were separate events held weeks apart in May. This year, the two Madison powerhouse agencies will have a bigger platform from which to address issues that they both have in common as they host “Advancing Talent, Opportunity & Prosperity: The Madison Region's Economic Development, Diversity & Leadership Summit” May 9 at the Monona Terrace Community and Convention Center.

“At MadREP we always held our own Summit and it was often held within a few days of the Urban League Summit … so for us to be able to bring those two different audiences together for one event, to me, that is a rewarding component of this project,” says Betsy Lundgren, vice president of marketing at MadREP.

The daylong Summit will be a solution-oriented event looking to tackle economic, workforce, and community development issues and will be rooted in ULGM’s efforts to transform the community into the Best in the Midwest for everyone and MadREP’s five-year Advance Now Strategy for economic growth.

“That strategy is broken up into five different goal areas. One of those goals is dedicated to leadership and diversity,” Lundgren tells The Madison Times. “We had a long-standing relationship with the Urban League via [former ULGM CEO and President] Kaleem [Caire] because he actually sat on the strategy committee to help develop that strategy. At MadREP, we realized that a lot of the strategies that we were pursuing through economic development, community development, and workforce development very much connected with the strategies of the Urban League. So the partnership was a natural evolution of recognizing that crossover and identifying that need for collaboration to truly make an impact.”

At the Summit, business and community leaders will focus on economic development, diversity, and leadership.

“We will have a continued focus on workplace diversity and leadership and things that the Urban League has traditionally been focused on but we'll layer on top of that additional components of economic development,” Lundgren says. “We'll also be looking at innovation and entrepreneurship —there will be two breakout sessions dedicated to that. While the topic is on entrepreneurial themes, we will be featuring speakers who represent a broad diversity of backgrounds whether [it be] ethnicity or age or just the industry they represent or whether they represent an urban or a rural community.” 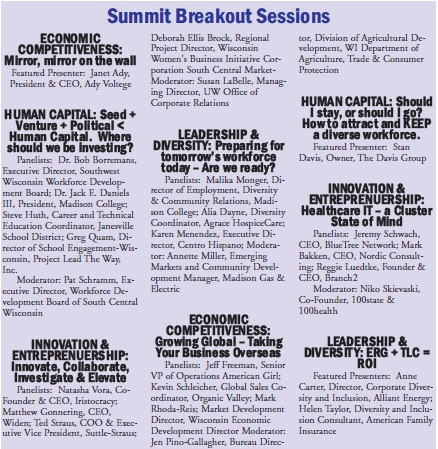 The event will have three main speakers including Ken Salazar, former United States Senator (2005-2009) and United States Secretary of the Interior (2009-2013), who will deliver the afternoon plenary address. He's one of only nine Latino senators to serve in the United States.

“He brings a really interesting background, most notably as the former Secretary of the Interior,” Lundgren says. “Prior to being an elected official, he was also a small business owner and a farmer. He really speaks to a broad range of issues of folks who will be attending this Summit. We're really excited to have him.”
Other speakers will included Joel Kotkin, a renowned author and internationally‐recognized authority on global, economic, political, and social trends and Maria Campbell, who held a 28-year tenure as corporate director of diversity for SC Johnson, and is now a consultant providing executive leadership development, training and lecturing on diversity and inclusion as a key driver for business growth and empowerment.

The Summit is perfectly timed with all of the discussion going on in the greater Madison community right now around race and diversity and changing demographics.

“For me, this partnership that we've developed with the Urban League has been just tremendous and very rewarding,” Lundgren says. “I think with all of the conversations going on in the community with racial disparities and economic development issues, I think it's really important to bring organizations together and give people a forum for a variety of people to sit at the table together and talk and listen.

“I think we've been seeing people embrace diversity in big cities throughout the nation and they are ready to do it here in Madison,” Lundgren adds. “If you think about where we'll be in 10-20 years, there will be no hiding from it.”

The Summit will close with networking and a cocktail reception. Lundgren is hoping for about 400 or 500 people to come to the event. She hopes to attract strong participation from the eight-county region MadREP serves including CEOs, high-level senior management, entrepreneurs, representatives of education and government, and other economic development organizations. She believes that the Summit will provide knowledge and professional development on issues that are poignantly relative to the Madison community at this time.

“I think with the variety of speakers and topics, there will be something there for everybody. I think that the networking with a diverse group of people will be valuable,” she says. “We really want this to be a solution-oriented event so we're not just hearing people talk but we're engaging in dialog and hopefully coming away with new ideas on how to improve our community and our workplaces.

“We are bringing together a broad range of people to really address these issues,” Lundgren adds. “We hope people will be able to see how economic development, workforce development, and community development are so intertwined and how we have to target those issues through collaboration, through a broad cross-section of professions, industries, ages. It's really about bringing the community together to work on the issues that we are facing right now.”