And here’s the kicker: By the time a child enters kindergarten, this language gap may be irreversible.

“When they looked at three types of kids — very poor, working class, and kids with college-educated parents at home, what they found was that the kids in the latter group were exposed to so many more words than the others by age 4,” says Kaleem Caire. “There’s no way that you’re ever going to be able to affect that gap unless you give kids common exposure. That’s the importance of early childhood education.

“But, we also know that you just can’t drop a kid off and pick a kid up at a center; you have to work with the parents, too,” Caire adds.

The Madison Times sat down with Caire to discuss that famous study — the 32-million word gap — and how it relates to the reorganization, rebranding, and re-launching of Child Development Inc. and how Caire plans to help move it to the next level and broaden its reach to once again serve more children in Dane County.

Caire, the former president and CEO of the Urban League of Greater Madison, has big plans for the struggling nonprofit child care center that started in 1965 coinciding with a burst of grassroots energy inspired by President Lyndon B. Johnson’s War on Poverty. But while there once were six CDI locations, there is now only one. Caire became concerned when he found out that one center was in need of a lot of help and was in danger of closing.

“It caught my attention because I grew up right there on Fisher Street and I came here after school,” Caire said of the facility that opened in 1969 that once had a stellar reputation as a racially and ethnically diverse facility that leveled the educational playing field for children from families of limited means. “It used to be a real staple in the community. Middle-class and upper-middle-class people would send their kids here. To hear that it was at that point — I wasn’t surprised because South Madison has declined over time — was disappointing to me. I was like: CDI might be closing? Really?”

Many children of color in low-income families don’t start their learning in accredited childcare centers. That is a big part of the problem. “CDI lost their accreditation level because they weren’t meeting the standards of the city,” Caire says. “They lost some funding. Over time, it had a negative impact on their balance sheet. It put them in a hole.”

The city of Madison provided $34,000 in emergency aid and has been working with the center to regain the city accreditation it had surrendered a few years ago. Over the last 12 months, Caire says, he has seen that there are far too few children of color enrolled in accredited early childhood education centers in Dane County.  This phenomena is significantly contributing to the width and persistence of the racial achievement gap in Madison Metropolitan School District schools.

“My passion has always been with education and I wanted to move forward with this,” Caire says. “So, in April, the CDI board voted me in as a managing consultant to oversee the organization and the rebranding and relaunching of CDI with the expectation that I will become the CEO of CDI sometime within the next month or August.”
For the past few months Caire has been meeting with local experts in curriculum, operations, and fundraising and has been donating his expertise and efforts to the relaunch.
“Essentially, what I’ve been doing is putting all the tools together to restart this thing and we’re going to rename it to One City Early Learning Centers,” Caire says. “It’s going to be totally different from what it has been in terms of quality, expectations, standards, and visibility and —we hope — enrollment. We’ve got to get the enrollment back up.”

The center has the capacity for more than 90 young people but currently have only 38 kids enrolled. “There’s revenue that’s attached to each one of those children that we aren’t getting,” Caire says. “We’re only using 5 out of 8 classrooms here right now. Only one out of six of our offices are staffed. We have a lot of areas of need.

“My goal is to build the enrollment back up and to make it a center where people are once again on a waiting list to get in,” he adds. “It’s going to be a little hard because we also are going to deal with the stigma of south Madison but we are looking to grow.”

Under the latest plan, the 38 children now enrolled in the center will temporarily relocate soon to nearby facilities while CDI’s building undergoes an upgrade, including the installation of a new roof.  The center needs to raise about $275,000 within a matter of months to get the existing building and its operations back on track. 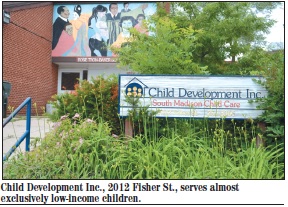 “It’s going to go well beyond refurbishing this place,” Caire says. “We want to have 10 centers around the city. I’d like to have 10 locations in 7 years. Once we get this one going it will be our model and we’ll be able to set up 10 sites. Ten places — if we do it right — will make a huge difference in Madison. We have to do this right.”

Caire says that this is a great opportunity to address these racial achievement gaps at their genesis and put children on the right track to succeed early.

“We want to make sure that our kids turn up to first grade reading, computing, and succeeding in school,” Caire says. “We also want parents to be empowered with the opportunities to help their children with their education. Our core focus will be the children but our secondary focus will be the families. We will partner with a handful of agencies to help us do that whether it’s job training or job promotion. “

Caire’s hope is that while south Madison is currently a “daycare desert,” One City Early Learning Centers will help turn it into a daycare oasis. It’s essential because a child’s success in school depends a lot on learning that takes place before traditional school officially begins in kindergarten.

“We have that whole notion of one city,” Caire says. “It’s truly about this city finally saying for these little kids that you are our responsibility and we’re going to see to it that we give you every chance to succeed.”

CDI will hold two “community visioning sessions” for the public next week, both at Mt. Zion Baptist Church, 2019 Fisher St. They will be from 5:30 to 8:30 p.m. Monday and Tuesday.