“This is not a conference to point figures and to blame people, but we have to acknowledge certain things before we can move on,” says the YWCA Madison’’s Colleen Butler. “People want to move on to action steps so fast, but there is something to learning about our history and knowing the root of our problems before we solve the problems. And if we can't talk about race or white privilege or our history of providing access to opportunity for some at the expense of other groups, we are going to always struggle with finding reasonable solutions. It's a challenge that I've found in Madison where people want to jump to action steps before doing the due diligence of learning.”

Butler is the racial justice director for YWCA Madison, a co-host of the annual White Privilege Conference (WPC) that serves as a yearly opportunity to examine and explore difficult issues related to white privilege, white supremacy, and oppression. Nearly 2,400 people are expected to attend the event that will be held from March 26-29 at the Monona Terrace Community and Convention Center. WPC provides a forum for critical discussions about diversity, multicultural education and leadership, social justice, race/racism, sexual orientation, gender relations, religion, and other systems of privilege/oppression. It tackles racism that is embedded in systems and organizations — structural privilege that has evolved over centuries and that people with good intentions might not even be aware of.

“There will be over 120 different breakout sessions at the event,” Butler says. “The theme of the conference this year has to do with community organizing, strengthening relationships, and working together toward justice. All of the breakout sessions should fall under that umbrella. One thing that I really like about their conferences is that they really do a great job of having their presenters categorize their workshops in terms of beginner, intermediate, and advanced. So, it gives people who are doing work in this area a chance to opt into some more advanced conversations, but it also has space for people where this is new information to them to go into spaces where it is more of a basic level.” 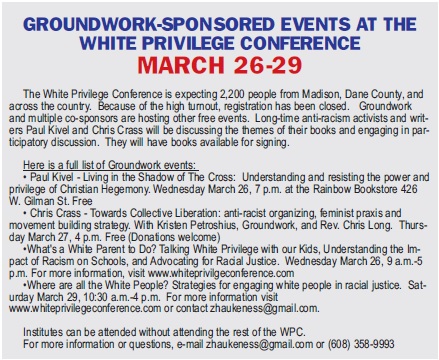 Jacqueline Battalora, professor of sociology and criminal justice at Saint Xavier University, will be the opening keynote speaker. “She's an amazing speaker and what she talks about is the history of white people and the law,” Butler says. “She really looks at United States law since the 1700’s and how it was used to create race.  It's a really fascinating presentation and it's one of those things that really blows your minds [with] all the things you didn't know.”
Eddie Moore Jr., director of diversity at Brooklyn Friends School, a college preparatory school in Brooklyn, N.Y., started the WPC 15 years ago in Iowa. Moore created it with the goal of examining “challenging concepts of privilege and oppression” and offering “solutions and team-building strategies to work toward a more equitable world.”
“It was held in Seattle last year. It's been in La Crosse and Minneapolis, Memphis, Sante Fe. It has strong roots in the midwest,” Butler says.

It is not a conference designed to attack, degrade, or beat up on white folks.

“One of the things that Eddie [Moore Jr.] talks about is that he likes the conference to leave what he calls a 'social justice footprint' and I really feel like we're well-poised for that,” Butler says. “I'm really trying to connect this conference to the work that they YWCA does with our [Racial Justice] Summit coming up next fall.”

The White Privilege Conference coming to Madison is extremely timely given the numerous discussions on racial disparities here triggered by the  Wisconsin Council on Children and Families's Race to Equity report and the buzz from Dr. Alex Gee's Justified Anger campaign. For instance, the report found that 75 percent of Dane County’s black children live in poverty, compared with 5 percent of white children.

“Honestly, I don't think the timing could be much better,” says Butler. “I feel like there has been a huge amount of momentum in the community that started when [the] Race to Equity [report] was released in October and bolstered by the work that Alex Gee has been doing and some of the media attention that has been on the issues. I feel like the profile of this conversation has been raised in communities where it normally has not been a focus.

“I think that this has been a focus in communities of color for a long time. I don't think this is a new conversation,” she adds. “But I think that for a lot of the white community in Madison this is something new — the level of knowledge, interest, and engagement. So, I feel like capitalizing on that by having this conference as part of all of the work that is going on. It's something really positive.”

But it's not something positive for everybody. The conference routinely triggers threatening and ugly e-mails — often from white supremacists.
“We've definitely received a lot of backlash and the national office has received even more. Honestly, a lot of my work normally is battling more subtle forms of racism and being a part of this conference has allowed me to come face-to-face with more overt racism,” Butler says. “It's been very hateful e-mails from very angry people. There have been some white supremacist groups who have been organizing against the conference and against the sponsors for the conference. For people who don't think racism exists, I have proof that I can show you.”

There are other people who may not be approaching the conference with that type of venom but they certainly are confused about the title of the conference. “We do take that as an opportunity to talk to those people about why we call it the White Privilege Conference and what it means and why the YWCA wants to be involved in it,” Butler says. “Ultimately, white privilege is just the other side of racism. Racism is when you are shining the light on the experiences of people of color and white privilege is when you are shining the light on how that reflects on white people. They are the same thing. If our mission is to eliminate racism, we have to acknowledge the flipside of that which is the privilege that comes to white people. The frustration that people have with the terminology is that it seems to imply that everything was given to them — that [white people] just got out of the hospital as babies and people gave us a handful of money and told us everything was going to be good and easy. We all know that that is not true. 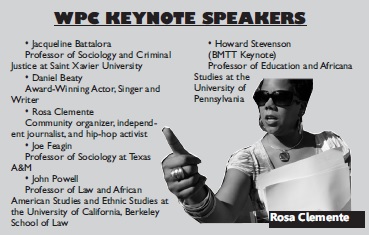 When we're talking about privilege I think that it's important to be clear that we're not saying that you are not going to experience challenges, you're not going to have to work hard, and you're not going to have to be smart and you will have all of the doors wide open for you just because of your whiteness,” she adds. “But we are saying that many doors are more likely to be open to you if you do work hard. If you work hard you might receive different results than if an African American person in Madison, Wisconsin, all works hard.”

The WPC is really a conference for everybody. Well, most everybody.

“It's really not a conference for people who don't agree that there is racism. If you are starting there, there will be nothing useful to you at the conference,” Butler says. “But if you are even open to wanting to learn more or feel like that might be a possibility and you want more information, there are beginner-level tracts. But [the conference] does start from the assumption that everybody there is on the same page and that there is such a thing as white privilege.”

Butler hopes that the WPC will at the very least get people talking about those important conversations around race.

“For us, a goal that has been emerging for the YWCA around our racial justice work — and the White Privilege Conference would be a part of that — is that if people get to a place in Madison where they can recognize where race is a factor in whatever conversation is being made and say it out loud and have a comfort level talking about it, then I feel like we've achieved something huge.

“I know sometimes people get frustrated and feel like we've been talking forever,” Butler continues. “I feel like some people have been talking forever, but a lot of people have not been talking at all.  They don't know how to recognize racial dynamics and they don't feel comfortable talking about it when they do. They don't feel comfortable stepping up when they see things playing out in ways that are inequitable. So I think that's a really important step for Madison that I hope that this conference can contribute to — people's awareness being raised in a way that leads to action.”

A list of free events in the community related to the conference can be found at www.ywcamadison.org/WPCevents.