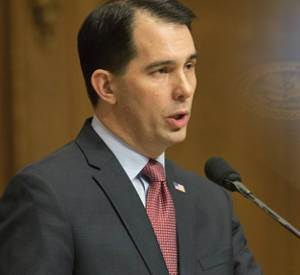 Gov. Scott Walker
On Tuesday February 3 Governor Scott Walker released his budget proposal, a plan that includes a proposed $300 million cut in funding to the UW-System and the installation of a public authority in the place of the UW’s existing governance structure.
Chancellor Rebecca Blank of UW-Madison wrote a blog post on January 27 detailing her appreciation of the state’s proposal to give the UW-System and its universities more autonomy. However, she also expressed concerns with the system’s ability to undergo a major restructuring while simultaneously experiencing a cut of this “magnitude”.
“I appreciate the opportunity for additional flexibility and management efficiencies that a public authority might bring, and would work hard to implement these effectively on our campus.” wrote Blank, “It would be challenging, however, to engage in a major re-organization while also coping with a large budget cut.”
“I believe the proposed cut is too big for UW-Madison and too big for the state of Wisconsin.” wrote Blank in a February 5 blog post. According to Blank the expected total annual cut for UW-Madison would be $86 million.
“Never in its 160-year history has the university faced cuts of this magnitude.” wrote Blank, “If these reductions take effect as proposed, they will trigger employee layoffs and cuts to programs around the campus.”
Senator Sheila Harsdorf, the Majority Caucus Chair, said in a statement on her website, “As a longtime advocate for flexibility and accountability measures for the UW-System, I believe these reforms may be an opportunity to provide campuses and the system with the tools needed to ensure student opportunities and success as we focus on meeting our states workforce needs.”
The reforms Harsdorf spoke of would include a $300 million dollar cut to the UW-System over the next two years, as well as turning the UW into a public authority, which would entail a transfer of powers and laws from the state government to a Board of Regents. Examples of current state statutes that would become board of regent’s policy include the UW-Systems tradition of shared governance and tenure. 16 of the 18 members of the Board of Regents have been appointed by Scott Walker.
“The time-tested values of shared governance and tenure have made us strong and competitive. President Cross and Regent leadership have indicated that these values will continue to be honored through board policy,” wrote Chancellor Blank on January 27.
In a budget update email sent by UW-Milwaukee Chancellor Mark Mone, the chancellor expressed clear reservations about the changes to the UW-System within Gov. Walker’s budget proposal.
“If the budget reductions are approved, it will impact our ability to serve students and support the important research that benefits communities and businesses throughout the region,” said Mone.
Over 80 percent of UWM alumni work and live within the state, and the total annual economic impact of UW-Milwaukee is $1.5 billion dollars regionally which results in almost 15,000 jobs, according to Mone.
Mone said, “While the proposed budget cuts will be felt immediately the proposed benefits of flexibility and autonomy will likely take years to realize.”
Mone said that UWM’s share of the cuts is expected to be $40 million dollars over the next two years. He referred to it as, “The biggest budget cut in our history.”
Chancellor Mone began an advocacy campaign February 4, aimed at engaging lawmakers in a discussion about the budget cuts and proposed changes to the UW-System. According to UW-Milwaukee vice chancellor of University Relations and Communications Tom Luljak, Mone has already met with six Wisconsin legislators.
In a press release from Republican Speaker of the State Assembly Robin Vos, he echoed calls from other Republican lawmakers to grant flexibility to the UW-system, while also displaying concerns about the size of the cut they currently face.
“I am still reviewing the governor’s budget proposal. As a former regent, I have concerns about a cut of this magnitude without granting flexibilities to the UW-System.” said Vos.
“This is a decision not to be taken lightly.” said Vos, “ Legislators need to determine the best way to give greater freedom to the UW-System knowing the state will continue to give the system hundreds of millions of dollars in taxpayer support.”
Representative Leon Young of Milwaukee said he was “Totally surprised and shocked” regarding his initial reaction to Governor Walker’s budget proposal.
Young expressed deep concerns about the impact a budget cut of this proportion may have on UW students and faculty. Specifically he cited concern over faculty layoffs and increased class sizes that may accompany a budget cut such as this. Young believes that limitations on university programs and the availability of positions within those programs may extend the amount of time it takes Wisconsin students to graduate.
Gov. Walker said in a press release, ““We encourage a vigorous debate over the idea of an authority to govern the University of Wisconsin system or the status quo, as well as a debate about what is the real amount of savings that can be generated by an authority, which we believe is worth $150 million a year.”
Rep. Young said, the governor’s office often makes statements encouraging discussion. However, proposals from Democratic lawmakers are rarely heeded in a final bill.