Rahim Islam
Where you start matters! For the Black community in America the economic start has been so disproportionate and bankrupting that so called “ghettos” and the Black community go hand-in-hand. This has created an accepted stigma of inferiority about Black people and Black neighborhoods.
Let’s do the math.
During slavery, the majority of Blacks lived in inferior and dilapidated housing settlements on plantations except those that lived in the slave owner’s house. These living and working conditions, coupled with the type of food that Blacks were allowed to eat, were absolutely inhumane and unbearable – this was the lifestyle that Black children, men, women, and families were accustomed to for generation after generation. Slavery was such a harsh and terrible way of life for Black people – their sole purpose for existence was production. Their duties were raising, planting and cultivation of crops, clearing land, burning underbrush, rolling logs, splitting rails, carrying water, mending fences, spreading fertilizer, and breaking soil. Working from sunrise to sunset was merely and analogy for slave labor, they often worked before sunrise and considerably past sunset. The daily routine included caring for the house, the yard and gardens, cooking meals, caring for the children of their slave owner and droving carriages.
Housing for Black people was an unintended consequence and expense for the slave owners. Restated, the only concern for housing for Blacks existed so that during the harsh winters, they didn’t lose too many slaves – very little went into housing for slaves. Housing for Blacks varied from plantation to plantation but most slave quarters were generally arranged in avenues or streets and located behind the mansion or ‘Big House.’ They were strategically placed to give the owner or overseer a clear view of the slaves, so their activities could be easily monitored. Typically, slave housing consisted of hand-hewn one-room log cabins measuring 20 by 20 square feet with brick end chimneys. Some cabins were 18 by 36 square feet. Each cabin had log flooring and sometimes a loft where children slept. Each cabin housed an average of 8-10 individuals. 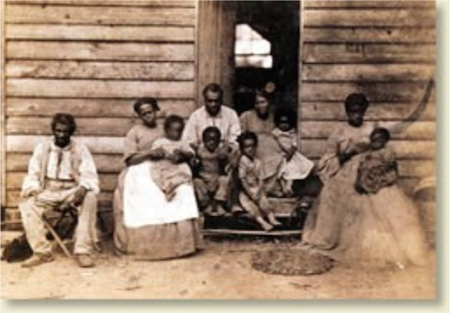 This all took place while Blacks lived on extremely wealthy plantations but stayed in uninhabitable housing. What was the psychological impact on Blacks to live in squalor while the White plantation owner lived in absolute wealth and luxury only a few yards away? White slave owners lived in beautiful homes and stable neighborhoods and held immense wealth as the result of slavery and they lived a billion times better than Blacks (this was the first “ghettos”).
After emancipation in the early 1860’s, Blacks transitioned from the plantations to similar housing and neighborhoods – new ghettos. This is the start for Blacks but not for Whites. For Whites, their start begins nearly 300 years earlier. Why do I use emancipation as the starting measurement (baseline) for Blacks? I used this as a start because this is the first period when Blacks were supposedly to be free – nothing could be further from the truth. At that time Blacks didn’t own anything and had no asset or wealth of any kind. Without government help, which was very limited during the “reconstruction period,” how were Blacks supposed to invest in themselves? Without capital, how were Blacks supposed to purchase land and build houses that were better than the houses they lived in during slavery? After slavery, Blacks owned 1⁄2 1% of the nation’s wealth and this statistic remains the same today. In addition to the capital disparities, two other crippling conditions emerged as a result of slavery and both are in full force today: inferior housing and a dependency on the government.
We must examine how Blacks lived coming out of slavery in 1865 in order to understand the dilemma Blacks face today with urban renewal – Where you start matters! If you take into consideration this reality and the many strides that Blacks have made in America in spite of having their hands tied and literally in an economic straightjacket, you must acknowledge the greatness of Black people. Coming out of slavery, Blacks were able to become sharecroppers, farmers, business owners and create competitive neighborhoods in the South. The White hatred of Blacks and the terrorism of the KKK against Black people with no legal protection, placed Blacks in very extreme levels of fear. Lynching of Black men became commonplace and the destruction of Black property also became the norm.
With Jim Crow Laws in place in the south (a system that gave Blacks no protection or the ability to control their own destiny) added to the emerging industrial revolution and job opportunities in northern cities, Blacks relocated to cities like Chicago, New York City, Philadelphia, Detroit, Washington DC, Boston (1890 – 1950). Upon moving north most Blacks resided in inferior housing and economically challenged neighborhoods (ghettos). Today, there are nearly 45 million Black people in America and approximately 75% of them live in 30 urban cities. Because of economics, Blacks didn’t move into manicured and well-groomed neighborhoods; they lived in areas that resembled the same surroundings during slavery (impoverished settlements on plantations).
It’s very easy to look at today’s urban conditions and forget how we got here – that’s so easy and convenient. It goes back to blaming the victim and not the culprit. It’s never been a bed of roses for Black people in America – Blacks have been on defense for nearly 400 years since being in this country. If we use emancipation as the baseline, we can track the progress of Black people over the past 150 years. For the most part, Blacks have worked hard to secure housing and education and live in good neighborhoods but it’s been very illusive. Blacks carry a stigma that is also a legacy of slavery. For many White people this stigma has promoted a fear of Blacks moving in their neighborhood and after legal segregation (1960’s) when Blacks managed to move into all White neighborhoods, there was massive White flight (in a matter of a few years complete White neighborhoods had become Black). White flight has happened since emancipation – this isn’t some new phenomenon.
For many Black people this stigma has helped to create a deep-rooted Black “inferiority” about themselves and their neighborhoods. This stigma has also produced a pent-up demand to jettison (Black flight) at the first possibility. Since our existence, Blacks have compared good with White people this is called a euro-centered perspective.

Starting on the plantation living side by side (squalor next to extreme levels of wealth), many Blacks have viewed their own as being bad and inferior and Whites as good and superior.  The euro-centered mindset is perfectly find for White people but extremely crippling for Black people – this is even more troubling when Black people don’t know they’re own culture and history. Even our most learned scholars don’t have the skilled sensibilities or mental thinking to “do for self.”  I’ve rarely heard that we as Black people should stay and create the neighborhoods we envisioned and need – it’s always been about getting out of the “ghetto.”  This combination has made America more segregated today than it was before so-called integration.
There are very few traditional poor and disenfranchised Black neighborhoods (these are the neighborhoods that have been designated blighted) that have been physically redeveloped while at the same time allowing those residents who have lived there for generations to be able to reap the benefits of a “renew” community specifically enjoying the wealth of appreciated real estate. Why?  The answer has its roots in where you start.  Many Black residents have been renters for generations.  This represents a real knowledge and financial gap that I say is a legacy of slavery. Over the years, the housing stock continues to decline from good to fair to poor and ultimately you begin to have high levels of vacant properties that after years of being uninhabited fall down or must be torn down. These neighborhoods are on the trajectory to reach economic bottom (this doesn’t even speak to the families and children who grow up in these type of environments and what the psychological damage is being done to them).
This neighborhood decline becomes permanent and is exacerbated by the high cost of construction which exceeds the appraised values. Add to that the “ghetto” stigma which fails to stimulate the demand of the Black buyers who could afford to pay “market” rates needed to justify development costs are just not available (most Blacks with some economic capacity have moved to either White neighborhoods or recently abandoned White neighborhoods). The undesired outcomes will continue until Blacks are able to get in front of the real estate curve versus being behind the curve – investing in the Black neighborhoods versus relocating to suburbs (another legacy of slavery). While most experts believe that good communities are a “mix” of different incomes (this was common in Black communities during segregation) because of our inability to attract Blacks to invest, the term for many mixed neighborhoods has come to mean high income White people and poor and low income Black people.
The combination of poor education facilities, high levels of crime and violence, lack of commercial amenities and a whole host of other socio-economic issues make these neighborhoods nearly impossible to correct. Current public policies aren’t nearly effective enough, especially to attract mid-to-high incomeBlack people (that’s if they would even want to come). Many of the public policies are short sighted, ineffective, and motivated by transactional politics. Even when not motivated politically, current public policy tries to optimize scarce dollars and spread the development opportunities around and the results are: 1) the inability to develop “sustained” and “place based” development strategies that will create new places over a period of several years that might possibly jump-start a stagnant real estate market; and/or 2) any/all benefits are relegated to the lowest of income residents which in some cases produces even poorer communities with a large concentration of poorer people.
This phenomenon is only interrupted when these neighborhoods have defensible and/or strong economic borders (i.e. near downtowns, neighborhood parks, education and medical institutions, rivers and lakes, etc.). Sometimes even these neighborhoods need public support to address some of the real concentrated blight (i.e. public housing sites) and once removed you see real estate values skyrocket and the massive removal of long term poor Black residents that are replaced with high income White residents – this is classic gentrification and urban renewal becomes urban removal.
The market forces are brutal and while they are color blind, we all know which sides of the coin that Black and White people reside (Whites have all of the capital and Blacks have very little). Now, with public support and treatment of the hardest blight that the market couldn’t undertake, coupled with: a large ownerless neighborhood (vacancy and renters); a neighborhood that is adjacent to massive economic assets; a national trend and renewed value for urban living (empty nesters moving from the suburbs); unlimited access to wealth and capital; multi-year tax abatements; low mortgage rates, like magic the real estate “ceiling” is lifted and real estate values appreciate exponentially and initiates an economic tsunami that most people of color are unable to gain any traction to beat.  The absolute opposite exists for most Blacks who live in these neighborhoods (the market forces them out).
In addition to addressing several of the key issues (i.e. education, public safety) so that traditional Black communities can compete, they must be organized and both a supply side and a demand side strategy must be implemented – we call it the Universal Plan.
Continue in Urban Renewal Is About Urban Removal: Part 2 – The Tale of Two Cities
Rahim Islam is a National Speaker and Writer, Convener of Philadelphia Community of Leaders, and President/CEO of Universal Companies, a community development and education management company headquartered in Philadelphia, PA. Follow Rahim Islam on Facebook (Rahim Islam) and Twitter (@RahimIslamUC).