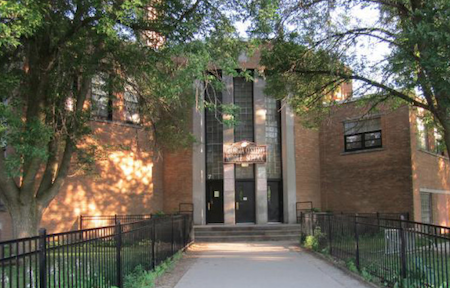 In response to the recent shooting of young Tony Robinson earlier this year, students in the Madison area are finding a safe haven to share their voices and emotions without stepping outside the walls of their schools.
In an announcement at a news conference last week, Dane County District Attorney Ismael Ozanne said the officer involved in the shooting of 19-year-old Robinson in Madison will not face criminal charges.
With 48-hour notice given to the Madison community prior to this decision, school districts in the area had time to prepare for the reaction from students and families.
Some schools sent out emails to families and created toolkits for teachers. Given last year’s Ferguson shooting, schools like Georgia O’Keeffe Middle School on the city’s East Side already had a plan in place to help students.
“It’s been really helpful to study [what happened] in Ferguson in an academic way,” said Jenny Apfelbach, a student teacher at O’Keeffe. “Now when it’s an emotionally charged situation, it’s great that the students had a background. This round, it’s about dealing with our emotions rather than in a more academic sense.”
In both Madison and Sun Prairie, where Robinson attended high school, the school districts sent out emails to families prior to Ozanne’s decision.
Dr. Tim Culver, superintendent of the Sun Prairie school district, encouraged families to come together to discuss the matter and protests.
“We encourage you to talk with your children about staying safe if they choose to participate in any events during this time,” said Culver in an email to parents. “We also think it’s important for you to talk with your children about both their rights and responsibilities if they choose to participate in planned or unplanned events.”
Although schools didn’t explicitly discourage student activism following the decision, many schools made it a priority to provide resources and support.
At O’Keeffe Middle School, Tuesday’s decision hit close to home as Robinson was a student there. Many of the students and their families were close to Robinson.
This week, the middle school designated a room as a safe place for students to watch Ozanne’s decision on TV. Students also created lists of people in their lives they feel safe talking to.
The reaction from the school district in response to the months following the shooting made this week’s decision easier to handle, said Apfelbach.
Immediately following the shooting, Madison Metropolitan School District Superintendent Jennifer Cheatham provided teachers with classroom toolkits. These toolkits encouraged classroom discussions where students were free to express themselves in a safe space, said Apfelbach. Despite their young age, students were curious and engaged in the political atmosphere surrounding recent events.
“I’m constantly shocked with how mature these kids are,” said Apfelbach. “It’s refreshing to see these young people care.”
This heightened interest from students in Wisconsin parallels the student activism following the shooting of Michael Brown in Ferguson, Mo. last year.
Schools in the Ferguson area made similar efforts to contact families of students and provided counseling resources.
“As time wore on, there was immediate need for [community wide] support and particularly at the secondary level, students became involved as student groups sprung up,” said Jana Shortt, director of communications and marketing for the Ferguson-Florissant School District.
In response to the decision not to charge officers involved in the Brown shooting, students participated in monthly meetings, which provided open and insightful discussion on issues of race and culture.
Partnering with a local arts collective called Craft Alliance Center of Art + Design, students at two high schools in the Ferguson-Florissant School District produced an art project titled “CommuniTea” to promote healing and looking toward the future.
“If you look at the movements [around the country], it’s very much being driven by, in a large part, young people,” explained Shortt. “They’re using social media to organize events … [And it’s] our job to make sure that it’s done in a meaningful, productive way and to provide historical context.”