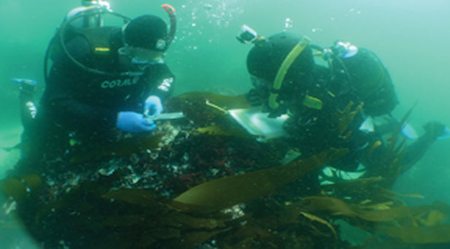 Sadijah Wallace is Special to the NNPA from Howard University News Service.
WASHINGTON, D.C. – It was the find that Lonnie Bunch III and the new National Museum of African American History and Culture had searched for so desperately – the remains of one of the hundreds of ships that were used to transport millions of Africans into slavery in the Western Hemisphere.
The sunken slave ship, São José-Paquete de Africa, was found late last month off the coast of Cape Town, South Africa. According to Bunch, director of the museum, the Portuguese ship sank in 1794 on its way to Brazil while carrying more than 400 enslaved Africans from Mozambique. It is estimated about half of those on board perished, and the other remaining were auctioned off into slavery.
The remains were discovered and later brought to Iziko Museums of South Africa. The museum, part of the Smithsonian Institute, will be receiving a permanent loan for the item and its remaining content.
The objects recovered from the ship include iron ballasts used to weigh the ship down and copper fastenings that held the structure of the ship together.
Bunch said in a statement that the ship “represents one of the earliest attempts to bring East Africans into the trans-Atlantic slave trade.”
“This discovery is significant because there has never been archaeological documentation of a vessel that foundered and was lost while carrying a cargo of enslaved persons,” he said.
The remains of the slave ship are the latest addition to the museum, which is scheduled to open 2016. The museum, which will be the 19th in the Smithsonian collection of museums, has collected a wide array of African-American history memorabilia, ranging from the trumpet of legendary jazz musician Louis Armstrong, to the boxing headgear of former heavyweight champion and human rights icon Muhammad Ali.
Currently, the Smithsonian is offering a preview of what is to come at the National Museum of American History.
Selections from the permanent collection are displayed in a temporary exhibition.
“The exhibition showcases the personal and intimate narratives of various families, organizations and individuals spanning the Revolutionary era to the present. It also offers an overall introduction to the new museum and a preview of its rich collection,” according to the museum’s site.
Included in the display are James Brown’s organ, rock and roll pioneer Chuck Berry’s Cadillac, abolitionist Harriet Tub-man’s hymn book, civil rights activist Rosa Parks’ dress, revolutionary slave leader Nat Turner’s Bible, “King of Pop” Michael Jackson’s fedora and an airplane used by the World War II Tuskegee Airmen.
The items are symbols of transition from slavery to freedom, to civil rights, to woman’s rights. In efforts to encompass every aspect of African Americans since their initial arrival on slave ships from Africa in 1619, the museum spans every era in history—even the stories still unfolding, according of museum officials.
The stories of the deaths of unarmed Black men by police in places like Ferguson, Mo., and Baltimore and the unrest are being collected by the museum.
Curators have collected a gas mask worn in Ferguson and a hoodie worn during the protests following the death of Trayvon Martin, an unarmed Black teenager slain by a white security guard in Florida.
Sadijah Wallace is Special to the NNPA from Howard University News Service.