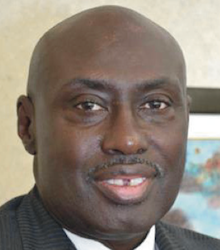 CEO of Milwaukee’s Social Development Commission (SDC), George Hinton.
After recent shootings, Police Chief Edward Flynn stated Milwaukee has the fourth highest murder rates of the nation.
Given this statistic, Milwaukee’s Social Development Commission (SDC) strives to reach out to the poor to achieve their mission of “empowering Milwaukee County residents with resources to move beyond poverty.”
The SDC provided services to 80,000 Milwaukee residents in 2014, but they were only able to serve 84 out of 200 applicants of their summer school program.
Their energy assistance program is also at risk of being eliminated due to two other non-profit organizations competing for it on the RFP proposal.
“The SDC needs more grant money so we can provide interventions for people to move forward in life,” said executive director George Hinton.
The SDC is a community action agency providing over 20 free services to low-income individuals, including weatherization, energy assistance, HSED and GED programs, and job training.
The SDC has arms all over the country.
There are 18 community action agencies in Wisconsin, with the SDC being the largest and only one in the metropolitan area.
“We aren’t a non-profit organization, but rather a quasi-government agency. We’re not government employees,” said Hinton, who has been the executive director since 2013. Hinton, former president of Aurora Sinai in downtown Milwaukee, ironically dropped out of high school, but went to the Marine Corps and attended UW-Milwaukee for his business degree. He believes providing people with experience is key to getting them beyond poverty.
“We need tell people it is fine to fail, but we can still succeed,” he said. Diva Mason-Duprie, 22, is one individual who benefited from the SDC’s 503 HSED program, Workforce Investment Act and the Earn and Learn program. “I dropped out of school at 17 after my father’s death,” said Mason-Duprie.
“Three years later, I decided my life was at a standstill and I had to change.”
Mason-Duprie then earned her HSED over 15 weeks, while providing office assistance for the SDC’s youth advisor Tiffany Pearson.
“Tiffany made sure I finished my homework. She encouraged me along with the rest of the staff,” she said.
“No one cared at my former high school, plus the small classes make it easier to ask for help.”
Once Mason-Duprie finished her HSED, she participated in the WIA, an SDC program that collaborates with the Milwaukee Workforce Investment Board and Mayor Tom Barret.
Through this program, she cooked at State Fair and finally discovered her calling.
“I’m going to MATC for culinary arts and hope to open my own restaurant.” Patrice Harris, the new director of community relations and marketing of the SDC, was amazed watching the GED/HSED program graduation this past May.
“I saw both young adults and people in their fifties graduating,” she said. “They were all so happy and emotional to be holding that diploma.”
Another key aspect Hinton wants to spread awareness on is the new “work for Foodshare law” that was passed recently.
The law requires that certain FoodShare recipients enroll for ResCare job training programs in order to keep their FoodShare benefits.
“Even if the county sends letters out regarding the law, they may have the wrong address,” Hinton said.
“And not everyone in poverty reads or listens to the news media that discusses it.”
He added that he also wants to form relationships with the media so they can spread more awareness on issues relating to those in poverty such as the FoodShare law.
“We’re recovering from a time where the SDC was in the news for the wrong reasons.
We’ve made progress since then,” he said.
“Our image is hijacked and so are many communities, based on media.”
The SDC is located at 4041 N. Richards Ave in Milwaukee.
Visit cr-sdc.org for more information.