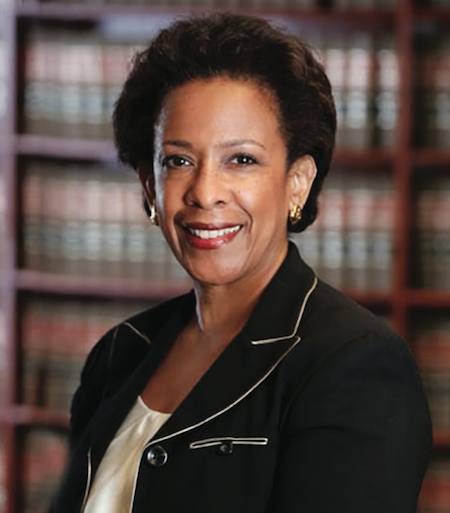  Loretta E. Lynch
Last week, Loretta E. Lynch made history by becoming the 83rd U.S. Attorney General after a lengthy and protracted U.S. Senate confirmation.
As the first African-American woman, second African-American and second woman to ever hold the position, she will have to navigate allegations of race-based police killings as well as cybercrimes, immigration, terrorist threats, voting rights and much more, all while under the scrutiny of a Republican-controlled Congress and conservative-led U.S. Supreme Court.
Earlier this year as part of her confirmation, Lynch was questioned about her intentions should she become U.S. Attorney General. However, it was Eric Holder, not Lynch, at the forefront of members of the Republican-controlled Senate Judiciary Committee. At one point, questioning of Lynch was more a criticism of Holder, resigning after six contentious years, than concerns about Lynch’s qualifications. Eric Holder, 56, is an outspoken champion of racial justice, immigration, same-sex marriage, and reforms on Wall Street. Holder, who has described himself as President Barack Obama’s “wing-man,”
has used the attorney general’s office to address social justice issues, such as the police killing of unarmed civilians that ignited protests nationwide and brought America international rebukes.
Lynch now inherits Holder’s docket and controversy. At a hearing, Senator Ted Cruz (R-TX), now a candidate for President, peppered Lynch about her position on immigration, due to Holder’s support of President Obama’s Dream Act, which gives amnesty to illegal immigrants. Lynch agrees with the amnesty and refused to back down to Sen. Cruz.
Also at that hearing, senators questioned whether Lynch answered that believed waterboarding was torture but does not support the legalization of marijuana. She also believes the National Security Agency should continue their program of suspected terrorist surveillance.
In her opening statement, Lynch, 55, said, “protecting the American people from terrorism must be the primary mission of today’s Department of Justice.”
“I see a combination of steel and velvet,” remarked Sen. Diane Feinstein (D-CA), describing Lynch at that January hearing.
Lynch is diminutive, standing about five feet tall. Her southern graciousness — she is a native of Greensboro, NC — combined with a determined spirit will certainly be beneficial in the Capitol Hill maelstrom.
After graduating from Harvard College and Harvard Law School, Lynch worked in private practice as a partner in a major law firm, but then returned to public service.
She entered the U.S. attorney’s office in New York and climbed the ranks in the Eastern District of New York and was twice confirmed by the U.S. Senate to be U.S. Attorney for the Eastern District, which covers Queens, Brooklyn, Staten Island and Long Island. Although she is responsible for such cases the 2014 indictment of Republican Michael Grimm, the Staten Island Congressman, who later resigned, Lynch has remained out of the public eye.
Lynch has served as a special prosecutor at the International Criminal Tribunal for Rwanda, prosecuting their genocide cases. In 1999, she prosecuted police officers responsible for the brutal assault of Abner Louima, a Haitian who was arrested outside a Brooklyn nightclub in 1997.
The Senate Judiciary Committee approved her nomination on February 26. But, the process stalled again. It has taken over five months to bring Lynch’s nomination to the Senate floor for a full vote.
Pamela Meanes, president of the National Bar Association, drafted a ‘cease and desist’ order to Senate Majority Leader Mitch McConnell, who is blamed for the delay. President Obama called this historic delay “embarrassing.” But, now, with less than two years left in the Obama Administration, Lynch has little time for new initiatives. And, extending the legacy of Eric Holder, she will certainly see further opposition from Republicans.
Differentiating herself from Holder was a key point made by Republicans and some Democratic Senators. When asked if she was just like Eric Holder, Lynch responded, “I am not Eric Holder.
I am Loretta Lynch.”
Now that she has entered the national stage, America will soon find out how Attorney General Loretta Lynch will address the nation’s diverse concerns.
Gloria J. Browne-Marshall, an associate professor of constitutional law at John Jay College, is a writer and legal correspondent covering the U.S. Supreme Court, the United Nations and major legal issues.