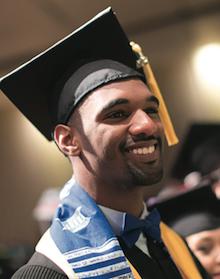 Dantrell Cotton at his UW graduation last year
Graduation rates for college students of color have been on the rise in Madison in recent years.
According to University of Wisconsin-Madison officials, minority students have comprised nearly 10 percent of undergraduate classes over the past five years. In addition, non-white freshmen at the university have increased over the last decade from 492 students in 2004 to 684 students in 2013.
“Research shows that as with anything in life, a strong start is the best indicator for a strong finish in college,” said Patrick Sims, the Interim Vice Provost for Diversity and Climate at the UW.
According to Sims, UW precollege programs are structured around starting strong. For example, the Green Zone program helps students to establish themselves academically and complete their degrees in a timely fashion by helping students achieve a baseline number of credits by the end of their sophomore year.
“In the longer run, we’re now also seeing students who are better prepared to tackle graduate school and pursue advanced degrees,” he said.
Overall, the six-year graduation rate for targeted minority students at UW-Madison has risen from 67.7 percent in 2010 to 72.8 percent in 2014.
Many diverse UW graduates are also the first in their families to earn a college degree.
“That is the life-changing evidence that we’re making a difference and doing the right thing,” said Assistant Vice Chancellor Ruby Paredes, who has worked on campus diversity for more than 25 years.
Numbers for Madison College are similarly increasing with diverse students constituting 22 percent of 2015 undergraduates compared to only 14.5 percent in 2011, not including unknown students.
According to Keith Cornille, Madison College’s Vice President of Student Development, there are many programs that offer support for minority students. One program is the Student of Color Scholar Program, a mentorship program that brings primarily first-generation students of color together with leaders who provide them with guidance.
Other programs at Madison College include the WiscAMP Scholars Program, which supports underrepresented minority students who plan to transfer from Madison College to pursue degrees in science, technology, engineering or mathematics at four-year universities, and the AVID/TOPS College Program, which helps high school students in the Madison Metropolitan School District prepare for college.
Last year, UW-Madison standout graduate Dantrell Cotton obtained degrees in Community & Environmental Sociology as well as Environmental Sociology. During his undergraduate years, Cotton served as the vice president of Minorities in Agriculture, Natural Resources and Related Sciences, the president of the Kappa Rho chapter of Phi Beta Sigma Fraternity, Inc., and was a diversity coordinator with university housing, in addition to being a part of other campus activities.
He even had the opportunity to speak as a panelist about civic participation and democracy for college students at the White House in 2012.
Now, he’s co-leading a course on justice and sustainability at the Nelson Institute for Environmental Students at UW-Madison and is studying equitable food access and the intersections of race and culture in the Environment and Resources Masters Program.
“College has equipped me to be a confident speaker, leader and activist,” said Cotton. “I learned how to advocate and truly use my voice as a beacon of hope. I have learned how to make my degree more than just a diploma on the wall. I’ve learned that it is vital to take a step back and ask ‘how can I share this with the community, with the oppressed, with those who are in need of resources?’”
Being a student of color pushed Cotton to be vigilant at all times. He always had to find a balance between advocating for himself while maintaining his credibility academically. He found that being a student of color invigorated a sense of pride for his culture and history.
Cotton urges other students of color to build a strong support system.
“We are often so busy and pressed for time that we internalize our pain, fatigue and stress,” he said. “There are support groups, organizations and a host of resources to help you continue to be your best self and sustain your mission to shine as bright as you can.”
Other standout students of color will be graduating this month from UW-Madison, such as Bao Moua, an Asian American woman with a degree in social welfare and certificate in gender and women’s studies, and Arturo Diaz, a Latino with a degree in Community and Nonprofit Leadership and a certificate in Chicano Latino Studies.
Among her many other accomplishments, Moua is responsible for co-founding the student organization Nian Laes Niana Hluas: Hmong Sisterhood, a group dedicated to helping women cultivate their personal, professional and academic development. Next year, she will be moving to Los Angeles for a job as a project manager.
College has helped Moua to discover her sense of identity as a minority individual.
“One piece of advice I have is to not say no to yourself,” she said. “These students have more power than they know and they should use it to do what they love. Don’t doubt yourself.”
Diaz has been involved with the Associated Students of Madison at the UW throughout his five years on campus. He will be the first in his family to obtain a Bachelor’s degree and he’ll be graduating with the honor of having won the Campus Legacy award through the Multicultural Student Center.
“I will always make sure I have the lens of a social justice advocate in any work I do,” said Diaz.
He advises students of color to seek out support services and get involved with organizations similar to their values and goals.
“While this journey is hard and long, we can overcome and finish with that degree in hand,” he said.