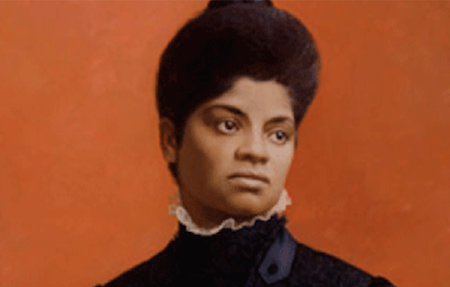 Ida B. Wells
Ida B. Wells was a journalist, suffragette, and crusader for justice in the face of tyranny. She was the daughter of former slaves, and became one of the most prominent activists in America’s anti-lynching movement. Wells helped establish civil rights organizations all over the country, and even England.
Ida B. Wells was born in Holly Spring, Mississippi in 1862 to Jim and Lizzie wells. She was the oldest of their eight children. Her parents, both former slaves, were politically active during the reconstruction years of the south. Her father Jim Wells, a member of the Freedman’s Aid Society, eventually went on to help found Shaw University or what is now Rust College, in 1866. Wells received most of her education at Shaw University, until 1878 when a yellow fever outbreak took the lives of both her parents and a sibling. At sixteen Wells, now having to be the leader and caretaker of her family convinced an Administrator at a nearby school she was eighteen years old in order to secure herself a position as a teacher. Wells moved to Memphis in 1883, where she continued her education at Fisk University and worked as a teacher in a nearby school.
In 1884, Wells famously refused to give up her first class seat on a train. The train conductor tried to forcibly remove her and send her to the black car. Wells refused, and bit the hand of the conductor. She was eventually thrown off the train. After the incident she filed a lawsuit against the railroad company in which she was awarded $500. Unfortunately, the decision was later overturned by the Tennessee Supreme Court. It should be noted that this was twelve years before segregation was constitutionalized by the Plessy v. Ferguson Supreme Court ruling, which established the “separate but equal” idiom.
This event was a catalytic moment in Wells life. Following the outcome of her lawsuit, Wells began writing pamphlets weighing in on political issues and injustice for the black community. In 1889 she became a co-owner and editor of the Memphis Newspaper the Free Speech and Headlight .
In 1892, Wells friend Tom Moss and two of his business partners were brutally murdered. The men were all owners of a black grocery store that began to compete with a white owned grocery store in the same neighborhood; because of this a group of white men attacked the three men and vandalized their store. During the altercation Moss and his men shot some of the white attackers. For this they were maliciously lynched by a white mob.
After this terrible incident an infuriated Wells began traveling the south compiling a record of lynchings. She then wrote editorials detailing the atrocities. Her writings angered many white people in the south, and her office was eventually stormed and destroyed. Luckily, Wells was traveling to New York at the time.
While in New York, Wells wrote a lynching report for a publication called the New York age. In 1894 she published the Red Record, which was a book of tabulated statistics and causes of lynching in the United States. Wells helped establish the London Anti-Lynching Committee in 1893. During that time Wells also began to become very active within the American women’s suffrage movement.
In 1898, Wells brought her anti-lynching campaign to Washington D.C, where she led a protest to the White House and called for reforms to lynching laws from President William McKinley. Wells formed the National Association of Colored Women in 1896, to advocate for racial equality and social justice. Wells also went on to work with civil rights organizations such as the National Equal Rights League. She was also a founding member of the National Association for the Advancement of Colored people or the NAACP.
Wells led a life-long crusade for equality and social justice. She even ran for the Illinois state senate in 1930, however she lost to the incumbent after her campaign began to suffer due to her failing health. Ida B. Wells passed away in March, 1931. She left behind a legacy of social activism and fervent advocacy for civil rights to inspire generations to come.
“I felt that one had better die fighting against prejudice, than to die like a dog or a rat in a trap.” – Ida B. Wells.