Chavez-Hemaidan grew up in Cameron Park, Texas, an area just outside of Brownsville, known as one of the poorest communities in the United States. “When I was growing up there weren't any concrete roads. It was all dirt roads. My little city was a food desert where one of the closest grocery stores was 2 miles away,” Chavez-Hemaidan tells The Madison Times in an interview at Madison College. “But most of the people didn't have cars. The city bus didn't even go into the little city; you had to walk out to meet it and ride all the way down to the grocery store and haul your groceries back.”

Chavez-Hemaidan remembers being 7 or 8 years old and carrying huge loads of canned goods with her little brothers and mom for long distances. “There was no sewage service; most people had outhouses,” she remembers. “Showers outside were not a big deal because most people didn't have water service in their home. I never really had indoor plumbing. It's a whole different world.”

Cameron Park was mostly Hispanic, and, according to Chavez-Hemaidan, mostly undocumented immigrants. “The joke was that if you had a home in Cameron Park with indoor plumbing, your parents were drug dealers,” Chavez-Hemaidan remembers. “I had friends who had parents who were drug dealers. I saw people smuggled across the border and [living] in somebody's back shack. Fifty to sixty people at my friend's house was normal because that is what their parents did for a living. They smuggled people into the states. I've seen it. It's horrible and it's traumatic. I was little. I will never forget it.

“It was unusual circumstances when I grew up, but it really made me appreciate what I have now,” she adds. “It made me realize that if I lost everything, that I'd be OK. You can live very happily with very little.  As a kid, I was very, very happy. And I had nothing.”

When she had nothing, books and libraries were always Chavez-Hemaidan's best friends. “I didn't have Disney Channel; school was a source of entertainment for me,” she says.

When she was 14, her family moved to Chicago in hopes of a better life. “My mother gathered up all the money she could to make the move north,” Chavez-Hemaidan remembers. “I remember picking up cans on the side of the road to sell them at the recycling center to contribute to the move.”

But things did not get better for Chavez-Hemaidan and her family on 18th and Ashland in the lower west side area of Chicago called Pilsen. In fact, things got worse.

“Even though Cameron Park is poor with all of the drug trafficking and human trafficking going on, the children were isolated [from the illegal activity]. Things happened where they could not see it,” she says. “In Chicago, we could see the drugs and gangs everywhere. I remember looking out the back window and seeing a guy get bludgeoned to death in an alley. That was hard to see. Gangs everywhere. Drugs and violence.”

The hardest times were when her family became homeless and lived in a back of a church. “I decided to drop out of school,” Chavez-Hemaidan remembers. “I remember Texas having beautiful schools. In Chicago, there was a metal detector and a line [to get into school]. The school is in disrepair, there are gangs everywhere, and some girl gets stabbed in the bathroom. All of it together was too much.”

So Chavez-Hemaidan went to work. She helped her mom sell tamales on the corner to people in the neighborhood for awhile until she was 16 and old enough to get a job to support her mother and little brothers.

“A lot of people around me were joining a gang or getting pregnant,” Chavez-Hemaidan remembers. “I always knew that I was smart. I was always top in the class — number one or number two. I knew I had more in me. I loved to read. I knew there was a big wide world for me. I just didn't have a chance. Yet. I told myself that when I grow up, I'm going to give myself a chance. I can't get pregnant and I can't get into drugs; I have to make it. But I knew that going to that school was a bad idea.”

So she would continue to read and go to the library like crazy — hours and hours of science, social studies, history, and math. “I spent a lot of time in the Harold Washington Library — seven floors of anything in the world you want to read,” she says. “I have always loved libraries. Free knowledge.”

She met her future-husband on match.com and she soon would end up in Madison. In 2008, after her daughter, Aliyah, was born she realized what she needed to do. “I realized that one day I was going to have to explain myself to her,” Chavez-Hemaidan says. “I would need to tell her, 'You need to go to school. You need to do this.' And without a high school diploma myself, I could not tell her much. I couldn't bear the idea of my daughter thinking she does not have to try because I didn't.”

So Chavez-Hemaidan finished up her high school with the General Educational Development (GED) program at Madison College. “Everybody was so nice at those prep classes. I will never forget them,” she says. 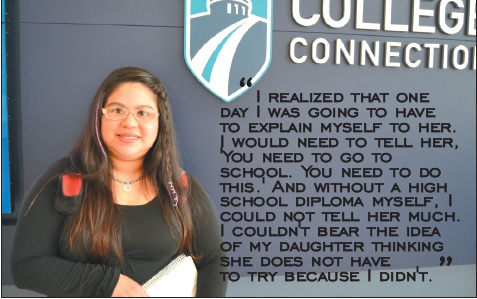 She did beauty school for a year before she came across the Edgewood College Returning Adult Accelerated Degree program. “I graduated beauty school in October and two weeks later I started at Edgewood,” she remembers. “But I wasn't ready for college-level work. There is so much more to college. You need to be prepared. I wasn't ready. I did well; I got a 3.2 [grade-point average] there, but it's so expensive. I remember thinking to myself, 'I can't afford this school!' And I remember that Madison College was so nice and their tuition was really affordable. Maybe if I transfer out for a little while in an environment where I can take some math classes and knock out some of these requirements and [then] transfer back.”

What she didn't count on was the big, beautiful family experience she had Madison College. “The people that I have met here inspire me,” she says. “And sometimes I am told that I inspire them … which is humbling because I came here feeling so needy.”

Chavez-Hemaidan's been getting really good grades the last two years at Madison College. “The tutors here are fantastic. I went from doing elementary math to trigonometry and calculus,” she says. “I'm giddy. I'm doing calculus. I feel so accomplished. How does a girl like me do calculus?”

Chavez-Hemaidan will be returning to Edgewood College in the fall where she has three semesters left. “It is expensive and the workload is tremendous, but I've been very well-prepared here to handle it,” she says.

Her major is business management, but Chavez-Hemaidan does not plan on stopping at a bachelor's degree.

“I see myself going on to get a master's [degree] some day and breaking some glass ceilings somewhere,” Chavez-Hemaidan says. “But what I ultimately see myself doing is getting a scholarship program [going] for older students that will take them from a community college to where they need to go. Because one of the toughest things about being an adult student is that you have a family. You have children who say, 'Mom, please put your schoolwork down and come and spend time with me.' But there isn't that option. Many nights I cry when I can't read my daughter a book and I have to study. It breaks my heart. But I know that if I don't finish, my situation will never improve. And my daughter will suffer the consequences. So I just can't stop.

“Who knows how many adult students could do incredible things in the world, but they have to quit because they have to feed their children?” she asks. “Everybody deserves a chance to shine.”

Chavez-Hemaidan is the Madison College state ambassador to the Wisconsin Technical College System (WTCS) where she is a leading voice and advocate for community colleges across Wisconsin and she represents the interests of the 39,000 students on five campuses in a district that encompasses 12 Wisconsin counties.

“It's an honor but it's also a tremendous responsibility and I hope I can do right for them,” she says. “Among them, I see mothers, daughters, sons, grandmas, and grandpas. I see families behind them. They all work so hard. I've seen students that I've met here who are crying as they try to get through finals. They have tough issues at home but they keep trying hard. They deserve a chance to shine. I hope I can represent them well and that I can help bring whatever funding or acknowledgment to them that I can.”

Chavez-Hemaidan is also a Phi Theta Kappa honor student and a Latina representative in the college’s Diversity Task Force and Women of Color Network. She has had an amazing journey from poverty to higher education and she is well aware that there are millions of people like her who are facing incredible odds. Her message to them if they are reading this article is simple: “I've been reading this article about luck and there are three kinds of luck. The one that I believe in the most is the kind of luck that you make yourself because you have hope and you do something about it,” she says. “You gotta believe that you are better than what goes on around you, but you also have to do something about it. The world is full of resources. Reach out. Ask. Dig deep. Be interested. But always believe.”