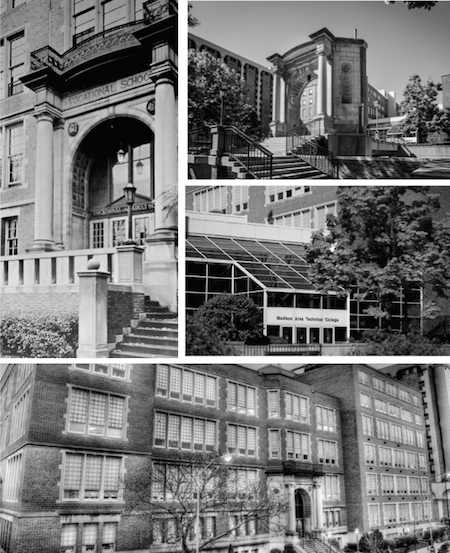 Images of the downtown Madison College campus over time. (Courtesy of Madison College)
“It would offer the training that leads to a job. If you focus on a community and their needs, then you have a grand opportunity to improve the quality of life and economic development input they have,” said Madison College President Jack Daniels on the creation of a new Southside campus.
A proposal to close Madison College’s downtown campus and create a new Southside location hit another recent roadblock.
In a recent vote 4-4, the college’s board decided to postpone any official decision on the proposal, which was first recommended in April.
Closing the downtown location and creating a new Southside campus is one piece of a three-part recommendation made by Madison College President Jack Daniels after an independent study was conducted on facility conditions, enrollment trends and student demographics at the downtown and current south and west campuses.
The board did, however, vote in favor of closing the college’s Westside location.
The college’s faculty, students and staff, as well as members of the communities neighboring the school’s downtown campus, turned out both in support and opposition to closing the downtown campus and creating a new Southside location.
Many of those who spoke in opposition were critical of the plan’s rapid progression and how little input the proposal had received from community members and government officials.
Several Madison alders who spoke at recent board meetings offered a similar sentiment, including Alds. Ledell Zellers, Marsha Rummel, Zach Wood and Mike Verveer, who read a signed letter to the board urging more time and a more thorough investigation of the plans.
Capitol Neighborhoods, Inc., an organization representing the five districts surrounding the state capitol, also voiced concern. While neither supporting nor opposing the proposal, the group circulated a press release in mid-May saying they were “disheartened” by the suggested plans.
In the document, the group’s board members indicated they were unaware that the substantial investments made in the Truax Campus, from the approved 2010 $133.7 million referendum, would lead to the subsequent deterioration of the downtown facilities. They went on to stress the importance of the 211 N. Carroll Street location downtown in offering students access to downtown art museums, businesses, bus lines as well as to the University of Wisconsin-Madison campus and resources.
Those in support, however, are hopeful the plan will push through.
Supporters who spoke in front of the board argued that the high costs of repairing the school’s aging buildings makes moving to a new location significantly advantageous. According to estimates presented at an early-May meeting, the expense of renovating the two downtown buildings and classrooms would total over $28 million. The appraised value of the site in April 2014 was only $12.3 million.
In addition, enrollment at the downtown campus has seen a steady decline, dropping by nearly 30 percent between 2013-2014 with the move of the community college’s health education programs to the Truax campus. The college’s culinary program, funded by leftover money from the 2010 referendum and which was originally supposed to be headquartered at the downtown location, was moved to the Truax campus instead, pulling students and programs away.
When the new barber and cosmetology training spaces open at the Truax campus in 2017, the downtown campus will see additional declines in the use of the downtown facilities.
Citing such numbers, proponents of the move now think the college’s resources might be better spent in other areas of Madison and many point to underserved communities on Madison’s Southside.
Demographically, this area is among the most impoverished in the city. It has one of the lowest levels of educational attainment and highest levels of unemployment. Many supporters are hopeful that a two-year educational institution might better those living there.
Madison College President Jack Daniels is one person who sees the move as highly beneficial to the Southside.
“It would offer the training that leads to a job. If you focus on a community and their needs, then you have a grand opportunity to improve the quality of life and economic development input they have,” he said. “This doesn’t just impact South Madison, but the entire region. The quality of workforce goes up and it attracts businesses who want to have a quality workforce.”
The deadlock vote, with one board seat vacant, means involved parties will now need to go back and more extensively discuss the options on the table. They will be asked to investigate sites that might be used by Madison College on the Southside and programs that might be offered. They will also be asked to reexamine the relationship of Madison College to the downtown’s economy.
Should the plan move forward and the downtown campus be closed, many people want to see the future of the campus’ historic facilities, which once housed Madison Central High School, be thoroughly discussed by the community. In their statement, Capitol Neighborhoods Inc. asked for a commitment by the college “to maintain a significant downtown presence for students, faculty, and the community.”
According to officials, however, the proposal probably will not be revisited until early next year when the board has received more information on the proposed plans.