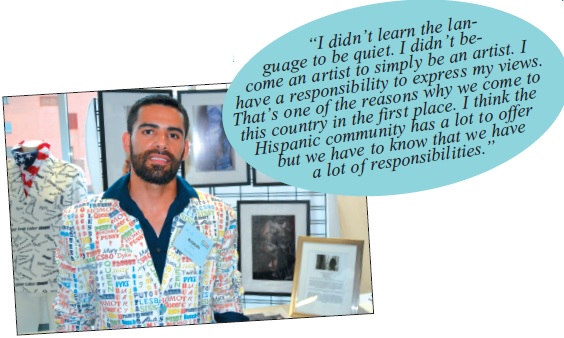 Cruz would soon find a one-bedroom efficiency apartment and another job —this one at the Edgewater Hotel. “So, I’d work until 3 p.m. go home and change and then go to my other job until 10 p.m. I did that for a while,” he says. “Once I made enough money I started taking art classes at MATC [Madison Area Technical College].  I continued to do a lot of art on my own.”
Cruz would go on to work at St. Mary’s Hospital for seven years working his way up to dietician assistant.
Meanwhile, running had also always become a tremendous passion since his days as a high school standout in Delavan. One day, while Cruz was doing his marathon running, he met a friend who was thinking about opening a store. “We ran. We talked about it. We brainstormed. He ended up opening the store and a year later I came in and have been with Berkeley Running Company,” Cruz says. “I am the manager of the store on University Avenue.”
By day, Cruz is working in the field of one of his passions — running. The rest of the time, Cruz is busy with his other passion — art — where he has won numerous awards and critical acclaim. “I’m an artist and I use different media to express myself. I can take a photograph, I can write, I can paint. I can do collages,” Cruz says. “What I love about photography is that it is a moment in time that people will relate to in their own personal way. I can take a picture … and I know what it means to me. But if you look at it, you’re going to basically see yourself reflecting back because what you see is based upon your own personal experience. Photography is such a beautiful way to communicate a message without imposing it upon people.”
Cruz is planning an exhibit in Madison that will be thought-provoking and controversial.
“I didn’t learn the language to be quiet. I didn’t become an artist to simply be an artist. I have a responsibility to express my views,” Cruz says. “That’s one of the reasons why we come to this country in the first place. I think the Hispanic community has a lot to offer but we have to know that we have a lot of responsibilities.”
I ask Cruz how his life would have been different if he had not taken some chances … maybe not been so outspoken and not tried to pursue his dreams.
“I probably would have just worked two jobs and sent money back to Mexico and never ever explored things that I have discovered since,” Cruz says. “I probably would have missed my life. You have to take a chance. As a community, we Latinos have to know that we have so much more to offer, but if we don’t make that effort, people will never know.
“Life is an amazing experience. If you don’t cry, you won’t know what laughter is.  Most of the time when we go through tough times, there’s something better waiting at the end,” Cruz adds. “So far, all of things that I have wanted to accomplish, I have … but there’s so much more that I want to do. Especially, with my art. I have big ideas … big exhibits that I want to do.”