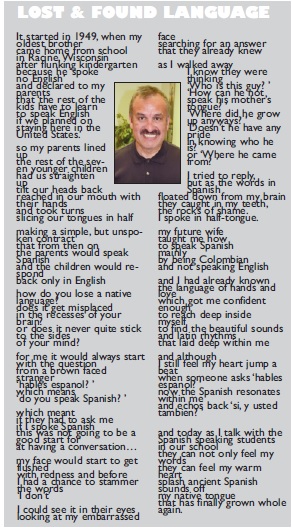 A book signing for “I Didn’t Know There Were Latinos in Wisconsin” was held this past Sept. 28 at Madison Central Library
“We’ve outreached and got many new voices but we have had a few that have been in all three [books] since the very beginning including Daisy Cubias and Margarita Dumit. So it’s a great mix,” Mireles tells The Madison Times in an interview at Melly Mel’s on Madison’s south side. “We have new, younger writers getting started in the field and established writers who have been published many times.”
This third volume in the series includes the work of more than 40 authors of poetry, essay, memoir, and fiction and demonstrates once again the breadth and depth of Latino/a writing and literature in Wisconsin. On the cover is a picture of Mireles’s mother and two sisters in a field on a car with Wisconsin license plates. The picture was made by Mireles’s nephew.
“I Didn’t Know There Were Latinos in Wisconsin is organized by themes. There’s a really interesting section that talks about speaking Spanish. “I have a poem called ‘Lost and Found Language’ [see sidebar at right] telling the story of when I grew up and when my oldest brother came home after failing kindergarten. He told my parents, ‘The rest of the other 11 kids are going to have to learn English if they are going to do well in school,’” says Mireles, who is executive director and principal of Omega School, an alternative, adult basic education and diploma completion program on Madison’s south side.
“As I grew older and began to do so much in the community, I felt like I should be able to speak more Spanish.  It was always a source of personal pain that I couldn’t speak it,” he adds. “When I met my wife, Clara, who was Colombian, she didn’t speak a word of English … so I had to start trying in Spanish. With her, I was able to reclaim my language and I talk about my tongue growing whole again.”
Other themes that are touched on are living in Madison as a Latino and the longing for Latinos to go back to their home country.
“There’s just a wide variety of topics — 40 different people; 200 pages,” Mireles says. “It gives some interesting perspectives on how we as Latino see things. Some people write about love; some people write about their moms and dads. Some people only have one poem; some have five or six.”
I mention to Mireles that since he put together the first “I Didn’t Know There Were Latinos in Wisconsin” compilation a quarter-century ago, that there are many, many more Latinos here in Wisconsin; especially in Madison.
“We have definitely grown in population since then,” Mireles smiles. “In Wisconsin, there are now more Latinos than African Americans. That’s something that I thought I would never see in my lifetime.”
But despite their larger numbers and the important place they play in our cultural fabric, they are a very silent population. The anthology is a chance to dissect: What does it mean to be Latino in Wisconsin?
“We just want to keep encouraging people to write,” Mireles says. “There are so many great Latino stories to be told. We’re going through our own things that nobody else is going through. A lot of people have a great story to write but they are too shy to write it. I just want to tell them, ‘Don’t be afraid.’”