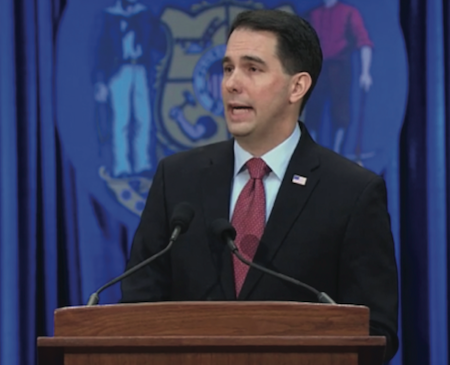 Many websites have corrected or retracted stories about Governor Scott Walker this week in response to Walker’s proposal to remove requirements of reporting sexual assault incidents to the state government.
Walker, who may be the 2016 Republican candidate in the presidential election, faced an attack from left-leaning website “Jezebel” last Friday with a headline reading “Scott Walker Wants To Stop Reporting Sexual Assault.”
Jezebel reporter Natasha Vargas-Cooper described Walker in her report as “a small-time guy who is having a big-time moment by playing the conservative werewolf” due to his proposal to delete the requirement that Wisconsin Universities report sexual assault cases to the state Department of Justice.
However, a spokesman from the University of Wisconsin clarified that the University asked Walker to delete the requirement of reporting sexual assaults to the state because campuses already submit this information to the federal government. The clarification led to a correction from Jezebel, an altered headline from Huffington Post and a full retraction from The Daily Beast.
The University claims that submitting the information twice to both the state and federal government is redundant due to the federal Cleary Act. Under this act, publicly funded schools are required to report sexual assault incidents to the federal Department of Justice.
The deletion of reporting sexual assault cases to the state DOJ will also include cutting out information regarding sexual assaults from orientation programs for both current and new UW students at all UW campuses, as well as deleting the requirement that University employees must report to the dean of students when they either witness an assault or hear of an assault from a student.
According to the University, submitting sexual assault information solely to the federal DOJ does not lesson the 26-school system’s commitment to student safety and support. Alex Hummel, a spokesperson for the University of Wisconsin system, said the deletion will “allow us to focus on one quality, effective and accountable report which we currently provide to the federal government and share with students, families, legislators and others.”
In addition, a spokesperson for Walker assured that the issue of sexual assault remains a top priority for the governor, who is committed to the safety of students.
Vargas-Cooper submitted an update on Saturday stating that “After Jezebel ran this item yesterday, a spokesman for the University of Wisconsin came forward — over two weeks after the budget was released — to clarify: the University requested that Gov.
Walker deleted the requirements because efforts were redundant with their compliance of the Clery Act. Scott Walker’s camp assures that he’s committed to protecting victims. We reported this piece without full context, and while this piece conveys factual information, omission of that context for that information presents an unfair and misleading picture. We regret the error and apologize.”
Walker’s actions reflect his plan for the UW system to move towards a public authority model, which is something that some university leaders have stated that they desire, while others remain skeptical. The proposal to stop reports of sexual assault to the state DOJ is one of many changes hat would decouple the UW system from state law and oversight.
The new structure, which would are currently authorized under state control, which includes sexual assault reporting. The public authority model would increase the UW system’s flexibility in handling a $300 million budget cut over the next two years, which roughly equals a 13 percent reduction in state support. The debate is primarily focused on this multimillion-dollar budget cut from state universities.