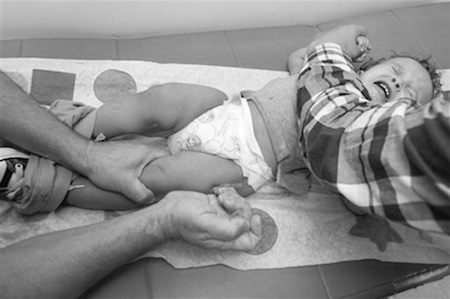  Pediatrician Charles Goodman vaccinates 1 year-old Cameron Fierro with the measles-mumps-rubella vaccine, or MMR vaccine at his practice in Northridge, Calif., Thursday, Jan. 29, 2015. (AP Photo/Damian Dovarganes)
In the face of a growing measles outbreak, President Obama is urging parents to heed modern science and vaccinate their children.
“There is every reason to get vaccinated — there aren’t reasons to not,” Obama said in an interview with NBC News. Excerpts from the interview were aired Sunday night and Monday morning.
“I just want people to know the facts and science and the information,” the president said. 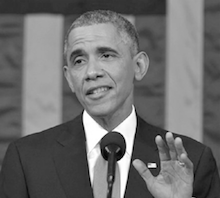 President Obama
“And the fact is that a major success of our civilization is our ability to prevent disease that in the past have devastated folks. And measles is preventable.”
An epidemic of vaccination skepticism — largely based on unfounded and discredited anti-vaccine beliefs — has contributed to the growing public health crisis.
Thanks to the widespread use of highly effective measles vaccination, the disease was effectively eliminated in the United States in 2000.
Yet, according to public health officials, a small — but growing — number of individuals are eschewing vaccinations for their children, which led to a record year for measles cases in 2014.
[Chris Christie clarifies comments on measles vaccine after call for 'balance' causes stir]
The current outbreak, which has centered on unvaccinated people who visited the Disneyland theme park in California, has resulted in measles cases in 14 states. Among them: New York, where health officials say a college student with measles recently traveled across the state on a train, potentially exposing untold numbers of travelers to the virus, according to news reports.
On Sunday, Centers for Disease Control and Prevention Director Tom Frieden warned that the growing number of unvaccinated people could result in a “very large” outbreak if the problem isn’t brought under control. The CDC said Monday that there are now 102 confirmed cases of measles in the United States, with hundreds of people being monitored for possible exposure.
Obama acknowledged that some people have concerns about the “effects” of vaccinations, but he cautioned, “the science is pretty indisputable.” He also noted that both his daughters Sasha and Malia have been vaccinated.
“You should get your kids vaccinated — it’s good for them,” Obama said. “We should be able to get back to the point where measles effectively is not existing in this country.”