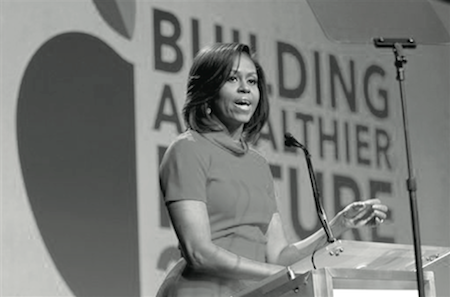 First lady Michelle Obama speaks at the annual Building a Healthier Future 2015 summit in Washington, Thursday, Feb. 26, 2015. (AP Photo/Jose Luis Magana)
WASHINGTON, D.C. (ASSOCIATED PRESS) — Michelle Obama said Thursday that the U.S. has undergone a “culture change” in the five years since she started raising awareness about childhood obesity. But as she celebrated achievements on multiple fronts, the first lady also warned that the progress that’s been made is “incredibly fragile.”
That’s because special interests “whose first priority is not our kids’ health” are “waiting for us to get complacent or bored and move on to the next trendy issue,” Mrs. Obama said at an annual health summit. She cited the fight over a recent child nutrition law as an example.
“Even today, some folks are still arguing that we just can’t afford to serve our kids healthy food, that it’s too expensive,” she said in a reference to Obama administration requirements that more fresh produce and whole grains be served in schools.
Many schools have adopted the standards but others contend they aren’t working and have lobbied Congress to weaken them. Schools must follow government nutrition rules if they accept federal reimbursements for free and reduced-price meals for low-income students.
A massive spending bill passed at the end of 2014 eased some requirements for serving whole grains and reducing sodium content in school meals. Republicans now in control of both houses of Congress are expected to try to relax additional requirements this year when the overall law governing child nutrition policy, including school lunches, comes up for renewal.
Advocates say the standards are important because many children eat most of their meals away from home.
“There are not enough voices talking about how, when we’re spending hundreds of billions of dollars treating obesity-related diseases, we can’t afford not to give our kids nutritious food,” Mrs. Obama said, urging advocates to “get in the game” like their opponents.
“We need to be out there every day tweeting, Instagramming, myth-busting. We need to use every tool at our disposal: social media, marketing and advertising, even some old-fashioned community organizing,” she said.
Patricia Montague, chief executive of the School Nutrition Association, said the administration has said the new rules would cost schools an additional $1.2 billion this year. At the same time, more than 1 million fewer students are choosing to eat lunch at school each day, she said, reducing revenue.
“We hope the first lady will speak up in support of SNA’s request for adequate funding for struggling school meal programs and flexibility to help school nutrition professionals plan healthy, appealing meals,” Montague said in a statement.
The School Nutrition Association is an industry-backed group that represents school and cafeteria workers and food companies that sell to schools. It is holding its annual legislative conference next week and its members plan to lobby lawmakers on Capitol Hill.
In her remarks, the first lady said one measure of the past five years is that food companies, fast-food restaurants and convenience stores are “racing like never before” to make and sell more nutritious food. Schools are planting vegetable gardens and replacing pizza lunches with fresh produce and whole grains. Companies are rewarding employees for eating well and exercising, while she said it seems everyone is wearing a fitness bracelet.
“Five years ago all this stuff would have been considered cutting edge,” Mrs. Obama said. “But now, today, it’s our new norm.”
She also singled out the Georgetown women’s basketball team for giving away kale to the first 100 people who attended a recent home game.
“Now that definitely wasn’t happening five years ago,” the first lady joked.
Larry Soler, chief executive of the Partnership for a Healthier America, the conference sponsor, said that when the nonprofit organization started five years ago, he began by approaching companies and asking them to consider making more healthful products.
“Now, it’s more likely that companies are coming to us and saying, ‘Hey, we want to make these changes,'” Soler said in an interview. “Consumer demand is really now what’s driving these changes.”