The Urban League of Greater Madison Young Professionals group is standing at the forefront of civic engagement and providing a voice for young professionals in service, policy, and advocacy.

“When you join the Young Professionals group you become part of a movement and it's more than an organization,” says Nia Trammell, president of the Urban League of Greater Madison Young Professionals. “When you join, you are committing to your community, to helping children improve their educational outcomes, and your committing to helping people who are unemployed or unemployed get back into the workforce in a meaningful way.” 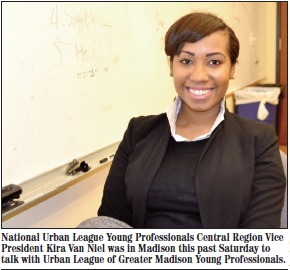 “I'm here to provide the resources — sometimes that looks like funding but other times it looks like best practices, expertise, and connections to make the chapter presidents’ jobs a little less difficult,” Van Niel tells The Madison Times. “Honestly, since we have 62 chapters to date and we've been around for 15 years, there have been tons of ideas that have gone through the organization and chapters don't necessarily have to reinvent the wheel.”

Van Niel, who was in Milwaukee earlier in the day, says that she is in Wisconsin to develop and to share best practices. “I have been a member of my chapter in St. Louis for six years,” says Van Niel, who is originally from Washington D.C.  “I've seen every tier of responsibilities for being a member of this movement. It's natural for me to come in here and be able to impart some of my experience to help the chapter president and the board.”

As part of the Urban League Young Professionals, she adds, people are learning and growing and making an impact on the community.

“With Young Professionals, it takes that personal and professional individual development and you end up being sort of the conduit in the community; you end up being that representation to the community,” she says. “By way of perfecting yourself to being a true representation of what you want, you are now able to help the community in a much more confident way and to show an example of what it means to set goals, to personally develop, [and] to take vested interest in your own well-being but to then come back and spend time with folks and help them get to the same point. It's a portal. You develop yourself so you can develop others.”

The genesis for ULGMYP started with a Betty Lou Cruise on Lake Monona in 2011.  In that boat, young people came together and just talked about what they wanted to see in the community.

“We have young professionals from every walk of life and on that cruise we talked about issues facing our community and what we could do as young professionals to tackle those issues, and one of the things that flowed from that was forming a Young Professionals group,” Trammell says. “From there, we met, we organized, and we got it started.”

ULGMYP caters to people ages 21-45. “But we've always said that if you are young at heart, you are a young professional. If you believe in this movement then we welcome you,” Trammell says. “The bottom line is that it doesn't matter what your age is as long as you support our mission.”

Last year, for their national day of service, the ULGMYPs went to Badger Rock Middle School and brought sustainability education to the students. “Those students were just so amazing to work with,” Trammell remembers. “They were inquisitive. They absorbed the programming. I think they learned real-life lessons about what it means to be a steward for the environment.”

This year, the Young Professionals will be doing their first major fund-raiser. On March 29, they will be hosting the First Annual Emerge Gala at the Concourse Hotel. The Emerge Gala will bring outstanding young  professional leaders together for an evening to celebrate the many contributions to the community.  “We are very, very excited about this event. It will be bigger than the Urban League Young Professionals,” Trammell says. “What we intend to do is to bring together all the young professional groups in the Madison area and give away awards in various categories to young professionals.”

The Emerge Gala will also raise funds to support the Urban League of Greater Madison's educational programs including the Schools of Hope Program, ACT College Readiness Academy, and the Scholars Academy. “One of the things that we've decided early on is that we are going to put an emphasis on education so we've pretty much decided that we're going to adopt the Scholars Academy as our signature program to service,” Trammell says.

The ULGM Scholars Academy helps prepare middle school students for a rigorous college preparatory program when they enter high school. The Academy is designed to instill excellence, pride, leadership, and service so that young men and women have the foundation that they need to realize their academic goals and be successful in high school and beyond.

“We won a grant for a proposal as young professionals to connect with the Scholars Academy — it's really a big passion of ours,” says Langston Evans, secretary for the ULGMYP, who has been with the group from the very beginning. “Our focus this year is getting middle school students to understand how their education connects to their future careers. So, we're in the process of really finding ways to bring in professionals that connect [the students’] learning in the classroom to their careers. We are looking to bring in diverse people from the community and really engage the young people in hands-on activities.”

ULGMYP is getting the conservation started with middle-schoolers and asking that important question: How does what I do in seventh-grade math matter to what I will be doing when I am 25 years old?

“We want to be direct and honest with the students,” Evans says. “We're focusing on STEM [science, technology, engineering, and mathematics]. We know that folks of color and women are underrepresented in that area. We are bringing in charismatic people with hands-on activities [and] having really short and focused conversations. We know that this makes a difference. There is research that if students can really connect what they are doing today with their futures that they are much more likely to do well in school, go to college, and finish college.”

Van Niel says that she was very impressed with the ideas and energy of the ULGM Young Professionals she met in Madison on her visit.

“In the conversations we were having this morning, part of my interest was to try and understand the particular dynamics in Madison. How does a chapter become successful? First, we have to understand the environment that we are trying to thrive in. We were just talking about personal intentions and organizational expectations and how that fares with the community which you are serving and engaging,” Van Niel says. “Then we are trying to connect it with a potential solution. Our other objective is to bring the message of the National Urban League and the National Urban League board here. We have a big conference coming up in July that will be a great opportunity for young people to convene, do some thought-sharing, and meet their colleagues from across the nation.”

The 2014 National Urban League Conference will be held in Cincinnati, Ohio from July 23-26. For four power packed days, political, business, and community leaders will convene and celebrate the 50th anniversary of the Civil Rights Act while confronting record job losses with strategies and actionable plans for recovery and economic empowerment for all. The Madison chapter will be one of the smaller and the younger affiliates at that event.

“The thing about small chapters in smaller areas — especially those who aren't in your typical big, urban areas — it's really finding what that resonating theme is to galvanize in that community. And that's not really all that exclusive,” Van Niel says. “Madison is probably competing with young professional chapters the same way New York competes with young professional chapters…. Actually, it's probably more difficult [here] because you know everybody and you feel a loyalty as opposed to getting lost in the abyss of a much larger city.”
Van Niel says what she enjoys the most about her job is traveling and getting to meet new people and, of course, working towards solving problems.

“We're not selling good and products here; what we're selling are pathways to economic self-reliance,” she says. “We can provide that outlet for civic and social action and political engagement but we can also provide that outlet for professional development and growth.  We want the community to feel encouraged and engaged. We want folks to able to participate in the election process, folks [to be] able to send their children to school, afford health care and do the things that everybody wants to do. My goal is to help people help people. I really enjoy that.”

For more information about Urban League of Greater Madison Young Professionals, contact Nia Trammell, yppresident@ulgm.org
For information about nominating leaders in our community for the 2014 Emerge Awards Ceremony, e-mail ypsocial@ulgm.org. Nominations are due Feb. 21.